By Howard Schneider and Ann Saphir

WASHINGTON (Reuters) – The Federal Reserve kept its loose monetary policy intact on Thursday and pledged again to do whatever it can in coming months to sustain a U.S. economic recovery threatened by a spreading coronavirus pandemic and facing uncertainty over a still undecided presidential election.

Results from Tuesday’s presidential vote were still being tabulated in a few key states, though Democratic nominee Joe Biden was near the number of electoral votes needed to win the White House.

The U.S. central bank did not speak about the election in a policy statement released after its latest two-day meeting, but Fed Chair Jerome Powell is likely to address any concerns about the weeks ahead in a news conference at 2:30 p.m. EST.

“Economic activity and employment have continued to recover but remain well below their levels at the beginning of the year,” the central bank’s policy-setting Federal Open Market Committee said in a unanimous statement, which left the central bank’s key overnight interest rate unchanged at near zero. “The COVID-19 pandemic is causing tremendous human and economic hardship across the United States and around the world.”

In a statement virtually unchanged from the one issued at its September policy meeting, the Fed repeated its pledge to use its “full range of tools” to support the economy, and promised not to consider raising interest rates until maximum employment had been restored and inflation was heading above its 2% target.

The Fed said it would for now continue buying “at least” $120 billion per month in government bonds, and use its other tools and programs as needed depending on how the economy evolves.

The U.S. employment report for October, due to be released by the Labor Department on Friday, will give the latest glimpse of how quickly the economy is pulling the millions unemployed by the pandemic back into jobs.

But beyond that the Fed will now be waiting to see whether Biden does indeed win the presidency or whether Republican President Donald Trump manages to remain in power, and what either scenario could mean in terms of additional government spending to help those out of work.

Thu Nov 5 , 2020
Stocks jumped on Thursday on hopes the winner of the U.S. presidential election would soon be determined. The Dow Jones Industrial Average traded 613 points higher, or 2.2%. The S&P 500 climbed 2.4% and the Nasdaq Composite advanced 2.6%. Those gains put the major averages on pace for their biggest […] 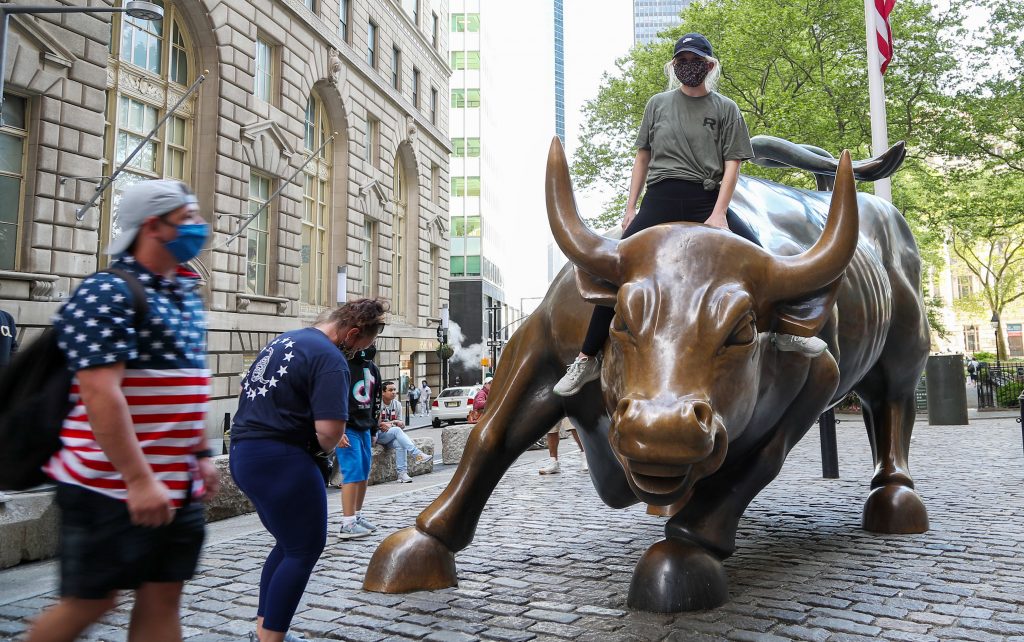