Ann Hiatt remembers Jeff Bezos didn’t like to sit down for long.

As the Amazon CEO’s executive assistant from 2002 to 2005, Hiatt was charged with keeping track of Bezos’ whereabouts. At that time, the fast-growing internet retailer had moved into an Art Deco-style building that was once the site of a U.S. Marine hospital. It would be years before Amazon moved into a series of gleaming glass buildings in downtown Seattle, with a campus that spans over several city blocks and encompasses three glass orbs filled with plants form around the world.

Bezos refused to take the elevator up to Amazon’s 14th floor office in the historic building, commonly referred to as the old PacMed Center, Hiatt recalls. Instead, he would run up and down the steps, often, without breaking a sweat.

“He’s like a puppy. He would do laps and he was never tired,” Hiatt said in an interview. “That’s Jeff. He couldn’t be held back.”

That image of Bezos captures the relentless drive and energy that would propel Amazon’s meteoric rise from an internet bookseller to the world’s largest online retailer and cloud computing company.

Now, after almost three decades, the 57-year-old founder is preparing to funnel his energy toward other pursuits. Starting Monday — 27 years to the day after Amazon was incorporated — Bezos will transition to executive chair of Amazon’s board, handing the CEO title over to his one-time protégé, cloud-computing boss Andy Jassy.

Bezos is departing the CEO role at a time of great success for the company, with Amazon in February surpassing $100 billion in quarterly sales for the first time.

While Bezos isn’t going far, he’s still leaving Jassy to deal with many of the headaches of running the day-to-day business, some of which are more intense than before. Amazon is being probed by antitrust regulators in the U.S. and abroad. It faces pressure from lawmakers who say it should focus on being a better corporate citizen. Inside the company, employees routinely express grievances about working conditions and, on the front lines, have met with labor unions to explore the possibility of organizing.

Bezos was a vice president at Wall Street hedge fund D.E. Shaw when he got the idea to launch an online bookstore. He quit in 1994 and moved across the country to Seattle, where he bought a house in the suburbs and founded the company that would become Amazon out of his garage. The company was very nearly named “Cadabra,” but it sounded too much like “cadaver,” so Bezos chose Amazon instead.

The site opened for business on July 16, 1995. Its homepage greeted users with the proclamation of being “Earth’s biggest bookstore,” spanning one million titles and offering up “consistently low prices.” Within the first month of its launch, Amazon had sold books in every state in the U.S. and 45 countries around the world.

“I remember flying up to Seattle to visit the company in its offices at First Avenue, opposite a free needle clinic in a pretty seedy part of Seattle,” John Doerr, an early Amazon investor and chairman of venture firm Kleiner Perkins, told CNBC’s “Tech Check” on Friday. “We built these tables out of desk doors that we purchased from Home Depot. We went online with a very fast website and could deliver all the world’s books in a shorter period of time at better prices than anyone else in the world.”

After a successful IPO in 1997 that made Bezos a millionaire, the CEO successfully navigated Amazon through the dot-com bubble. By the mid-2000s, Bezos had begun to expand Amazon’s focus beyond online retail and into cloud-computing, video entertainment and devices. He took on far-flung projects outside of Amazon, such as founding rocket company Blue Origin, which he has funded by selling billions in Amazon stock.

Bezos often took the long view on Amazon’s business, which involved prioritizing growth over profits, much to Wall Street’s dismay. In one noteworthy exchange, former Amazon CFO Tom Szkutak pressed Bezos on Amazon’s budget for its nascent project for the Kindle e-reader, which launched in 2007, according to a former Amazon vice president. Bezos quipped back: “Well, how much money do we have in the bank?”

Bezos is the world’s richest man, making him the target of politicians and advocates who seek to reduce income inequality and see him as an example of unchecked corporate power. He’s now a regular guest at the Oscars and he’s steadily increased his presence in the nation’s capital by acquiring The Washington Post, among other means. He was thrust into the spotlight when he became a direct target of former President Donald Trump.

In interviews, former Amazon employees suggested that Jassy’s softer personality, along with the fact that he’s not widely known outside of Silicon Valley circles, could end up working to Amazon’s advantage as it stares down its critics.

“Andy will represent Amazon when Congress or other stakeholders come calling and demanding or requesting hard questions,” said John Rossman, an executive at Amazon in the early 2000s and author of “The Amazon Way.” “Maybe, in some ways, not being the founder will help him be even more effective at those dialogues.”

The next iteration of Amazon

The transition from Bezos to Jassy won’t change much. Jassy is steeped in Amazon’s corporate culture, having helped devise the core leadership tenets that guide employees.

Jassy also served as Bezos’ “shadow” in the early 2000s. Shadows act as a “brain double” for Bezos, offering another set of eyes and ears in meetings, Hiatt said. Known formally as a technical assistant, they’re copied on every email and flight itinerary and help recap each day’s events to prepare for the next one.

Shadows typically go on to esteemed roles within the company. For Jassy, that was spinning up Amazon’s nascent cloud-computing business.

Jassy helped advise Bezos’ next shadow, Colin Bryar, on how to take up the task. As Bezos’ shadow, he interacted with Jassy during meetings with Bezos’ S-Team, a group of top company executives, which would convene for four-hour breakfast meetings each Tuesday.

Bryar and other former colleagues said the AWS CEO possesses the same drive as Bezos but is known to take somewhat of a different approach in his leadership style.

Bezos can be opinionated, energetic and, at times, aggressive, people who’ve worked closely with the CEO said. Jassy often possesses a more mellow air, but can be just as intense, recalling specific details from presentations and pointing out discrepancies with a laser-like focus.

Jassy also has Bezos’ penchant for pushing employees to think bigger. Bezos sometimes became fixated on a certain project and, to some employees’ surprise, followed up regularly with teams to make sure they were on track.

“People would say, for example, my 23-person team, he’s met with me like every other week for two months,” said David Anderson, a former manager in Amazon’s AWS and device units. “So every once in a while, it was almost like this giant hammer comes in and smashes this problem out of the way because Jeff gets involved.”

Jassy resembles Bezos “more than any other” senior executive at Amazon, Anderson said, owing to his whip-smart intelligence and deep knowledge of Amazon’s businesses from top to bottom.

He recalled an AWS operations meeting that included top-level leaders, where Jassy dug deep into highly specific and technical matters.

“It just blew my mind because this is the guy that runs AWS and he is very familiar with very low-level details,” Anderson said. “It occurred to me that he was leading the organization for a very good reason. He doesn’t just think big, he knows the details.”

Mon Jul 5 , 2021
Bar tender Kim DePland, 38, attends a job fair for restaurant and hotel workers, after coronavirus disease (COVID-19) restrictions were lifted, in Torrance, near Los Angeles, California, June 23, 2021. Lucy Nicholson | Reuters American workers collectively saw a nice bump in their paychecks for June that may have to […] 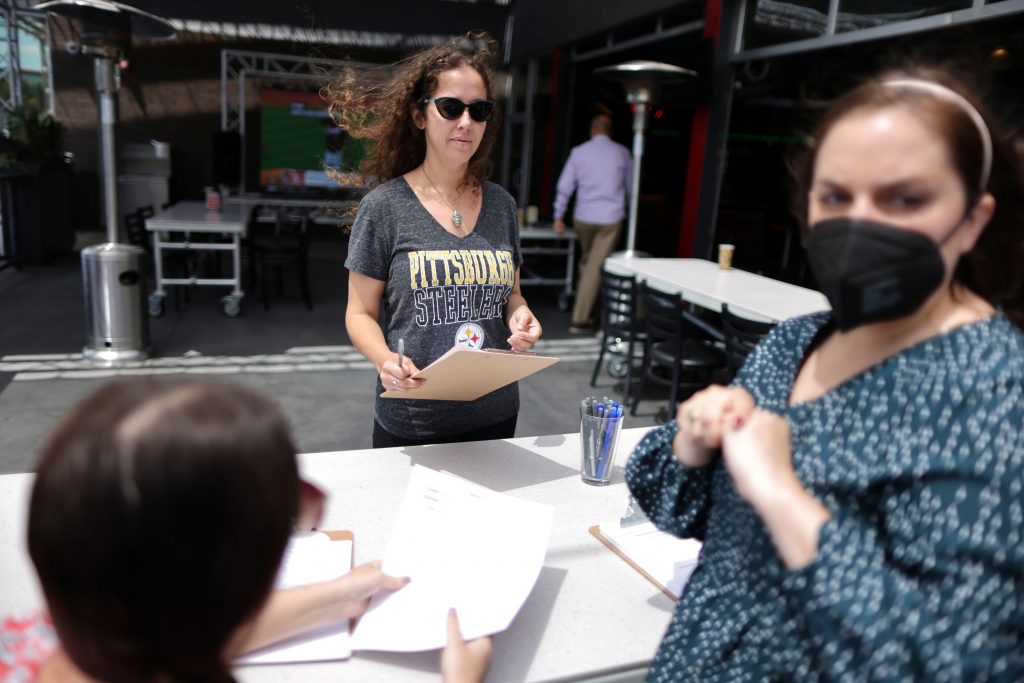