The logo of Airbus is pictured at the company’s headquarters in Colomiers near Toulouse, France, October 19, 2017. REUTERS/Regis Duvignau

PARIS (Reuters) – Airbus <AIR.PA> said on Saturday it had been ordered to pay 104 million euros in fines over a missile sale to Taiwan in 1992, the latest French arms company to reach a settlement over disputes arising from one of France’s biggest ever arms sales.

The scandal around French arms sales to the island in the early 1990s was one of a series of cases that underpinned accusations of widespread corruption during the final years of late French president Francois Mitterrand.

Airbus said in a statement that its subsidiary behind the missile contract, Matra Defense, was “reviewing the award before evaluating the next steps to take”.

The arbitration fine comes three months after Dassault Aviation <AVMD.PA>, radar supplier Thales <TCFP.PA> and engine maker Safran <SAF.PA> said they had been fined a combined 227 million euros ($276.80 million) in Taiwan to settle the 25-year-old dispute over the wrongful use of commissions in the sale of 60 Mirage fighters to the island.

“This was a commercial dispute and not a corruption allegation,” said an Airbus spokesman.

In a separate case, Airbus said it was in talks with Munich prosecutors that could lead to the termination of their investigation into alleged corruption in the sale of Eurofighter combat jets to Austria in 2003.

Airbus did not mention the status of a parallel Austrian investigation into the same arms deal.

The company and individuals including CEO Tom Enders are being investigated in Vienna over industrial deals that were built into the Eurofighter sale and have denied any wrongdoing.

Separately, Airbus faces UK and French investigations into the use of middlemen in commercial airliner sales.

Sat Jan 13 , 2018
Ralph Northam was sworn in as Virginia’s governor Saturday, replacing now-former Gov. Terry McAuliffe. At a chilly ceremony in Richmond surrounded by his family and, further back, a number of former governors, Northam took the oath to become the Old Dominion’s 73rd chief executive.  Northam, a Democrat, veteran and pediatrician […] 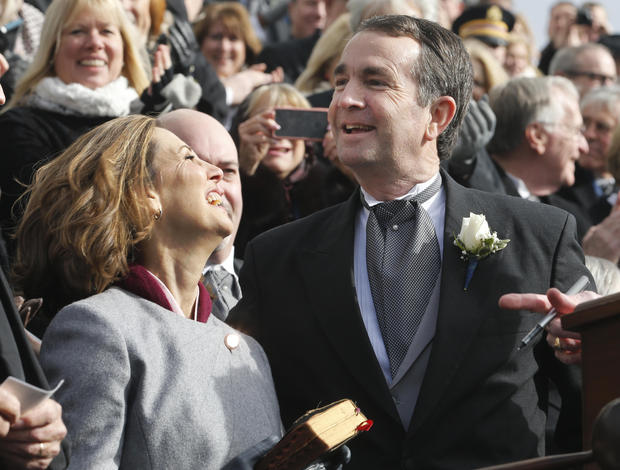