A fire official looks over the scene of a small plane crash, Monday, Oct. 11, 2021, in Santee, Calif. At least two people were killed and two others were injured when the plane crashed into a suburban Southern California neighborhood, setting two homes ablaze, authorities said. (AP Photo/Gregory Bull)

New details are emerging regarding a small plane crash in Southern California that killed at least two people.

According to witnesses on Monday, the plane descended quickly and clipped a UPS truck that was coming to a stop. The driver of the truck was killed and an explosion sparked multiple fires, in turn, destroying two homes and damaging several others.

The plane, which was coming from Yuma, Arizona, was owned and piloted by local cardiologist Dr. Sugata Das. He reportedly lived in San Diego, but often flew back and forth between his work and home.

Update 10/11/2021 5:30pm: Road sections in the immediate area of Greencastle and Jeremy Street remain closed at this time due to the plane crash earlier today. However alternate routes are open for residents who live in the area. SDG&E is also currently replacing a transformer pic.twitter.com/hyCC5Ab0Mm

Audio from live Air Traffic Control revealed the controller had told the pilot he was flying too low just before the crash.

“You’re descending sir, I need to make sure you are climbing not descending.22 gulf climbing.”

It’s unclear how many passengers were on the plane, but authorities said it’s unlikely anyone inside survived. An investigator from the National Transportation Safety Board is expected at the scene Tuesday. More information on the crash will be provided as the situation further develops.

IMF warns on inflation, says the Fed and others should be prepared to tighten policy

Tue Oct 12 , 2021
People wear face masks outside a supermarket on the Upper West Side in New York City. Noam Galai | Getty Images Central banks such as the Federal Reserve should be prepared to tighten policy in case inflation gets out of control, the International Monetary Fund warned Tuesday. While the IMF […] 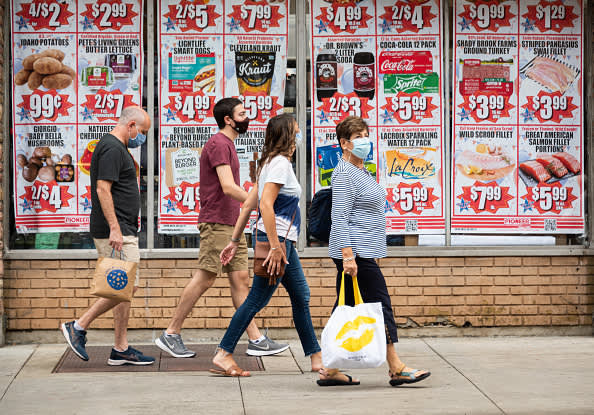