LONDON (Reuters) -Fear of inflation is back in vogue and tops nearly every 2022 investment outlook into year-end, but ageing populations and falling fertility rates from Berlin to Beijing may knock it off the catwalk yet again.

With headline and core inflation rates at their highest in decades, squeezing real incomes as economies recover from the conronavirus pandemic, debates rage about a return to the 1970s or even 1920s and strategists model scenarios from ‘stagflation’ to ‘growthflation’.

It’s back in the public zeitgeist too – Google trends show more searches for ‘inflation’ worldwide than at any point in the 17-year history of its search data – making it politically sensitive for leaders from U.S. President Joe Biden down.

Faced with its persistence for months, central banks seem to have quietly dropped a mantra that the post-pandemic spike in prices will be ‘transitory’ and now look set to return more quickly to pre-COVID monetary settings.

Many mega-trend analyses suggest it may be more than just base effects and bottlenecks as lockdowns lift, with some warning of ‘greenflation’ as climate fears accelerate moves to more sustainable energy before much of the new infrastructure is in place. And after a decade of electoral shocks fuelled by voter unease at stagnant household incomes, fairness and inequality has moved government agendas as some aim to redress the balance.

What’s more, fractious geopolitical trends between the West on one hand and China and Russia of the other raise fears of a rollback in the supply-chain trade globalisation that helped keep goods prices low for the past 20 years.

But one mega trend that still cools talk of overheating ahead is ageing demographics and falling per capita incomes, which the pandemic likely accelerated rather than reversed.

U.S. birth rates, for example, have been falling steadily for a decade. At 1.64 per woman, they are now far below the 2.1 replacement rate necessary to keep the population stable – a rate last seen in 2007. That decline picked up in 2020 after the pandemic hit, analysts at Washington’s Brookings think tank say, and confounded early predictions of a mini lockdown baby boom.

But rapid ageing due to falling births and longer lifespans is a worldwide phenomenon — most clearly in Japan, Germany, Italy and Britain — it is most pronounced in China where the Beijing had to rapidly abandon its one-child policy.

He argues this ageing would “act as a vacuum, sucking resources from the prime-age workers through taxation or debt-financed transfers, forcing central banks to hold rates at the zero-bound or quickly return after another failed attempt to combat rising inflation.”

But his main point is that comparisons between today’s supply-side driven inflation and that of the 1970s are way wide of the mark given the radically different demographic backdrop.

Between 1960 and 1985, the United States saw some of the most positive demographics in its history, largely due to the post-World War Two baby boom.

Basmajian showed that the 20-year rolling change in the U.S. age-dependency ratio – workers as a share of retirees and children – explained almost all of the long-term inflation trends of the past 50 years.

The counterview, outlined in a recent book by economists Charles Goodhart and Manoj Pradhan, is that demographic trends themselves could spur inflation by boosting workers’ wage bargaining power and cutting excess savings.

And others talk of the quick rebound from the pandemic and myriad government supports lifting birth rates again and stabilising the dire 2020 readings at least.

But the evidence from Japan, the country furthest down the ageing tunnel, points to a very different outcome where even in the midst of all the current angst, inflation remains dormant.

Analysts at Fathom Consulting this week highlighted the correlation between falling birth rates in Japan over the past 60 years and falling expectations of per capita economic growth over future decades – suggesting the latter led to the former to amplify a hit to overall output by reducing numbers of workers.

“It looks like a similar effect might now be playing out in China, potentially aggravating the growth slowdown there in years to come,” they concluded.

Whether you are a believer or not, 2022 may prove to be the year when we find out.

Fri Nov 26 , 2021
A person passing through the main street of the Christmas market in Barcelona, Spain. SOPA Images | LightRocket | Getty Images A top EU official said that news of a new coronavirus variant is “alarming” and admitted there could be implications for the region’s economy. A handful of nations, notably […] 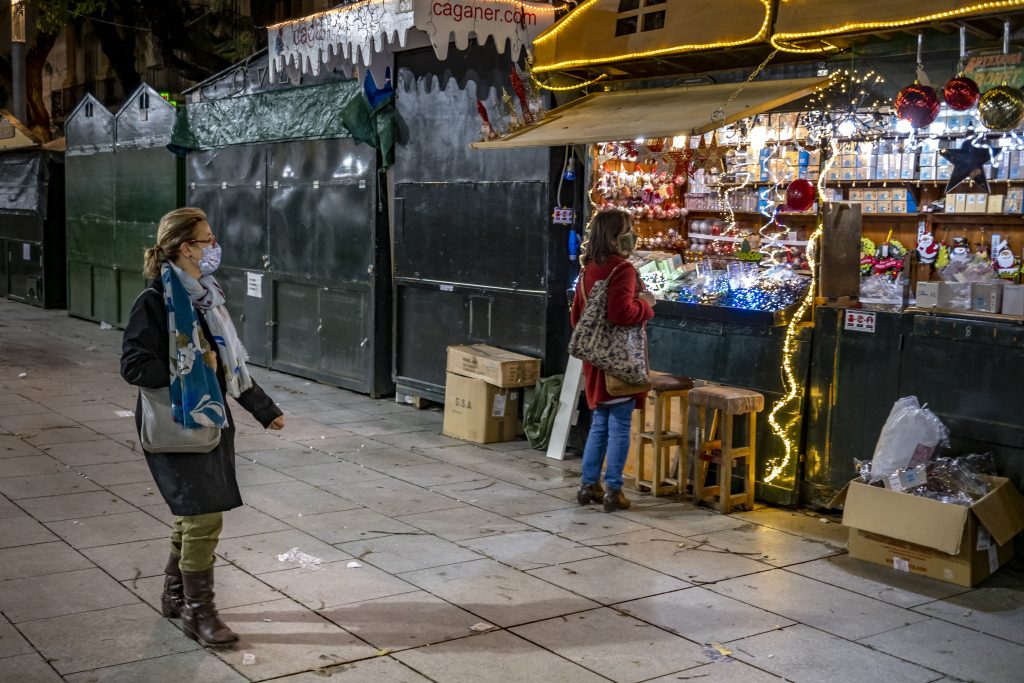