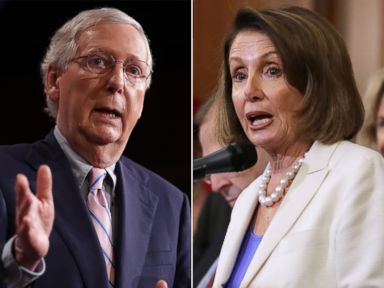 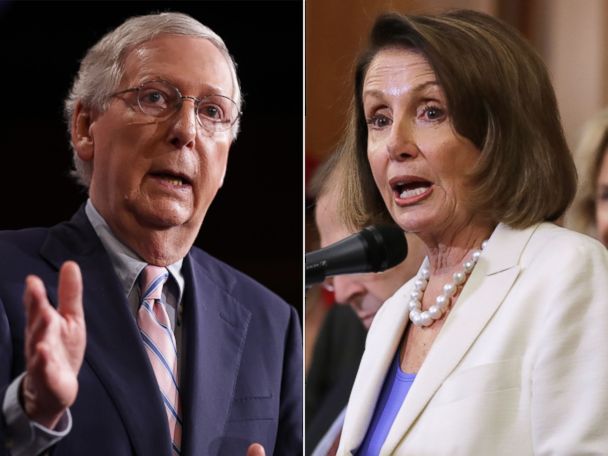 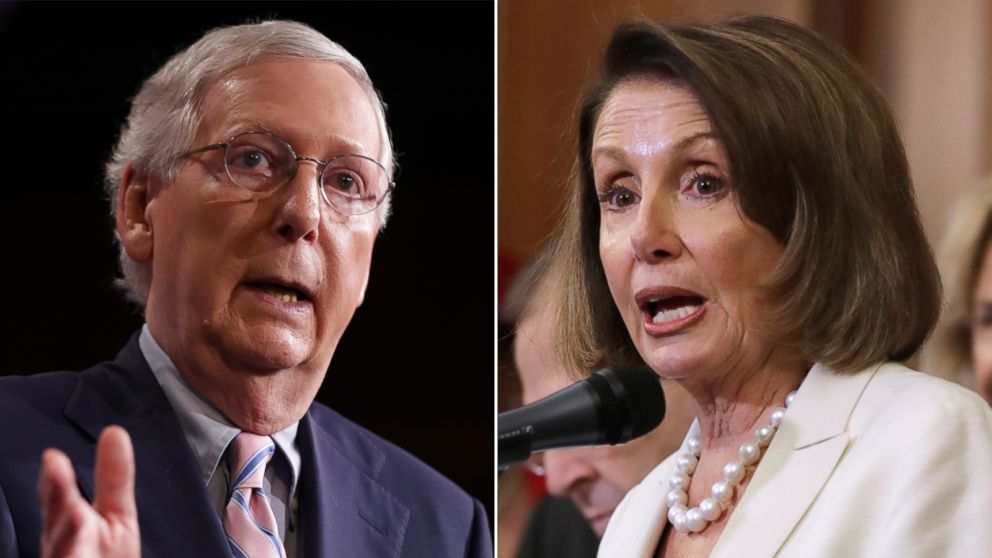 “Moments ago, the four leaders of the Senate and the House finalized an agreement. It will be another major rescue package for the American people,” Senate Majority Leader Mitch McConnell said on the floor Sunday night. “For the information of all Senators and more importantly for the American people, we can finally report what our nation has needed to hear for a very long time: more help is on the way.”

“As our citizens continue battling this coronavirus this holiday season, they will not be fighting alone,” McConnell said. “Now we need to promptly finalize the text, avoid any last-minute obstacles and cooperate to move this legislation through both chambers.”

House Democratic Leader Steny Hoyer informed the caucus that they will vote on a one-day stopgap funding bill Sunday night in order to avert a government shutdown, per Democratic aides.

A final vote on the spending bill and COVID-19 relief bill will be on Monday in the House, before it heads to the Senate.

McConnell outlined a $900 billion dollar package that includes, among other things, a second draw of the paycheck protection program.

“We’ve not worked so hard to save as many jobs as possible all these months only to fumble the ball with vaccinations already underway,” McConnell said.

“After a long and arduous year, after a year full of bad news, finally we have some good news to dealer to the American people,” Senate Minority Leader Chuck Schumer said. “Make no mistake about it. This agreement is far from perfect, but it will deliver emergency relief to a nation in the throes of a genuine emergency.”

After several months of partisan bickering over the size and scope of the relief deal, lawmakers agreed to a $300 boost in weekly unemployment benefits, $600 relief checks for individuals, more than $300 billion for small business aid and huge pots of money for schools, hospitals and vaccine distribution.

The agreement comes as 12 million people are set to lose benefits if pandemic-era provisions to expand unemployment eligibility expire. Millions across the country face eviction if a federal moratorium expires at the end of the year.

All this comes as the rising number of COVID-19 cases are taking a toll on the economy: The number of Americans applying for unemployment benefits rose again to 885,000 in the week ending Dec. 12 — the highest weekly total since September.

Congressional leaders worked through the weekend but a deal was stalled over disagreements related to the Federal Reserve’s lending powers.

Democrats cried foul over the last-minute squabble and accused Republicans of inserting partisan language that would kneecap efforts by the incoming Biden administration to respond to economic crises.

“Right now, Democrats stand together. There was no dissension in the caucus. We cannot make a change like this,” Sen. Elizabeth Warren, D-Mass., told reporters Saturday night on Toomey’s provision.

“We keep trying. We’re trying, but this is a new thing. And what they’ve asked for goes way beyond. This is the kind of thing that should have a strong legislative discussion,” Senate Minority Leader Chuck Schumer said.

Despite the 11th hour haggling, negotiators remained optimistic that a deal would be reached.

A spokesperson for Senate Majority Leader Mitch McConnell confirmed late Saturday night that an agreement had been reached on the Toomey matter.

“Now that Democrats have agreed to a version of Senator Toomey’s important language, we can begin closing out the rest of the package to deliver much-needed relief to families, workers and businesses,” McConnell spokesperson Doug Andres said.

Per a Democratic aide, Toomey agreed to drop the language prohibiting the fed from reestablishing lending facilities similar to the ones established in the CARES Act. Republicans also claimed victory, with Toomey’s team outlining the compromise as one that prohibits the programs from being duplicated without congressional approval.

But now, a government shutdown deadline at midnight Sunday is bearing down on Congress as it seeks to pass both the stimulus relief package and a must-pass $1.4 trillion stimulus deal.

The House is expected to vote on both packages first, followed by the Senate — but they are under time constraints and will likely need more time to get both packages across the finish line.

Leadership has warned members of Congress to keep their schedules open as they may have to work through Monday, and it would also require another short-term funding bill.

If lawmakers don’t approve a short-term funding deal in the meantime, a lapse could lead to a partial, low-impact shutdown.

Leaders expressed frustration earlier in the week that their negotiations were once again up against a tight deadline.

“I am so frustrated by the inability of us to act like adults, with responsibility,” House Democratic Leader Steny Hoyer of Maryland said Friday. “We have a government of 2 million people that are waiting every hour to find out if they are going to be working.”

“I think McConnell is the principle culprit. But I don’t think the rest of us are without blame,” he said.

McConnell remained upbeat on coronavirus aid talks over the weekend.

“I appreciate the good faith spirit that has characterized my talks with the Democratic leader, Speaker Pelosi, Leader McCarthy, Secretary Mnuchin. But the American people cannot feed their families or pay their bills with Congress’ good-faith discussions,” McConnell said. “They need us to act.”

The new COVID-19 relief legislation would “repurpose” over $400 billion in unused funds from the CARES Act, which Congress passed back in March — which means this bill will include about $500 billion in new funding if the $900 billion top-line holds.

Democrats acknowledged defeat in getting $160 billion in aid for state and local governments in the deal due to Republican opposition.

At the same time, McConnell has agreed to set aside liability protections for businesses, which he had said was a “red line” for Republicans.

Democrats and Republicans alike both fought hard to include direct stimulus checks for Americans at $1,200 — the same amount approved in the CARES Act by both chambers of Congress in March.

Hawley, who had been working with Sen. Bernie Sanders, I-Vt., on a direct check effort for several weeks, left the floor so frustrated that he said he may derail the short-term funding effort to prevent a government shutdown later Friday.

Hawley said he and other rank-and-file members have been left “in the dark for days” on what’s in the relief package and without assurances that there are direct checks in the package and a package ready to be voted on, he’s prepared to stand in the way of efforts to buy a bit more time with a short-term funding bill — known as a continuing resolution or CR.

“I have no idea what is going on and I’m not prepared to sign off on a CR until I know what’s going on,” Hawley said. “It’s beginning to reach the point of absurdity. It’s time for leadership to put on the table what they’ve got — it’s time for them to brief members on what they’ve got.”

“If we are going to spend hundreds of billions of dollars bailing out this, that and the other, surely we could start with reasonable modest relief to the working people in need in this nation,” Hawley said on the floor.

Sen. Ron Johnson, R-Wis., opposed the measure out of concern that it was ineffective and would drive up debt.

Sun Dec 20 , 2020
US Senate Majority Leader Mitch McConnell speaks during a news conference with other Senate Republicans at the US Capitol in Washington, DC, on December 15, 2020. Tom Brenner | AFP | Getty Images Stock futures rose slightly in overnight trading on Sunday as Congress managed to seal a coronavirus stimulus […] 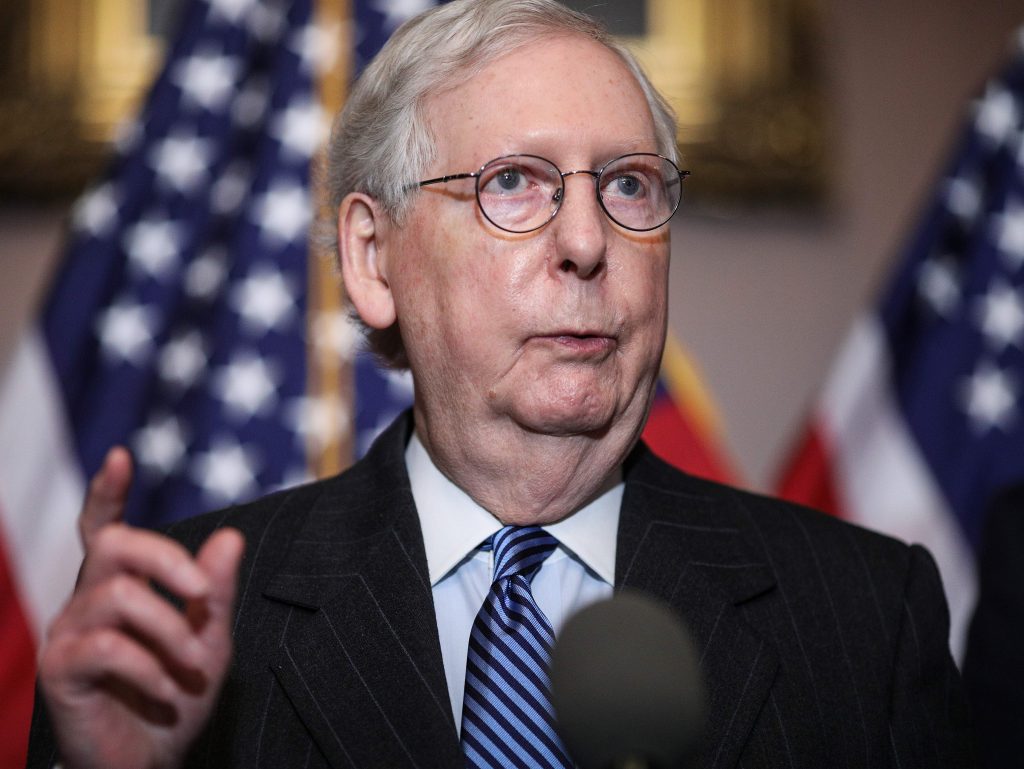