President Donald Trump gives two thumbs up to the crowd during the evening session on the fourth day of the Republican National Convention on July 21, 2016. (Photo by Chip Somodevilla/Getty Images)

A mainstream television network has admitted that President Donald Trump was right to question the origins of COVID-19 all along.  In a segment of “This Week” on ABC News on Sunday, correspondent Jon Karl had to admit Trump was right when he called for a probe into the Wuhan Institute of Virology.

Karl said, “we should find out what happened. This is one of the greatest crises our country has ever faced, and the world has ever faced. We need to know how it started. This was an idea that was first put forward by Mike Pompeo, Secretary of State of Donald Trump.”

“Some things may be true even if Donald Trump said them” – ABC’s @JonKarl re origin of COVID-19 pandemic. #ThisWeek pic.twitter.com/voC1ISBv4X

Over the past year, the legacy media dismissed the Wuhan lab leak hypothesis as a conspiracy theory. However, a recent House Intelligence report found there is overwhelming circumstantial evidence backing up that theory.

Karl ended his response on the matter saying, “some things may be true even if Donald Trump said them.”

Rolling to Remember forges ahead despite Biden Pentagon rejections

Sun May 30 , 2021
Staff Sgt. Tim Chambers salutes as motorcyclists participate in the “Rolling to Remember” motorcycle rally as they ride past the Lincoln Memorial on May 30, 2021 in Washington, DC. (Photo by Tasos Katopodis/Getty Images) OAN NewsroomUPDATED 2:12 PM PT – Sunday, May 30, 2021 Rolling to Remember is an annual […] 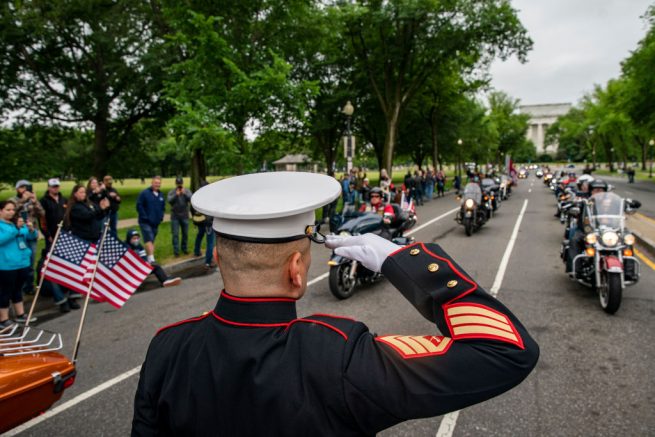