A man in a wheelchair is seen at a damaged site after an airstrike in the besieged town of Douma, Eastern Ghouta, Damascus, Syria February 9, 2018. REUTERS/Bassam Khabieh

GENEVA (Reuters) – Syria and Russian airstrikes in rebel-held areas have killed 230 civilians in the past week in some of the conflict’s worst violence that may also constitute war crimes, the top United Nations human rights official said on Saturday.

Zeid Ra’ad al-Hussein, U.N. High Commissioner for Human Rights, said his office had received reports including video footage of possible use of “toxic agents” on Feb. 4 in the rebel-held town of Saraqeb, Idlib province.

“After seven years of paralysis in the (U.N.) Security Council, the situation in Syria is crying out to be referred to the International Criminal Court, as well as for a much more concerted effort by States to bring peace,” Zeid said in a statement.

Italians march against racism after shooting spree against migrants

Sat Feb 10 , 2018
Demonstrators march during an anti-racism rally in Macerata, Italy, February 10, 2018. REUTERS/Yara Nardi February 10, 2018 By Matteo Berlenga MACERATA, Italy (Reuters) – Thousands of Italians marched against racism on Saturday in the city of Macerata where a man opened fire on African migrants a week ago, injuring six […] 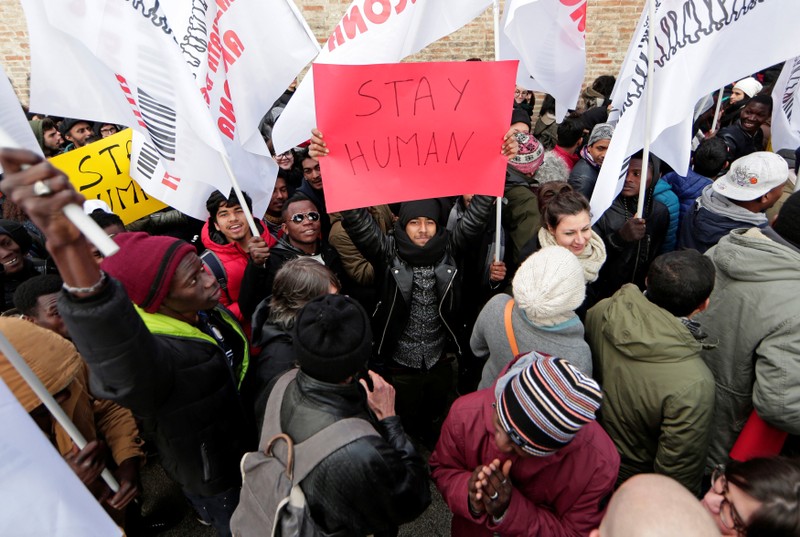