Do you have a dog? I have a sweet little three pound chocolate colored teacup poodle named Lady Godiva. Her name seems irregular to some but I had reasons to name her that.

Lady is so there is no mistake that she is a female dog. Godiva is for “Godiva Chocolate” and the fact that GOD is in my dog’s name will hopefully keep her protected from anything she faces in life.

Other people give thought to their dog’s name too.

In Florida a police dog was given the name TRUMP. A photo became a viral Facebook meme this week.

The image of a patrol car belonging to the Orange County Sheriff’s Office with a decal featuring K-9 Trump’s name has gotten more attention than anticipated. 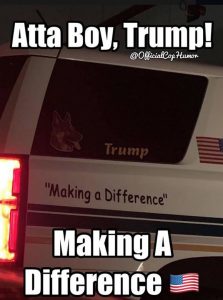 #Florida police agency considering changing policy after one of its police dogs, named Trump, was featured in a Facebook meme. #K9#K9Trump @OrangeCoSheriffhttps://t.co/uRLipstqg9

K-9 names are left to the discretion of their human partners. There is no policy that dictates how the dogs should be named. It appears that this rule could change.

The video is here:

Allies in Syria fighting as Trump declares victory over ISIS

Fri Mar 22 , 2019
Northern Syria — President Trump said Friday U.S.-backed forces have now taken 100 percent of the territory once held by ISIS in Syria. In 2014, it held nearly a third of the country and 2,000 U.S. troops eventually joined the battle. That will soon be reduced to a few hundred. […]