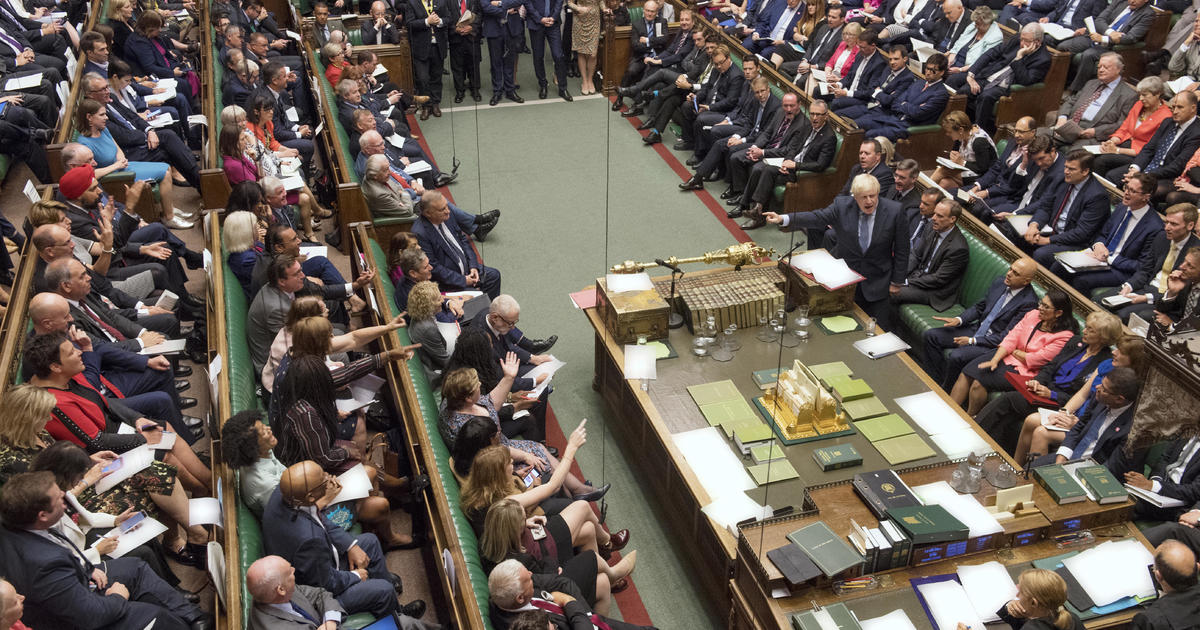 London — Britain’s exit from the European Union seemed to be heading for another delay Wednesday as lawmakers in the lower house of Parliament passed a bill to prevent the U.K. from crashing out of the bloc without a divorce agreement. The bill will now go to the upper chamber, the House of Lords. If all the talk of political rebellions, possible elections, and shutting down parliament has your head spinning, you’re not alone.

This is uncharted territory. Below are the basics of what is going on, and what could come next:

Prompting a huge outcry, Prime Minister Boris Johnson managed to schedule a shutdown of Parliament from the end of this week. He denies it was his intention, but the effect was to reduce the number of working days lawmakers have before the current October 31 Brexit deadline to try to avert a divorce from the EU without a new trade and customs agreement in place: a so-called “no-deal” Brexit.

Johnson insists he wants to strike a deal to split with the EU, but has promised to take the U.K. out of the bloc by the October 31 deadline, regardless. He says his best chance of negotiating a new deal with the European Union that a majority of Members of Parliament (MPs) can agree to is to leave the threat of walking away without one on the table.

But many MPs believe leaving the EU without a deal would spell economic disaster for Britain, and they want to do everything they can to ensure it doesn’t happen.

Late on Tuesday, a majority of them voted to seize control of Wednesday’s parliamentary agenda so they could introduce a bill which, if passed in both houses, will force Johnson to ask the EU for a three-month extension to the deadline unless Parliament approves a new withdrawal agreement or votes to allow a “no-deal” divorce by October 19.

The bill “means running up the white flag,” Johnson said in Parliament on Tuesday. “There are no circumstances in which I will ever accept anything like it.”

After the “surrender bill” passed in the House of Commons late Wednesday, Johnson laid a motion to trigger an election.

Elections in the U.K. can be called by a prime minister anytime within a five-year window, but two-thirds of MPs have to approve it for the election to go ahead. Johnson doesn’t have anything close to that kind of majority in Parliament. He would need support from the opposition, and most opposition politicians have said they won’t back an election until the prospect of a no-deal Brexit is completely off the table.

What’s the hold-up with a deal?

The draft agreement that Johnson’s predecessor, Theresa May, hashed out with EU negotiators was firmly rejected by the British Parliament on multiple occasions.

The major sticking point was a section known as the Irish “backstop,” which is aimed at keeping the land border between Ireland (an EU member) and Northern Ireland (part of the U.K.) open, regardless of what happens in future negotiations between Europe and Great Britain.

That border has remained open, virtually invisible but for signs on the road, since the 1999 Good Friday peace agreement ended the bloody, decades-long sectarian conflict known as The Troubles.

The “backstop” clause states that the entire U.K. would effectively remain within the EU customs union until a more permanent solution to cross-border movement is agreed. Hard-line “Brexiteers” refuse to accept the clause. They argue another solution might never be found, and that it would effectively leave the U.K. beholden to EU customs rules indefinitely.

European Union officials have been adamant up until now that they have not been presented with any workable alternatives to the “backstop.”

There has been a growing sense of confusion and consternation among both the public and politicians in Britain, with protests erupting around the country over the last couple of weeks.

Johnson expelled 21 MPs from the Conservative Party late Tuesday for breaking with his party line, including the grandson of Winston Churchill, Nicholas Soames.

“I’m very, truly sad that it should end this way,” Soames said in a tearful speech. “It is my most fervent hope that this house will rediscover the spirit of compromise, humility, and understanding that will enable us finally to push ahead with the vital work in the interest of the whole country.”

“One day, the pain will pass,” Bates said. “We’ll wake up in the morning, the sun will be shining and it will all be over. But not yet.”