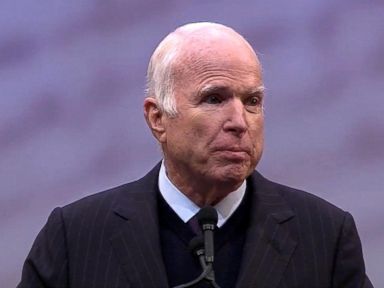 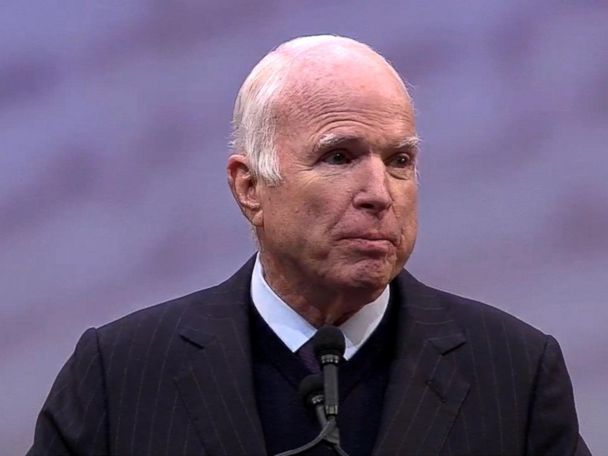 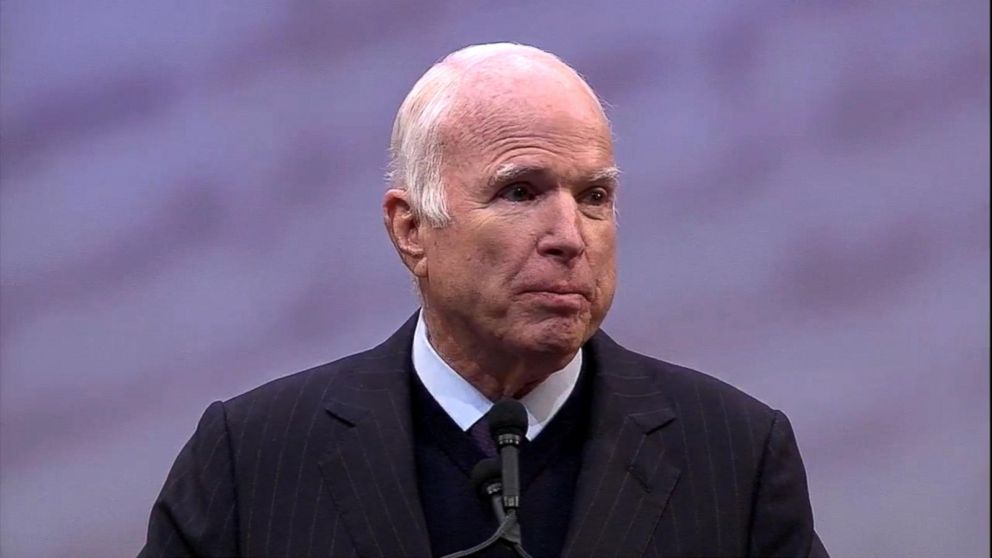 Transcript for Trump warns McCain: ‘I fight back’

The president issued a warning to senator John McCain after McCain said the quote half-baked spurious nationalism backed by trump is unpatriotic. You heard what he said yesterday, senator McCain. Yeah, well, I hear it. And people have to be careful because at some point I fight back. I’m very, very, very nice but at some point I fight back and it won’t be pretty. More from Meghan McCain, the newest co-host on “The view” and let me begin with you. You heard what the president said about your dad. Where does this go next? You know, I think the fighting between them just comes from the fact that they have deep ideological differences of perspective on how America is run. How the Republican party should work together. But on a personal note I don’t know about you but I’m exhausted with the in-fighting within the Republican party. I’m exhausted with the attacks on my father. I don’t know if you guys have heard but my father is fighting glioblastoma right now and there’s nothing that could possibly happen or threaten me and my family that could be more painful than what we are going through and whatever threats are being levied I’m telling you, right now there’s nothing — there’s nothing that could possibly happen that could possibly be more complicated. I just have high hopes that someday president trump and the rest of the Republican party can find some common ground together where if you have any kind of difference of opinion on the future of the country or the party, you’re not just automatically going to be threatened in return. Yeah, and the questions are trying to come to some agreement on big issues like health care and taxes even as these personal attacks go on. Uh-huh, and, again, I have high hopes that it will happen. I’m a little confused about the bipartisan agreement with Democrats regarding the health care bill because when you have people like Rand Paul and Mike Lee who are more on the libertarian side of the party who really just want repeal and don’t want any replacement, that was part of the problem with the original bill. So I don’t understand if you’re a s’morer of president trump and you are part of his base, he ran on repealing and replacing Obamacare and now for them will a compromise with Democrats be satisfactory? I don’t see how it’s going to be possible. It doesn’t seem like that all make sure dad is calling for compromise — He is. Again, he is and my father obviously was the infamous down vote but I just don’t know if it will be satisfactory to his base. Let me bring in Matt dowd on this. Matt, it does come, the president is trying to get Republicans rallied behind tax reform, trying to get them rallied behind something on health care. Yet these self-inflicted wounds continue starting with how he talked about the fallen families. Well, every single time that you think Donald Trump has turned a corner and he’s going to do something that is going to be positive for the country and politically positive for himself, he does another thing that reduces his approval ratings and drops him down. Keep in mind, George, the only time that Donald Trump has risen in his approval ratings in his entire presidency was when he had cut that deal with Nancy Pelosi and chuck Schumer on the debt ceiling and so if he can reach an agreement on DACA or reach an agreement on taxes or health care reform then I think his numbers go up. The problem he has as Meghan alluded to, the Republicans are no way unified on what he should do. The Democrats are pretty solid on this. But the president has to figure out a way to work with congress which he hasn’t done since January 20th. And the one place Republicans, Meghan, are unified, tax reform. Can they get it through. If we don’t get some kind of win coming forward into midterms it will be very dangerous for people up to re-election. I certainly hope so but such a fractured party, there’s so much in-fighting I wouldn’t get too far ahead of myself. All right. Would you give your father our best? Thank you. He is doing good. I mean he’s all things considered and we are so blessed and so happy to have the health care team at nih. We’re so lucky. I just want to bring more awareness to glioblastoma and brain cancer. Part of the reason I’m working at “The view.” I hope you all come on at some point. He’s doing well and appreciate the thoughts and prayers everyone has given my family. It is deeply meaningful. We saw your father and Joe Biden together. I don’t agree with him on much but he’s a wonderful man. One thing you do agree on, you fit right in on “The view.” I was pretty nervous. Thank you very much. We appreciate you coming here.

Wed Oct 18 , 2017
President Donald Trump today denied telling the widow of a fallen U.S. soldier “he knew what he signed up for” in a phone call he made Tuesday, contradicting a Florida congresswoman who said she was with the woman at the time. Rep. Frederica Wilson said she was with Myeshia Johnson […]