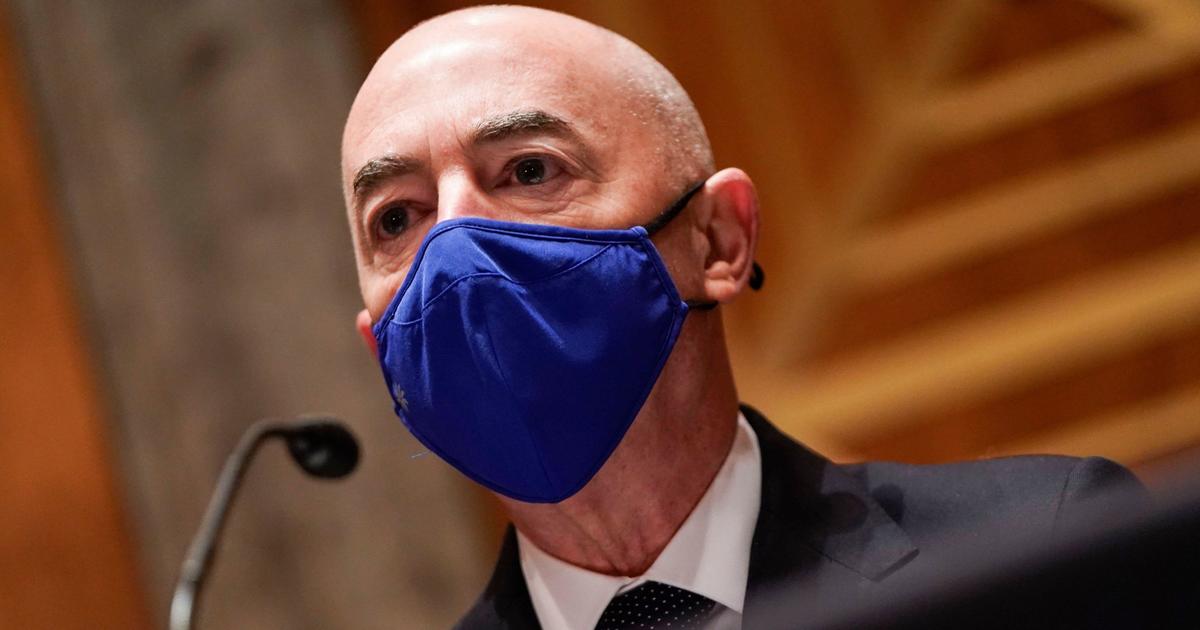 Washington — Homeland Security Secretary Alejandro Mayorkas will face tough lines of questioning from lawmakers when he appears before Congress on Wednesday for the first time since being confirmed as the head of overseeing a sprawling department charged with managing some of the nation’s most urgent challenges.

Chief among them is a historic number of migrants who are illegally crossing into the United States, creating an overwhelming need for more humanitarian assistance along the Texas border with Mexico, where more than 13,000 unaccompanied migrant children are now in U.S. custody, sources tell CBS News.

The U.S. is on pace to stop more migrants encountered along the border than at any point in the last 20 years, Mayorkas said in a statement released Tuesday, repeatedly calling the situation “difficult.”

How to watch Mayorkas’ testimony before Congress

More than 3,000 unaccompanied minors are being held by border officials beyond the legal limit of 72 hours, according to government records reviewed by CBS News, with children spending an average of 120 hours in Border Patrol facilities due to a shortage in space to house them.

“The Border Patrol facilities have become crowded with children and the 72-hour timeframe for the transfer of children from the Border Patrol to [Health and Human Services] is not always met. HHS has not had the capacity to intake the number of unaccompanied children we have been encountering,” Mayorkas said.

The Biden administration has continued the Trump-era policy of using public health law to quickly expel most single migrant adults and families from the southern border, but shielded unaccompanied children from the expulsions.

Lawmakers, including some from the president’s own party, have grown frustrated by the logistical challenges along the southwest border, as officials race to stand up temporary housing for unaccompanied migrant children.

House GOP Leader Kevin McCarthy led a delegation of Republican lawmakers to the U.S.-Mexico border on Monday, slamming President Biden for what McCarthy called the “Biden border crisis” during the trip to Texas.

For his part, Mr. Biden said during an interview with ABC News Tuesday that his administration could have enough space to shelter unaccompanied minors stuck in border facilities by next month. But his message to migrants and those considering the treacherous journey to the U.S. border was stark: “I can say quite clearly: Don’t come over,” Mr. Biden said. “Don’t leave your town or city or community,” the president added.

The U.S. government plans to use a downtown convention center in Dallas, a former camp for oil field workers in Midland, Texas, and a California NASA facility to help house unaccompanied migrant children.

Mr. Mayorkas will appear before the House Homeland Security Committee, as the House prepares to vote this week on several immigration measures that would create a path to citizenship for millions of undocumented immigrants in the United States.

In addition to the escalating crisis on the Southwest border, the DHS secretary is also expected to face questions on a series of intersecting challenges facing his department: coronavirus vaccine distribution spearheaded by the Federal Emergency Management Agency (FEMA) under the agency’s direction, the looming threat of domestic terrorism in the wake of the January 6 Capitol attack and back-to-back cyberattacks, including a massive breach of Microsoft Exchange server. U.S. officials have refrained from pinpointing the attacker in the ongoing cyberespionage campaign, though the company identified a Chinese-based group known as “Hafnium” as the primary actor behind initial attacks.

Last week, the DHS chief called domestic violent extremism “the greatest threat we now face in the homeland” in an interview with Univision.

Melissa Smislova, acting undersecretary for the DHS Office of Intelligence and Analysis, told lawmakers earlier this month that the agency wrote 15 advisories warning of the mounting extremist threat throughout 2020, including an August 2020 report indicating that political campaigns could be targeted during the divisive presidential election period.

But the intelligence chief testified that DHS did not have any specific intelligence outlining “an attack on the Capitol to occur on January 6,” despite intentions broadcast by extremist groups on social media. “We did not issue a separate report,” Smislova said of the insurrection in her appearance before the Senate. “In hindsight, we probably should have.”

Mayorkas’ testimony also comes as the Biden administration works to accelerate the pace of COVID-19 vaccinations, particularly among marginalized and minority communities disproportionately impacted by the pandemic. Acting Director of FEMA Robert Fenton was grilled on the agency’s efforts to equitably distribute the vaccine to at-risk zip codes on Tuesday, as racial disparities in vaccine access persist, especially among Black and Latino Americans.

And while the DHS Secretary will take center stage Wednesday, the Biden administration hopes the Senate will confirm Xavier Becerra as secretary of Health and Human Services (HHS) and begin to fill out key staff to spearhead efforts on the U.S.-Mexico border. HHS oversees the sheltering of minors once they are discharged from U.S. Customs and Border Protection (CBP).

Mr. Mayorkas is the sole Senate confirmed leader at the helm of DHS. All departments under the agency’s charge – including Immigration and Customs Enforcement, Customs and Border Protection and U.S. Citizenship and Immigration Services – are currently led by career officials operating in an acting capacity.

Camilo Montoya-Galvez contributed to this report.

House to vote to reauthorize Violence Against Women Act

Wed Mar 17 , 2021
Washington — The House will vote Wednesday on reauthorizing the Violence Against Women Act (VAWA), the landmark 1994 law that strengthened domestic violence protections for women. The measure, which expired two years ago, is expected to pass in the House, but may hit a roadblock in the evenly divided Senate. […]