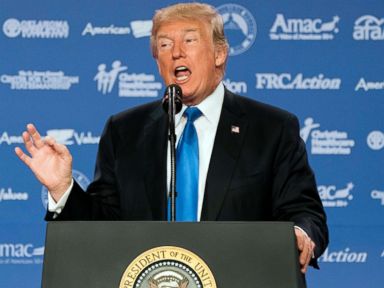 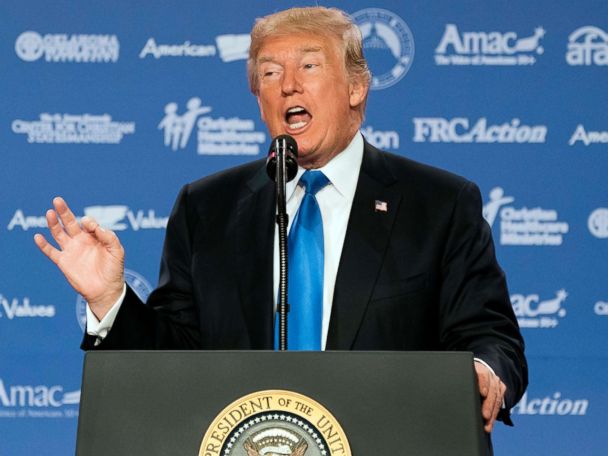 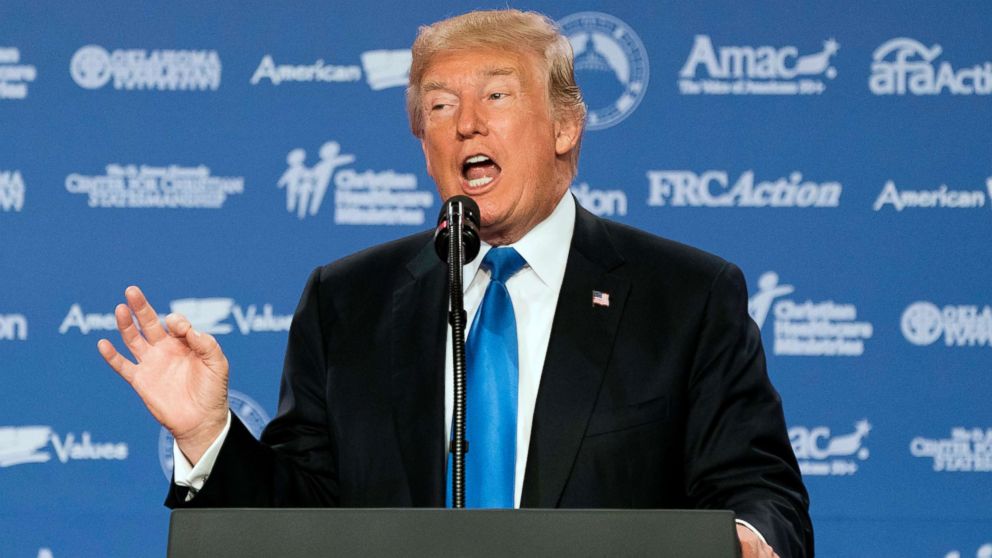 President Donald Trump fervently advocated for religious liberty in a speech before a group of conservative Christian voters Friday, citing the protection of religious freedom guaranteed by the First Amendment, even as his critics pointed to that same amendment earlier in the week as he suggested blocking freedom of the press.

Trump’s remarks came at the Values Voter Summit in Washington, D.C. where he became the first sitting president to address the event hosted by the Family Research Council — a religious non-profit lobbying organization that promotes what it describes as “traditional values”. As was the case in his two prior appearances at the summit as a presidential candidate, Trump focused much of his energy on the theme of protecting freedom of religion, and argued he has followed through on his campaign promises..

Earlier in the address, Trump commented that the nation’s Founding Fathers “invoked our creator four times in the Declaration of Independence,” and he pointed to the Bill of Rights as the guiding principle on the issue.

“Religious liberty is enshrined in the very first amendment of the Bill of Rights, and we all pledge allegiance to — very, very beautifully — one nation under God,” Trump said. “This is America’s heritage, a country that never forgets that we are all, all, every one of us, made by the same God in heaven.”

Only individual television stations — some of which are owned at the network level — have licenses that could potentially be disputed.

As evidence of his efforts to further the interests of the religious community, Trump discussed his reinstatement of the so-called “Mexico City policy,” that prevents foreign organizations from receiving U.S. federal government funding for health-related programs if they perform or promote abortions. First instituted by President Ronald Reagan in 1984, the policy has been revoked twice and reinstated twice as Democrats and Republicans have traded the White House back-and-forth since the early 1990s.

The president’s overtures to Judeo-Christian Americans has not waned in the aftermath of his election victory last year. In a moment that received widespread attention in June, Trump welcomed religious leaders to the Oval Office where he was photographed praying with the group.

Friday’s speech further doubled down on a prior promise that Trump has made at the Values Voter Summit: to encourage the public to use the phrase “Merry Christmas” during the holiday season.

“We’re getting near that beautiful Christmas season that people don’t talk about any more,” the president said. “They don’t use the word ‘Christmas’ because it is not politically correct. You go to department stores and they’ll say, ‘happy New Year,’ and they’ll say other things, and it’ll be red, they’ll have it painted, but they don’t say– well guess what, we’re saying ‘merry Christmas’ again.”