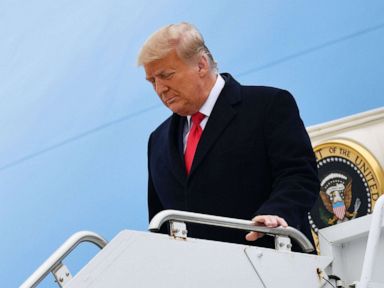 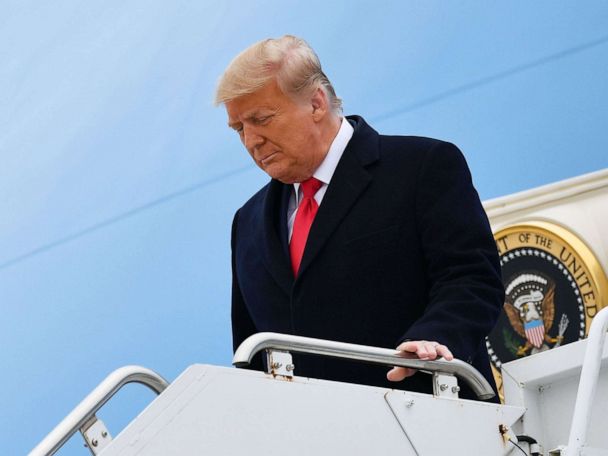 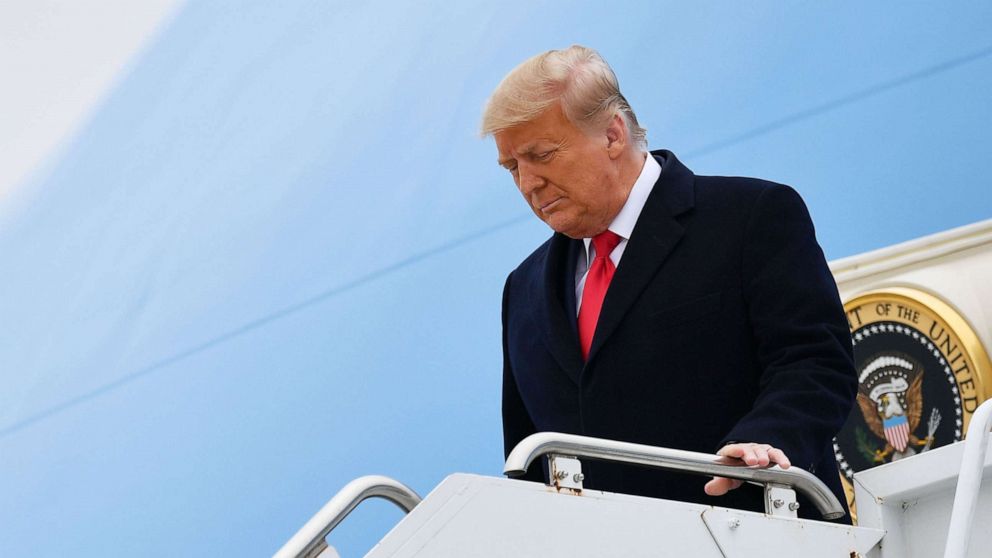 In an angry conversation on his final day as president, Donald Trump told the chairwoman of the Republican National Committee he was leaving the GOP and creating his own political party — and that he didn’t care if the move would destroy the Republican Party, according to a new book by ABC News Chief Washington Correspondent Jonathan Karl.

Trump only backed down when Republican leaders threatened to take actions that would have cost Trump millions of dollars, Karl writes his upcoming book, “Betrayal: The Final Act of the Trump Show.”

The book gives a detailed account of Trump’s stated intention to reject the party that elected him president and the aggressive actions taken by party leaders to force him to back down.

The standoff started on Jan. 20, just after Trump boarded Air Force One for his last flight as president.

“[RNC Chairwoman Ronna McDaniel] called to wish him farewell. It was a very un-pleasant conversation,” Karl writes in “Betrayal,” set to be released on Nov. 16.

“Donald Trump was in no mood for small talk or nostalgic goodbyes,” Karl writes. “He got right to the point. He told her he was leaving the Republican Party and would be creating his own political party. The president’s son, Donald Trump Jr., was also on the phone. The younger Trump had been relentlessly denigrating the RNC for being insufficiently loyal to Trump. In fact, at the January 6 rally before the Capitol Riot, the younger Trump all but declared that the old Republican Party didn’t exist anymore.”

With just hours left in his presidency, Trump was telling the Republican Party chairwoman that he was leaving the party entirely. The description of this conversation and the discussions that followed come from two sources with direct knowledge of these events.

“You cannot do that,” McDaniel told Trump. “If you do, we will lose forever.”

“Exactly. You lose forever without me,” Trump responded. “I don’t care.”

Trump’s attitude was that if he had lost, he wanted everybody around him to lose as well, Karl writes. According to a source who witnessed the conversation, Trump was talking as if he viewed the destruction of the Republican Party as a punishment to those party leaders who had betrayed him — including those few who voted to impeach him and the much larger group he believed didn’t fight hard enough to overturn the election in his favor.

“This is what Republicans deserve for not sticking up for me,” Trump told McDaniel, according to the book.

In response, McDaniel tried to convince Trump that creating his own party wouldn’t just destroy the Republican Party, it would also destroy him.

“[Trump] wasn’t simply floating an idea,” Karl writes in the book. “He was putting the party chairwoman on notice that he had decided to start his own party. It was a done deal. He had made up his mind. ‘He was very adamant that he was going to do it,’ a source who heard the president’s comments later told me.”

Following the tense conversion, McDaniel informed RNC leadership about Trump’s plans, spurring a tense standoff between Trump and his own party over the course of the next four days.

While Trump, “morose in defeat and eager for revenge, plotted the destruction of the Republican Party … the RNC played hardball,” according to the book.

“We told them there were a lot of things they still depended on the RNC for, and that if this were to move forward, all of it would go away,” an RNC official told Karl.

According to the book, “McDaniel and her leadership team made it clear that if Trump left, the party would immediately stop paying legal bills incurred during post-election challenges.”

“But, more significant, the RNC threatened to render Trump’s most valuable political asset worthless,” Karl writes, referring to “the campaign’s list of the email addresses of forty million Trump supporters.”

“It’s a list Trump had used to generate money by renting it to candidates at a steep cost,” says the book. “The list generated so much money that party officials estimated that it was worth about $100 million.”

Five days after revealing plans that could have destroyed his own political party on that last flight aboard Air Force One, Karl writes, Trump backed down, saying he would remain a Republican after all.

Asked this week to respond to Karl’s book, both Trump and McDaniel denied the story.

“This is false, I have never threatened President Trump with anything,” McDaniel told ABC News. “He and I have a great relationship. We have worked tirelessly together to elect Republicans up and down the ballot, and will continue to do so.”

Trump, responding to the story, said, “ABC Non News and 3rd rate reporter Jonathan Karl have been writing fake news about me from the beginning of my political career. Just look at what has now been revealed about the Russia, Russia, Russia hoax. It was a made up and totally fabricated scam and the lamestream media knew it. It just never ends!”

Trump has long denounced news reports that he had considered starting his own party as “fake news.” In Karl’s final interview with the former president for his book, Trump claimed to not recall his conversation with McDaniel on Jan. 20, saying, “a lot of people suggested a third party, many people” — but that he himself had never even thought about leaving the GOP.

“You mean I was going to form another party or something?” Trump asked Karl incredulously. “Oh, that is bulls**t. It never happened.”

Mon Nov 8 , 2021
An 83-year-old from Alabama started walking when he retired more than a quarter-century ago – and never stopped. M.J. “Sunny” Eberhart strode into the record books Sunday as the oldest hiker to complete the Appalachian Trail. Eberhart, known by the trail name Nimblewill Nomad, acknowledged that despite having tens of […]