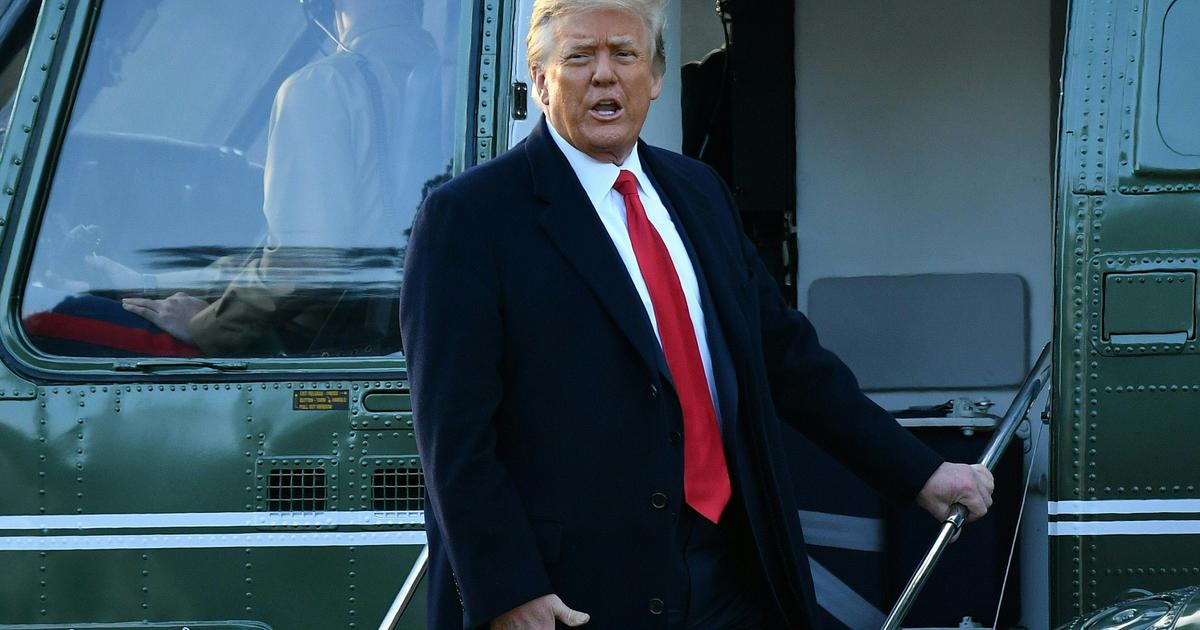 Washington — Former President Donald Trump’s attorneys lambasted the impeachment proceedings brought by the Democratic-led House in a new filing the day before his trial, in which they accused Democrats of attempting to “silence a political opponent” and urged the Senate to dismiss the article of impeachment against Mr. Trump.

“In this country, the Constitution — not a political party and not politicians — reigns supreme. But through this latest article of impeachment now before the Senate, Democrat politicians seek to carve out a mechanism by which they can silence a political opponent and a minority party,” Bruce Castor, David Schoen and Michael T. van der Veen, who are representing Mr. Trump in his impeachment trial, wrote in their 78-page trial memorandum filed Monday. “The Senate must summarily reject this brazen political act.”

The president’s lawyers said the article of impeachment approved by the House last month, which charges Mr. Trump with incitement of insurrection, “ignores the very Constitution from which its power comes.”

“In bringing this impeachment at all, the members of the House leadership have debased the grave power of impeachment and disdained the solemn responsibility that this awesome power entails,” they wrote.

Mr. Trump’s impeachment trial is poised to kick off Tuesday, though it’s unclear how long the proceedings will last. The former president was impeached by the House in a bipartisan vote for his role in the January 6 assault on the U.S. Capitol, which left five dead after a crowd of pro-Trump rioters stormed the building while Congress was counting states’ electoral votes.

The nine House impeachment managers tasked with prosecuting the case against the former president argue Mr. Trump is “singularly responsible” for the attack on the Capitol, as he repeatedly made false claims about overturning the outcome of the presidential election and told his supporters during a rally the morning of January 6 to “fight like hell.” They also claim the president did not act swiftly enough to quell the violence.

Bu Mr. Trump’s legal team has argued the trial is unconstitutional, saying the Senate lacks the authority to try a former president. They also argue the House’s core claim — that the former president incited the insurrection — is undercut by the fact the FBI confirmed the breach at the Capitol was planned in advance.

“The article of impeachment presented by the House is unconstitutional for a variety of reasons, any of which alone would be grounds for immediate dismissal,” they said. “Taken together, they demonstrate conclusively that indulging House Democrats hunger for this political theater is a danger to our republic democracy and the rights that we hold dear.”

The Constitution does not address whether a president can be tried when they are out of office, though Republicans point to Chief Justice John Roberts’ absence from the forthcoming proceedings as evidence the trial is unconstitutional. Last month, GOP Senator Rand Paul of Kentucky challenged the constitutionality of an impeachment trial against a former president, though his motion was voted down by the Senate. Just five Republicans joined Democrats in opposing Paul’s objection, a signal that Democrats are unlikely to garner the 17 Republican votes needed to convict Mr. Trump.

In their filing Monday, Mr. Trump’s lawyers also rejected Democrats’ claims that he reveled in the display of support from the rioters and did not do enough to protect the Capitol and lawmakers inside.

“The fact is there are complex procedural elements involved in quelling a riot at the Capitol and on the mall — DC police, Capitol Police, National Guard, etc.,” his legal team said. “There was a flurry of activity inside the White House working to mobilize assets. There is no legitimate proof, nor can there ever be, that President Trump was ‘delighted’ by the events at the Capitol. He, like the rest of the country, was horrified at the violence.”

Mr. Trump’s lawyers accused House Democrats of failing to conduct an investigation into the events of January 6 and claimed the House “abdicated that responsibility to the media.” The president, they argued, was not afforded any due process as the House swiftly drafted and approved the single article of impeachment against him.

“This was only ever a selfish attempt by Democratic leadership in the House to prey upon the feelings of horror and confusion that fell upon all Americans across the entire political spectrum upon seeing the destruction at the Capitol on January 6 by a few hundred people,” his legal team wrote. “Instead of acting to heal the nation, or at the very least focusing on prosecuting the lawbreakers who stormed the Capitol, the speaker of the House and her allies have tried to callously harness the chaos of the moment for their own political gain.”

The House impeachment managers responded to the Trump lawyers’ briefing in a filing of their own later Monday, denying “each and every allegation” that “denies the acts, knowledge, intent, or wrongful conduct charged against President Trump.”

“As charged in the Article of Impeachment, President Trump violated his Oath of Office and betrayed the American people,” the Democrats wrote in a 5-page memo. “His incitement of insurrection against the United States government — which disrupted the peaceful transfer of power — is the most grievous constitutional crime ever committed by a President.”

While the Senate will convene as a court of impeachment Tuesday, the rules of the trial have not yet been formalized. Senate Majority Leader Chuck Schumer and Minority Leader Mitch McConnell are, however, nearing a deal on a trial resolution laying out the proceedings’ parameters, according to a person familiar with the talks.

The resolution would allow up to four hours of debate on the issue of the trial’s constitutionality Tuesday, followed by a vote on that question. Presentations from the House impeachment managers and Mr. Trump’s lawyers would begin Wednesday, with each allotted up to 16 hours. If the managers request witnesses, then the Senate will debate and vote on whether to allow the testimony. At the request of Mr. Trump’s lawyers, there will be no trial proceedings during the Sabbath, between Friday after 5 p.m. or on Saturday, and the trial would reconvene Sunday afternoon, according to the person familiar.

Mon Feb 8 , 2021
U.S. Immigration and Customs Enforcement officers will reportedly be given new guidance that will lead to fewer arrests and deportations. The Washington Post reports the policy change would mean ICE agents will no longer seek deportations for immigrants convicted of drunk driving and assault. CBS News immigration reporter Camilo Montoya-Galvez […]