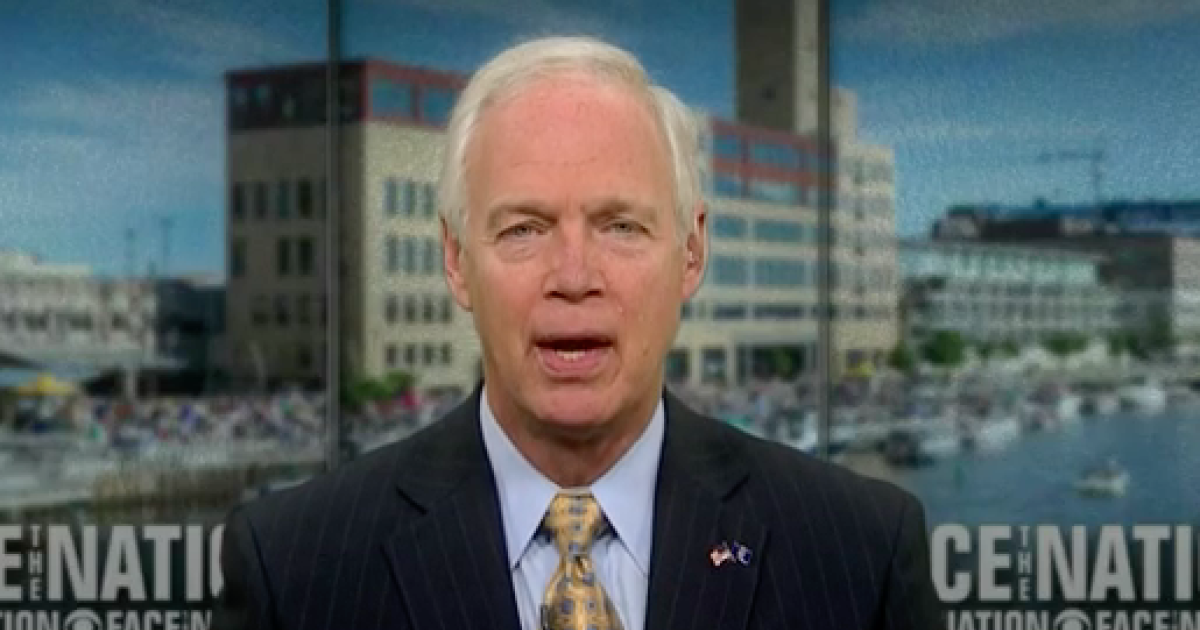 The following is a transcript of the interview with Republican Sen. Ron Johnson of Wisconsin that aired Sunday, May 26, 2019, on “Face the Nation.”

MARGARET BRENNAN: We’d like to now bring in Wisconsin Senator Ron Johnson the chairman of the Homeland Security Committee and he joins us this morning from Green Bay. Senator, I know you just came back from the border where you were yesterday in that area where we saw that migrant death just this week due to an outbreak of the flu. I know dozens have been quarantined as a result. Are you concerned that there will be more deaths like this because of overcrowding?

SEN. JOHNSON: Good morning, Margaret. Well first let me say that the men and women of our Border Patrol and other volunteers from the federal government are doing a heroic effort trying to deal with this humanitarian crisis. Yeah, we’re all concerned. They- they had an outbreak of flu. They believed it might have been H1N1, highly dangerous, but the processing centers are back open but they’re grossly overcrowded because of the unbelievable situation on the border, the out of control nature of it. Just- just the last three weeks, on average about twenty three thousand women- women, children, men are coming over across the border illegally as family units. There’s unaccompanied children. Twenty two to twenty three thousand a week. We’re- we’re almost eight months into this fiscal year and we’ve got- we’re up to about 400,000 in total. And if it continues at this pace in one year we’ll have about 800,000 unaccompanied children people crossing the border illegally as a family unit. 800,000. So this is overwhelming our system and we have to stop it. We- we have to change our laws to stop rewarding, incentivizing people across our border illegally.

MARGARET BRENNAN: But, I- senator I hear your concern here and the assistant secretary raised it last week on this program. And yet Congress went home for recess without allocating any money to this border crisis. And in fact Republicans had agreed to strip it out of the disaster relief bill. How is that possible?

SEN. JOHNSON: Well first of all I’ve been advocating to make sure that the Department of Homeland Security and HHS get the 4.5 billion dollar emergency spending request, they need that money they need it desperately. So hopefully when we get back in- in session after the Memorial Day holiday that funding will be quickly appropriated so that those individuals that are doing such a- you know- just- they’re doing the Lord’s work down there together with people like Sister Norma working with the Catholic Charities other people trying to respond to this humanitarian crisis.

SEN. JOHNSON But again, we are allowing this to happen. It is our broken laws that are sustaining this wicked business model. These- these human traffickers–

SEN. JOHNSON: We have to change our laws.

MARGARET BRENNAN: Let’s finish this conversation on the other side of this break stay with us.

MARGARET BRENNAN: Welcome back to FACE THE NATION. We continue our conversation now with Wisconsin Republican Senator Ron Johnson. Senator, was it a mistake for the president to say this week that he won’t work with Democrats until they stop the investigations?

SEN. JOHNSON: Well my guess is he’s just stating reality. It’s going to be pretty hard to pass legislation when that’s all the House is really doing. I- I- I warned voters ahead of the 2018 election that if you put Democrats in front of- in charge of the House, all you’re going to be talking about is investigations, talk of impeachment and it won’t be about governing and creating greater prosperity for Americans, and that’s kind of what we’re seeing play out here. It- it’s very unfortunate- particularly, when you take a look at things like an emergency spending bill that- that we need for some of these disasters, that we need for you know, getting the situation at the- at the border under control. When you talk about the fact we have to fix our horribly broken immigration system so we can stop or reduce this flow. You know, I heard Beto O’Rourke- O’Rourke saying, “All we have to is assign a case officer to every one of these families.” Well that’d be about 400,000 case officers or people that could handle 400,000 families, this year alone. We don’t have that kind of personnel. So the goal of our policy should be to reduce that flow. And in the House you just talking about impeachment investigations, it’s very unfortunate.

MARGARET BRENNAN: Well it- that kind of brings us back to the point of why this impasse could be so damaging. I want to ask you, though, about something the Trump administration decided to do, you sit on the Senate Foreign Relations Committee. Secretary Pompeo decided to essentially bypass the committee and go ahead with these sales of weapons to Saudi Arabia and other countries. Do you- does this trouble you that this didn’t go through the regular pro- process here?

SEN. JOHNSON: This just speaks to the ongoing tension between Congress’s war authorizing powers and the president’s powers, constitutional powers when it comes to foreign policy. You know, Congress is pretty dysfunctional, it doesn’t act very quickly. Sometimes the administration- which is why the founders very intelligently vested so much power in the presidency to act quickly in reaction to growing threats. And I agree with Congressman Hurd, the- the intelligence was- was certainly from my standpoint, concerning and I think that the administration has handled this pre- pretty well. They’re doing everything they can to deter further aggression by Iran. And let’s face it, Iran is a lying actor throughout the Middle East–

MARGARET BRENNAN: But they bypassed you- you and your committee. And that doesn’t trouble you?

SEN. JOHNSON: I- I wouldn’t- no, no listen I think they’ve notified the- the chairman and the ranking member of this.

SEN. JOHNSON: Congress often- often operates way too slowly to react to situations we need react to to prevent war. And that is what this administration I think has done. They’ve deterred more malign actions on the part of Iran. I support the administration.

MARGARET BRENNAN: Quickly, I want to ask you about the president’s tweet here. He’s in Japan and he, talking about war, said that Kim Jong Un’s testing of these short range missiles doesn’t bother him even though his national security advisor said it violates U.N. resolutions, it alienates the allies- allies like Japan who could be hit by some of these short range missiles, and then he praised Kim for insulting Joe Biden. Is this appropriate?

SEN. JOHNSON: Well certainly North Korea is- is one of the real problems that we’re having to deal with and it certainly concerns me when they’re doing any kind of testing. The fact that they haven’t been testing, you know, nuclear devices or- or longer range missiles is a good thing. This is a very difficult issue. Administrations on- on both sides of the political spectrum- have tried to deal with this. President Trump trying to do it in a somewhat- to deal with it in somewhat unorthodox style. I hope he succeeds.

MARGARET BRENNAN: All right. Senator Johnson thank you for joining us.