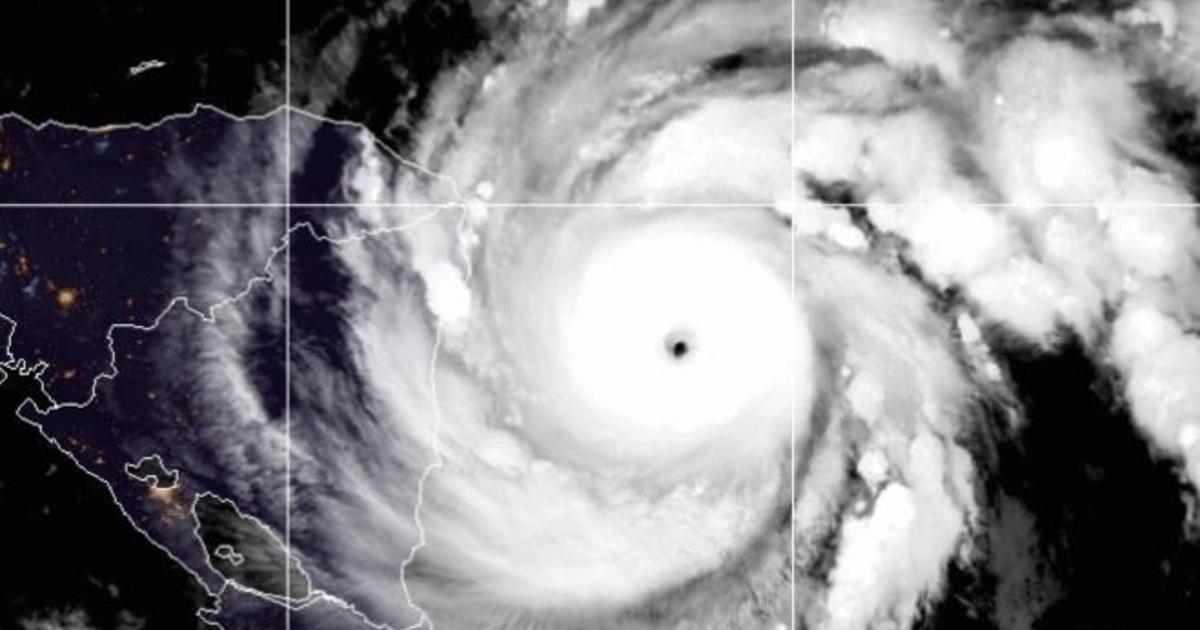 Like so many other aspects of 2020, the Atlantic hurricane season hurled one shocking event after another, pushing the limits of what meteorologists thought was possible. Even as longtime records were falling and meteorologists felt as though they’d seen it all, 2020 had more tricks up its sleeve.

From the total number of storms to the rapid intensification and multiple landfalls, the records set in 2020 will likely stand for quite some time. What follows is a recap of the season’s most astonishing milestones with an explanation of the factors that led to the events in this unprecedented season. Some of those factors are natural occurrences, while some are the result of human impact on the climate.

Most storms in a season

So far, the 2020 Atlantic hurricane season has spawned 30 tropical storms, forcing forecasters to dig deep into the Greek alphabet for names, having run out of the assigned names in the middle of September. This breaks the former record set in 2005 of 28 named storms. A typical season only produces 12 named storms, so 2020 has already seen two and a half times more than average.

And there’s still time for more storms. Hurricane season officially ends November 30, but  systems can and do form in December. So we’re likely to add another couple of storms to the season total before the year is out.

From the beginning there was unanimous agreement among seasonal forecasters this past spring that 2020 would be an active season, with leading climate scientist Dr. Michael Mann of Penn State publishing the most aggressive forecast, predicting up to 24 storms. What seemed like a bold prediction at the time was not nearly bold enough.

The unanimous expectations last spring illustrate that all of the variables that portend an active season appeared to be emerging months ahead of time. In fact, they not only emerged, but overlapped with one another. Everything just came together.

North Atlantic sea surface temperatures were, and continue to be, far above normal in the entire basin, providing high-octane fuel to developing storms. Also, the West African monsoon, which ejects tropical disturbances into the far eastern Atlantic, some of which become hurricanes, was exceptionally active this summer.

In the main development region of the Tropical Atlantic, surface pressures are among the lowest in the historical record; low pressure equates to storminess. Lastly, there was an absence of El Niño in the Tropical Pacific. It is a well established fact that El Niño events tend to kill Atlantic hurricanes because of the strong upper-level winds (wind shear) they produce. This year El Niño’s opposite developed — La Niña — yielding a calm environment with less wind shear, which helped nurture developing storms.

Then there’s the elephant in the room: human-caused climate change.

“My colleagues and I feel that the jury is very much out on the topic of global tropical cyclone frequency,” said Dr. Kerry Emanuel from MIT, a leading researcher on how climate change affects hurricanes. While this Atlantic season was extreme, he points out that what we see in the Atlantic Basin is not representative of the rest of the globe. “Only about 12 percent of the world’s tropical cyclones occur in the Atlantic, and globally it has not been a very exceptional year.”

Mann agrees, but leans towards what he feels is the more compelling research he’s seen, which points to more active seasons due to warming in the Atlantic. While some studies have found the opposite — suggesting a warming climate may lead to a decrease in storm numbers — Mann believes they used models that are insufficient to resolve the full spectrum of storms, which may have led to unrealistic results.

For tropical storms to form, sea surface temperatures need to reach about 80 degrees Fahrenheit. It would stand to reason that since global warming has pushed sea surface temperatures up by 2 degrees in the Tropical Atlantic, then that threshold would be reached more often, in more geographical locations and at both earlier and later points in the season, breeding more spin-ups.

Most storms to rapidly strengthen

While the first half of the 2020 season included incessant storms, they were mainly weak. That changed during peak season, August through October, and especially this autumn, no doubt owing partially to the development of the Pacific La Niña and the fact that the storms developed in the Caribbean — as they typically do during the fall — where some of the hottest waters in this hemisphere reside.

Six of the last seven systems experienced rapid intensification — defined as an increase in winds of 35 mph in 24 hours. This would be unusual at any time of the year, but the fact that these were all Greek alphabet systems, having occurred so late in the season, makes it all the more remarkable.

In total, 10 systems met the criteria for rapid intensification in 2020, tying a record established in the active 1995 season.

Even more impressive is that a record four systems “rapidly deepened” in 2020, meaning the pressure dropped more than 40 millibars in 24 hours. The two fastest pressure drops came at the tail-end of the season in November, when activity usually wanes — Hurricane Eta followed by Hurricane Iota.

Simply put, this is unprecedented. But if you dig into the data the reason is clear. The western Caribbean is already the home to the highest ocean heat content in this part of the world. But climate change is quickly boosting that heat past thresholds which were rarely reached in the past. The warmer the water, the stronger a storm can get.

The trend is clear in the red line below, showing the quick upward trend in the number of late-season days where sea surface temperatures exceed 83 degrees Fahrenheit.

This is also supported by science. In Emanuel’s 2017 paper, he finds that a storm intensifying 70 mph in the 24 hours before landfall — a feat almost accomplished by Iota — used to occur only once per century as of the late 1900s, but by later this century it will happen once every 5 to 10 years. And this 2018 paper finds that rapid intensification has increased by 4.4 mph per decade since the 1980s, meaning if a hurricane increased its winds by 40 mph per day in 1980, then it would be likely to intensify by 60 mph per day now.

Until mid-November, one check-box left unchecked this season was a Category 5 hurricane. That changed when Hurricane Iota attained winds of 160 mph. It is the most intense storm on record that late in an Atlantic hurricane season.

In each of the last five hurricane seasons we have seen at least one Category 5 hurricane — seven of them in total. This is a significant feat considering that in the last 170 years, the National Hurricane Center estimates there have only been 37 Category 5 storms. This means the chance of any given year yielding a Category 5, historically, is only about 20%.

It’s not coincidence, it’s climate change. In the past 120 years the Tropical Atlantic has warmed 2 degrees Fahrenheit. Theoretically, for every 2-degree Fahrenheit increase in ocean warming, a storm can gain almost 20 mph in peak wind speed.

The latest research supports this trend in stronger storms. In a paper published earlier this year, NOAA’s Dr. James Kossin found major hurricanes (Category 3, 4 and 5) are indeed increasing. Kossin told CBS News, “Globally, there’s about a 25% greater chance now that a hurricane will be at major hurricane intensity than four decades ago. In the Atlantic there’s about twice the chance.”

This matters because the power and corresponding damage potential of a hurricane increases exponentially as the winds increase. In fact, 85% of the damage from all hurricanes is caused by the major hurricanes. So, if you have stronger hurricanes you are likely to have exponentially more damage.

So far this season there have been 12 U.S. landfalls, shattering the old record of nine set in 2016. In what was a relentless season for people living near the Gulf of Mexico, nine of this year’s landfalls happened along the U.S. Gulf Coast and five of them occurred in Louisiana.

And in what may be the most freakish of occurrences, dual hurricane landfalls occurred just miles from each other on three occasions: Laura and Delta in Louisiana, Delta and Zeta in Mexico’s Yucatan, and Eta and Iota in Nicaragua.

While 2020 overperformed in nearly every category, there is one surprising statistic which was not all that impressive: Accumulated Cyclone Energy (ACE). This is a widely used metric for meteorologists to estimate the intensity of a hurricane season because it is an aggregation of the strength and longevity of all storms.

To be sure, ACE was far above the normal season, but it fell far short of what would be expected for 30 storms. To date, the total ACE for the 2020 hurricane season is 178, nowhere near the record of 245 set in 2005. That’s because 2005 also had four Category 5 hurricanes, compared to only one this year; more hurricanes overall than 2020; and longer lasting storms, too.

The 2004 season, featuring hurricanes Charley and Ivan, had only half the number of storms of 2020 yet produced more ACE.

So why did 2020 underperform in the ACE department? One reason is that the first half of the season produced mostly weak systems. And unlike 2005, when many of the hurricanes were long-track storms, most of the strongest storms in 2020 formed closer to land so they did not last as long. This was especially true for the end-of-season Greek alphabet named storms, many of which formed in the Caribbean and made landfall shortly thereafter. They just did not have the time to accumulate as much ACE.

While many of the records set in 2020 will likely stay in the record books for years to come, one thing is certain: As long as society continues to release heat-trapping greenhouse pollution, climate change will continue to power hurricane seasons that defy the odds.