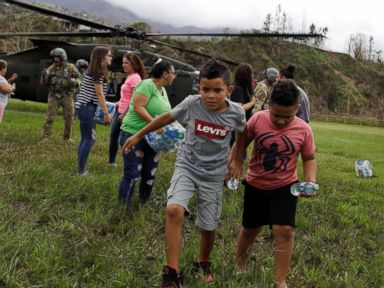 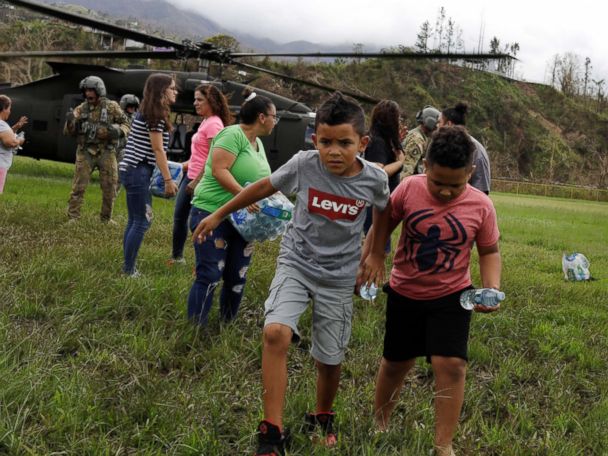 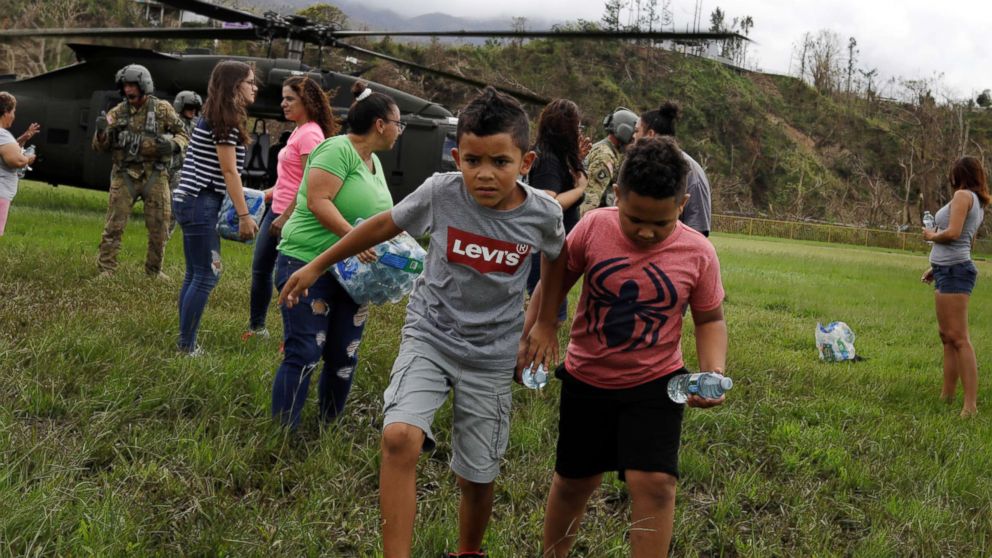 Sixteen days after Hurricane Maria ravaged Puerto Rico, Maria de Lourdes Sandoval heard helicopters over her village of Bajura. She ran to signal them, forcefully waving her arms and crying for help as they touched down on a nearby soccer field. “I’m helpless. I don’t have a home, don’t have anywhere to live. I don’t have furniture, no bed, no clothes,” Sandoval, 47, said.

Daily missions are flown out of the Roosevelt Roads Naval Station in Ceiba, which was closed in 2004 but is now being used by the Army, Air Force, Marines and Navy.

“It hurts because I remember how it used to be, and now it’s completely different,” said Sgt. First Class Eladio Tirado, who was born and raised in Carolina, Puerto Rico. After not visiting for roughly five years, he returned home in a Blackhawk helicopter. “Everything is so much gone. The vegetation, everything is brown, everything is dead.”

On a recent mission over Luqillo, Tirado asked the pilots to fly over his family’s home because he had been unable to reach them by phone. The helicopter circled the house. No one was there, but Tirado was confident the message would reach his family: he’s here and he’s helping.

Media reports led crews to the village of San Lorenzo, which had received no federal assistance since the hurricane. Dozens of people pressed against a fence to watch helicopters land, anxiously awaiting food and water. Crews are also transporting people to emergency centers and mapping open roads so trucks can make deliveries.

Rooftop messages like one near Humacao come through loud and clear. “HELP USA PLEASE P.R.” Near Ciales, as Blackhawks from the 1st Armored Division flew over, people on a rooftop reached toward the sky to signal they needed water. As helicopters scouted the island’s mountainous interior one recent Saturday a woman held a jug in the air.

They circled above houses built on top of mountains to find a level field to unload their precious cargo. One field looked open and a Blackhawk came within 8 feet of the ground, but it could not land. Loaded with 100 cases of water, the helicopter flew off, leaving behind thirst and desperation. The crew soon found another needy community, Verde de Comerío, where it was able to land.

Villagers quickly lined up to help soldiers pass food and water to a crowd. One woman hugged Pilot Chris Greenway to thank him for water. In less than 10 minutes, hundreds of bottles of water were given to families, emptying the helicopter.

This village also needed medicine and families with babies had no way of getting basics. Diapers and formula have become luxury goods. But every village asks for water. The lack of potable water is slowly choking these villages and helicopters can only carry so much. Every trip leaves some who get nothing.

The crews can only hope they can return soon enough to make a difference. “This island will never stop,” Tirado said. “People will rebuild, we will continue forward, and they’re going to see a better tomorrow.”

Fri Oct 13 , 2017
For CNBC’s Jim Cramer, the stock market’s major averages routinely hitting record highs is anything but humdrum. “But as much as I love it when stocks go higher, I recognize that the market can only go up as much the earnings let it, and next week we get a parade […]