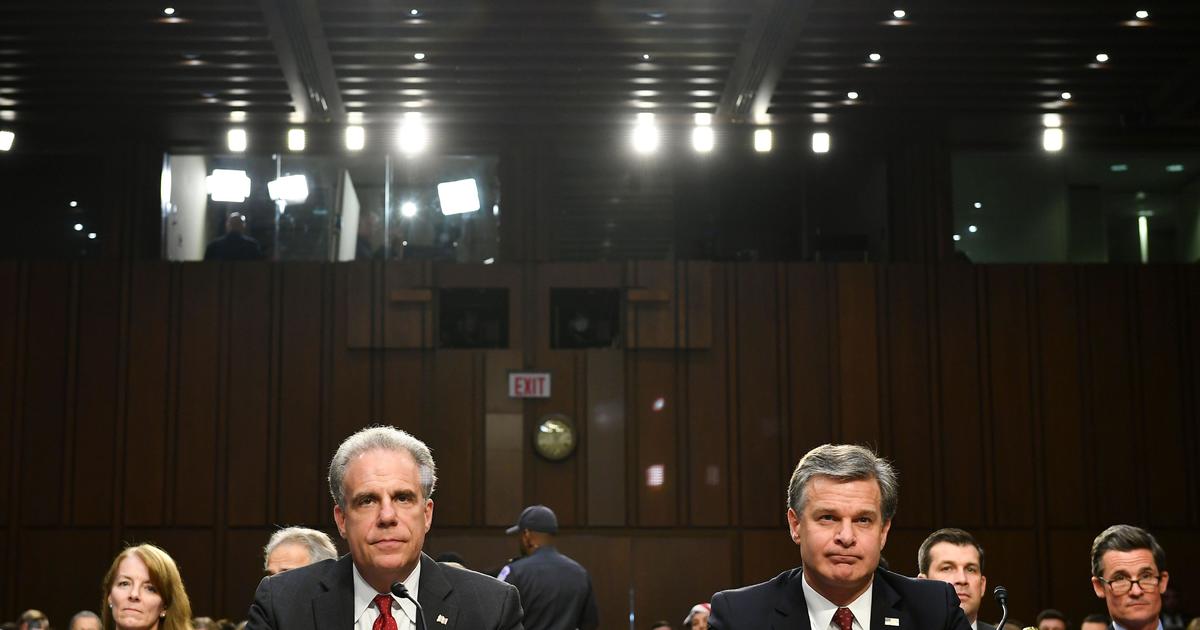 The Senate Judiciary Committee is holding a hearing on the Justice Department inspector general report on the Justice Department’s and FBI’s handling of the Hillary Clinton email investigation in advance of the 2016 presidential election.  DOJ Inspector General Michael Horowitz and FBI Director Christopher Wray are expected to be pressed on the report’s findings Monday, in the wake of the report’s long-awaited release on Thursday.

The report, more than 500 pages long, focused on former FBI chief James Comey and the decisions he made during the course of the Clinton investigation. It described Comey as “insubordinate” while also criticizing then-Attorney General Loretta Lynch for weak leadership. It also criticized FBI official Peter Strzok for his priorities and communications in the Clinton email probe.

However, the report found that political bias did not affect the investigation and it gave support to the decision not to prosecute Clinton.

Chairman Chuck Grassley said former Attorney General Loretta Lynch,  fired FBI Deputy Director Andrew McCabe and former FBI Director James Comey were all invited for Monday’s hearing, but denied the offer to testify. Grassley said attorneys for Comey said he was out of the country, but said according to Comey’s twitter feed, he was in Iowa for much of the weekend.

“He seems to be having a wonderful time,” Grassley remarked. He added that Comey “has time for book tours and television interviews but apparently no time to assist this committee which has primary jurisdiction over the justice system.”

Here are the highlights from Monday’s hearing:

IG Horowitz testified that the report found “inappropriate political messages cast a cloud” over the course of the email probe and further “sowed doubt about the credibility of the FBI’s handling of it, and impacted the reputation of the FBI.”

“We found the implication that senior FBI employees would be willing to take official action to impact a presidential candidate’s electoral prospects to be deeply troubling and antithetical to the core values of the FBI and the Department of Justice,” Horowitz added in his opening remarks.

Horowitz noted, however, that there was “no evidence” of political bias or “improper considerations” in the closing of the investigation without the prosecution of Clinton. He says that the conclusions in the investigation was “based on the prosecutors’ assessment of the facts, the law, and past Department practice.”

The IG said with regard to Strzok’s text messages, he couldn’t think of anything more concerning than a law enforcement officer suggesting they may use their power to affect an election.

Horowitz says that Comey “clearly departed from FBI and Department norms, and his decisions negatively impacted the perception of the FBI and the Department as fair administrators of justice.” He says that Comey’s announcement at the close of the investigation “included inappropriate commentary about uncharged conduct, announced his views on what a ‘reasonable prosecutor’ would do, and served to confuse rather than clarify public understanding of his recommendation.”

Horowitz also called into question Comey’s letter to Congress announcing that the investigation would be renewed in light of newly discovered emails found on Huma Abedin’s estranged husband Anthony Weiner’s laptop, just days before the 2016 election.

When pressed on if Comey was expecting a Clinton win in 2016 and was thinking about his future in drafting his final assessment of the investigation, Horowitz told lawmakers “that was a concern we had.” Comey had started drafting his statement on the email investigation in May and it wasn’t until July when he made his final public announcement that the FBI would not be brining charges against Clinton.

Horowitz testified that the IG’s office “had testimony when he explained through his chief of staff why he was going to do what he did, he was concerned about his survivability.”

Wray says that the FBI plans to hold accountable “any employee for potential misconduct” to the DOJ’s Office of Professional Responsibility and carry out any disciplinary actions “without delay.”

“We will not hesitate to hold people accountable,” said Wray. He added, “We won’t hesitate to throw the book at people who violate” FBI policies.

He said that moving forward, the FBI will make sure every employee, from agent to senior executives, “understands the lessons of this report through in-depth focused training” to make sure “we don’t repeat the mistakes identified in this report.”

Policies and procedures the FBI aims to retrain its employees on include the importance of objectivity, avoiding the appearance of potential bias, conflicts of interest as well as proper contacts with the news media. He said the FBI now has a “leak investigations unit” to review unauthorized disclosures to the media by any FBI employees.

Wray, pressed on his seriousness of the report, said he doesn’t intend to downplay the significants of the report. He said the fact he is mandating a full training of senior members of the FBI in light of its findings “is a measure of how seriously I take this.”

Does the report exonerate Trump?

IG Horowitz said his office “did not look into collusion questions” when asked if the report exonerates President Trump from possible collusion with Russia.

Earlier, Horowitz was pressed on if there was any reason for a disparity in treatment between the Clinton email investigation and Trump campaign investigation. He told lawmakers “our focus in this review was on the Clinton e-mail review.”

On the Russia investigation, Wray told lawmakers that he does “not believe” that Special Counsel Robert Mueller “is on a witch hunt.”

Mon Jun 18 , 2018
Starting Monday, tobacco companies are supposed to have statements on their websites that warn American consumers about the health risks and addictiveness of their products. The statements were ordered May 1 as part of a 2006 federal court decision that found the major cigarette manufacturers, including R.J. Reynolds and Philip […]