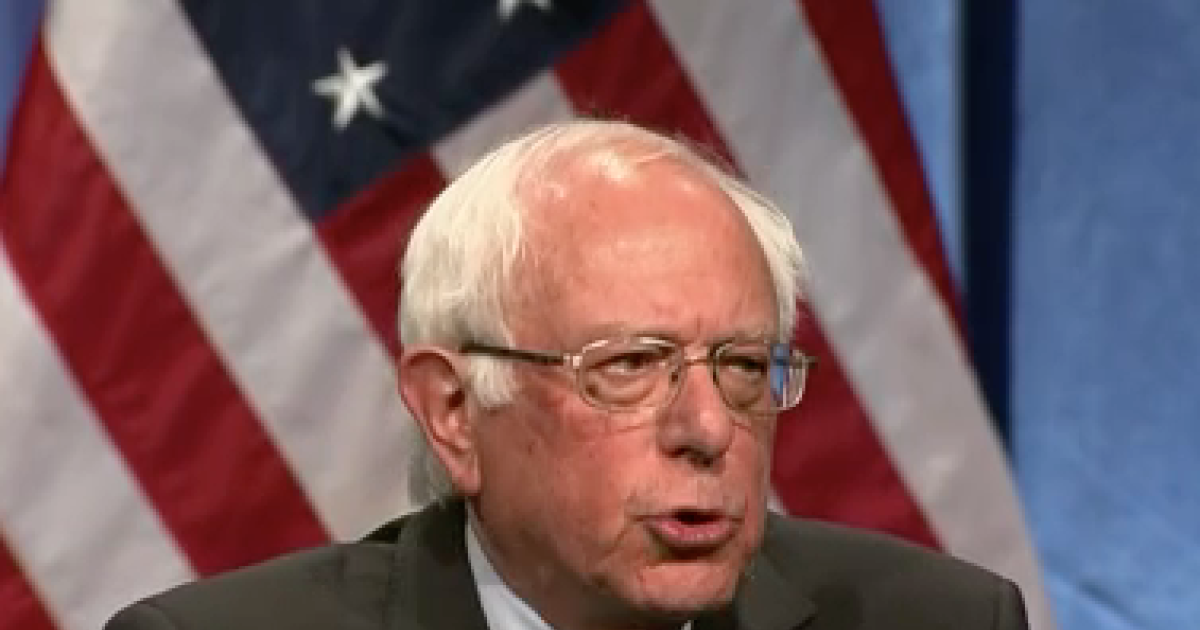 Vermont Sen. Bernie Sanders offered a full-throated defense of democratic socialism in a speech in Washington on Wednesday, invoking the legacy of President Franklin D. Roosevelt to call for a “21st Century Bill of Rights.”

“Over 80 years ago Franklin Delano Roosevelt helped create a government that made transformative progress in protecting the needs of working families,” Sanders told the crowd at George Washington University. “Today, in the second decade of the 21st century, we must take up the unfinished business of the New Deal and carry it to completion.”

Sanders said his vision of democratic socialism requires “the moral conviction to choose a different path, a higher path, a path of compassion, justice and love.”

“We must recognize that in the 21st century, in the wealthiest country in the history of the world, economic rights are human rights,” he said. “That is what I mean by democratic socialism.”

Since his previous run for president, “socialism” has increased in popularity. A 2018 Gallup poll found that 37% of Americans viewed socialism favorably, an increase of two percentage points from 2016. Conversely, 47% of Democrats viewed capitalism positively, down from 56% in 2016. And while socialism was significantly less popular than capitalism and free enterprise, it was the only one of those three that increased in popularity nationally between 2016 and 2018.

Adding more wind to Sanders’ sails, earlier this week a Harris poll found that 55% of women between the ages of 18 and 54 would prefer to live in a socialist country over a capitalist country.

But Mr. Trump has wielded the label as a weapon, often linking Democrats to socialism on Twitter and to the press. Sanders addressed that criticism directly in Wednesday’s speech.

Sanders said the president “believes in corporate socialism for the rich and powerful. I believe in a democratic socialism that works for the working families of this country.”

The Vermont independent said his 21st Century Bill of Rights would establish that every American, regardless of income, has a right to a job with a living wage, health care, education, affordable housing, a clean environment and a secure retirement.

While Sanders embraced the term on Wednesday in Washington, he has seldom directly referenced it on the campaign trail. He made no mention of democratic socialism in his campaign kickoff remarks in March, nor in his campaign announcement video.

Last month, at a senior citizens town hall in Henderson, Nevada, a woman wished for Sanders to be more direct.

“Please stress that socialism is not communism. That’s very, very important that you stress that,” she said.

The senator replied, “Thank you. I will, as a matter of fact.”

Some of Sanders’ challengers rivals for the nomination explicitly reject his embrace of the democratic socialist label.

“I’m a full-throated capitalist,” Delaney said. “What the United States of America is, is a free market economy. Where capitalism is able to work its magic, which is to innovate and create jobs.”

Earlier this month, former Colorado Gov. John Hickenlooper was raucously booed at the California Democratic Party State Convention after saying, “Socialism is not the answer.”

“If John would have said that speech here [on Wall Street] he probably would have gotten a big cheer from these capitalists here,” Bennet told the news Cheddar. “It’s different from San Francisco.”

“There’s a Twitter universe out there that has move extremely far left. I think that is different from the base of the party,” Bennet said.

Neither Hickenlooper, Bennet nor Delaney have surpassed 1% support in any national poll this year.

While Sanders’ defense of democratic socialism clearly distinguishes himself from moderates running — including front-runner Vice President Joe Biden — it also gives the senator a chance to stake his claim on progressive turf that will be threatened by candidates like Massachusetts Sen. Elizabeth Warren, which has recently enjoyed a bump in polling.