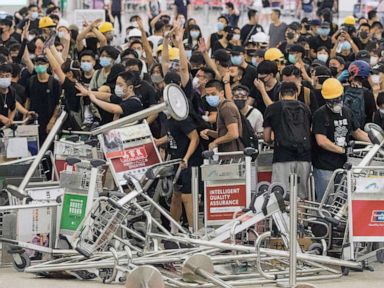 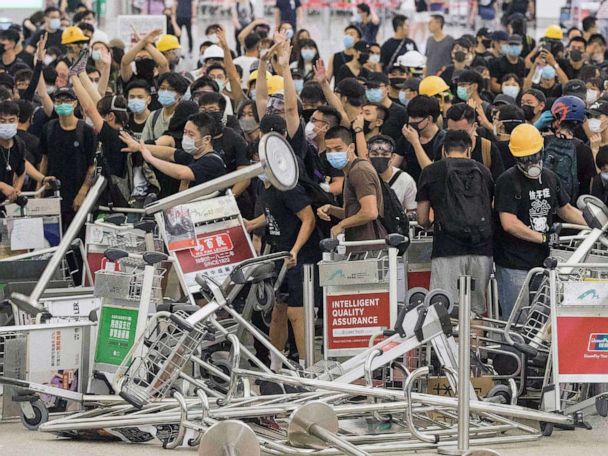 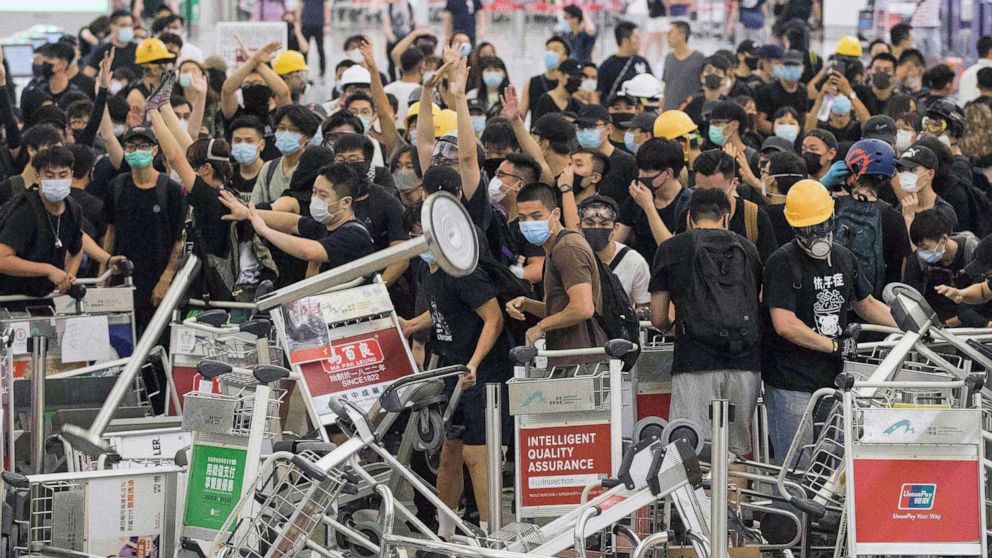 Riot police stormed the Hong Kong International Airport on Tuesday as protests by thousands of anti-government demonstrators forced flights to be canceled for the second straight day.

Travelers at one of the world’s busiest airports were advised that check-in had been suspended and hundreds flights were cancelled, and that they should leave the terminals as quickly as possible and contact airlines for more information.

The clashes appeared to represent an escalation 10 weeks after the protest’s massive, peaceful beginnings in early June, when hundreds of thousands marched in the semi-autonomous city against a now-suspended extradition bill. A Chinese official said Tuesday that protesters “have begun to show signs of terrorism,” and China appeared to be weighing a crackdown on the democratic movement.

Bolstered by anger over the crackdown by Hong Kong police, the protests has grown more confrontational in recent weeks and reached new levels last Monday with a city-wide strike that disrupting traffic and hundreds of flights.

After weeks of issuing warnings, but deferring to Hong Kong authorities to quell protests, Beijing has hinted at a more assertive posture. Chinese paramilitary police were seen in video released by the state holding exercises in Shenzhen, China, which sits across the border from Hong Kong. Images circulated online showing a convoy of armored personnel carriers from the People’s Armed Police traveling to the site.

U.S. President Donald Trump meanwhile took to Twitter to say that U.S. intelligence “has informed us that the Chinese Government is moving troops to the Border with Hong Kong. Everyone should be calm and safe!”

Earlier on Tuesday, Trump told reporters he hoped the situation in Hong Kong “works out for everybody, including China, by the way,” and that “nobody gets killed.”

The U.S. State Department has urged “all sides to exercise restraint,” according to a spokesperson, but it has vocalized more support for the protesters than Trump, saying the U.S. is “staunch in our support for freedom of expression and freedom of peaceful assembly in Hong Kong.”

The spokesperson also urged China “to adhere to its commitments… to allow Hong Kong to exercise a high degree of autonomy” and noted “concerns about the erosion of Hong Kong’s autonomy.”

China resumed control of Hong Kong in 1997 after 156 years of British rule and pledged to respect the autonomy and way of life of the city, which had become an economic powerhouse and bastion of freedom in the region.

Tensions come as the United States and China have been locked in a year-long trade war and both sides have accused the other of engaging in unfair practices and dragging their heels to reach a deal. Senior U.S. officials like Vice President Mike Pence and Secretary of State Mike Pompeo have been sharply critical of China, especially its increasingly strong hand around the world and human rights record at home, and last month Pompeo called China’s treatment of its Uighur Muslim minority the “stain of the century.”

On Tuesday, Pompeo met in New York with China’s top diplomat Yang Jiechi, the director of the Central Foreign Affairs Committee. The two men “had an extended exchange of views on U.S.-China relations,” according to State Department spokesperson Morgan Ortagus. The State Department would not say how long the meeting had been planned in advance and whether they discussed Hong Kong.

The protests in semi-autonomous Hong Kong began in June, when hundreds of thousands of people took to the streets to march against a proposed change to Hong Kong’s extradition law that would allow individuals to be sent to mainland China for trial. The proposal prompted fears that China would use it to round up political dissidents.

Hong Kong’s leader, Carrie Lam, suspended consideration of the bill indefinitely but stopped short of completely withdrawing it from the legislative agenda. She refused to say Tuesday whether she had the authority to do so, prompting outrage from protesters who call her a puppet for Beijing.

Tuesday marked the fifth consecutive day that the black-clad demonstrators have occupied the airport. Protesters held an orderly sit-in at one of the terminals and elsewhere clashed with police in chaotic scenes that unfolded on live television.

At one point, a group swarmed around and detained one man, believed to be an undercover police officer, and some protesters attacked him while others tried to shield him. Medics eventually arrived and cared for him before he was carried out of the airport.

Hu Xijin, the editor-in-chief of China’s state-owned nationalist newspaper Global Times, later said the man was one of his reporters and had been sent to the hospital.

Sean Lavin, an American who is in Hong Kong on vacation, said that he and his travel companions are slated to fly out of the airport on Wednesday, but the protests have left that in question.

“I’m supposed to leave tomorrow late afternoon so I’ve been monitoring the airport [to] see if we can,” Lavin told ABC News Live by phone. “Right now we don’t know if we can leave so we’re watching very closely.”

Lavin said his group arrived in Hong Kong from Phuket, Thailand, several days ago, and that they were surprised to find throngs of protesters after making their way through customs.

“It was something I’ve never experienced before,” he said, adding that the protesters were “very polite” and helped his group find their way out of the airport.