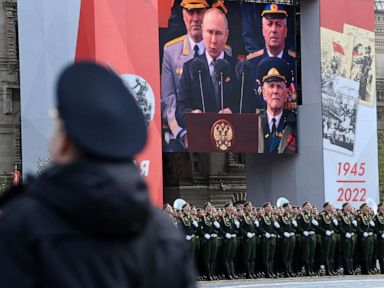 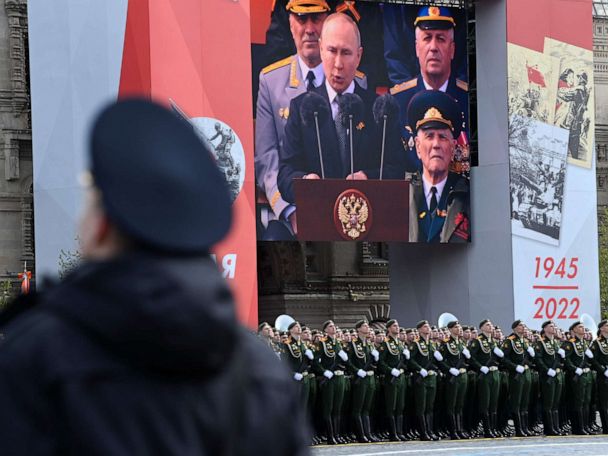 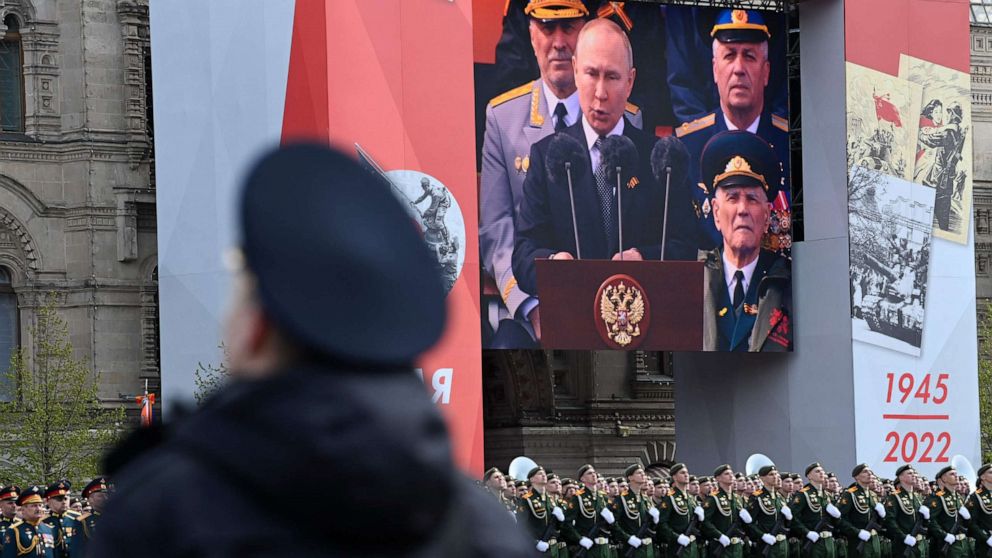 “You are fighting for the motherland,” the Russian leader told his troops.

LONDON — During a military parade in Moscow on Monday, Russian President Vladimir Putin addressed his troops fighting in neighboring Ukraine, but offered little insight into his next steps.

“You are fighting for the motherland, for its future, so that no one forgets the lessons of the Second World War,” Putin said in a patriotic speech for Victory Day, a national holiday in Russia commemorating the Soviet Union’s defeat of Nazi Germany in World War II.

“Now here, on the Red Square, soldiers and officers from many regions of our vast homeland stand shoulder to shoulder, including those who came directly from Donbas, directly from the combat zone,” Putin said.

Putin launched a “special military operation” into Ukraine on Feb. 24, with Russian forces invading from Belarus, to the north, and Russia, to the east. They quickly reached the outskirts of Kyiv, but ultimately failed to seize the Ukrainian capital and other major cities in the north. Russian forces were met with strong resistance from Ukrainian troops, despite weeks of relentless bombardment that decimated entire neighborhoods and claimed civilian lives.

The Russian military announced on March 29 it would scale down activities in the north around Kyiv and Chernihiv and instead focus its efforts on the “liberation” of the disputed Donbas region in the east, which is home to a mostly Russian-speaking population. Russia-backed separatist forces have controlled two breakaway republics of eastern Ukraine’s Donetsk and Luhansk oblasts in Donbas since 2014, following Russia’s annexation of Ukraine’s Crimean Peninsula. On April 18, the Russian military began a full-scale ground offensive in Donbas in an attempt to capture the strategic port city of Mariupol and to secure a coastal corridor to Crimea.

Although he showed no signs of backing down, Putin on Monday did not make any declarations of war, peace or victory during his remarks at the Victory Day parade. He drew parallels between Soviet soldiers battling Nazi troops and the Russian forces fighting now in Ukraine, as he has vowed to “de-Nazify” the former Soviet republic. He also spoke of Donbas as if it was already part of Russia.

“These days, you are fighting for our people in the Donbas. For the security of our homeland, Russia,” he said. “You are defending what fathers and grandfathers, great-grandfathers fought for.”

Putin accused Ukraine of seeking to attain nuclear weapons and planning a “punitive operation in the Donbas, for an invasion of our historical lands, including Crimea.” He also laid blame on the West for refusing to have “an honest dialogue” about Russia’s demands for formal guarantees that Ukraine will never join NATO and that the alliance will pull back its forces from countries in eastern Europe that joined after the Cold War.

“Thus, an absolutely unacceptable threat was systematically created for us and directly at our borders,” Putin added. “The danger was growing everyday.”

The Russian leader claimed that attacking Ukraine “was a forced, timely and only right decision — the decision of a sovereign, strong, independent country.”

“Russia has given a preemptive rebuff to aggression,” he said.

Just hours before Putin’s remarks, Ukrainian President Vladimir Zelenskyy released a video message marking the 1945 victory over the Nazis, telling his country that “very soon there will be two Victory Days in Ukraine.”

“On the Day of Victory over Nazism, we are fighting for a new victory,” he added. “The road to it is difficult, but we have no doubt that we will win.”

Mon May 9 , 2022
A worker removes part of the damaged facade at the site of a deadly explosion that destroyed the five-star Hotel Saratoga in Old Havana, Cuba, Sunday, May 8, 2022. (AP Photo/Ismael Francisco) OAN NewsroomUPDATED 8:12 AM PT – Monday, May 9, 2022 Crews have continued to search through the rubble […]