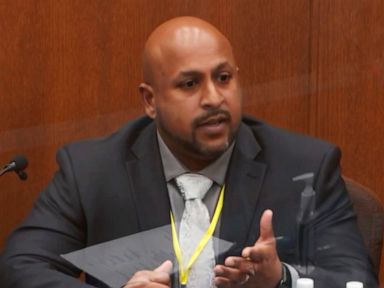 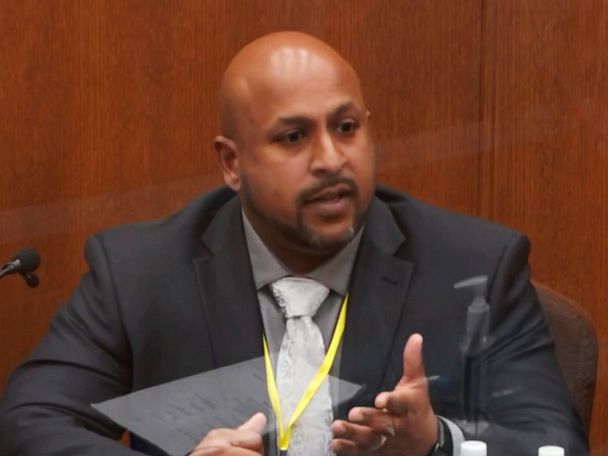 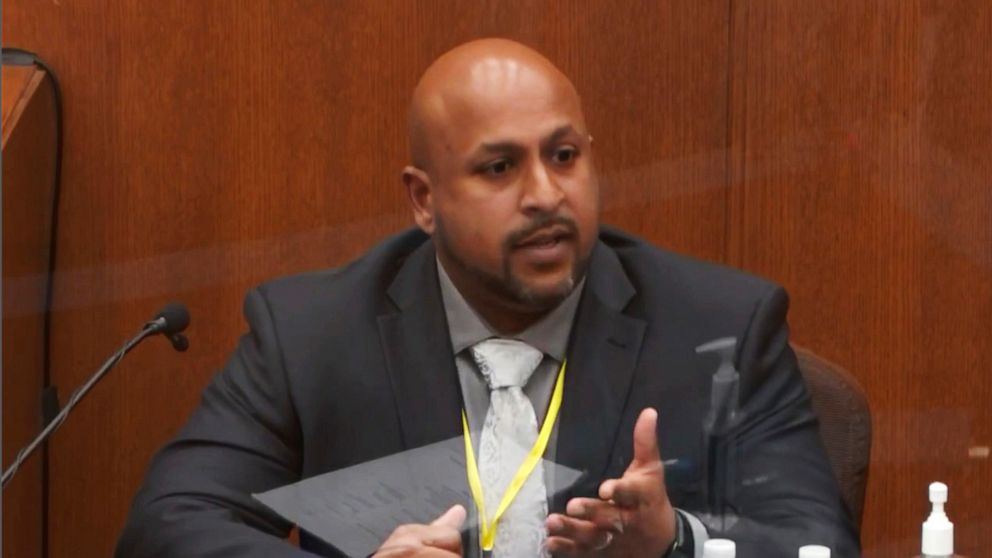 It wasn’t just former Minneapolis police officer Derek Chauvin’s knee on the neck of George Floyd that contributed to the alleged excessive force applied in the fatal 2020 arrest of the 46-year-old Black man, a prosecution expert witness testified Wednesday.

Los Angeles Police Department Sgt. Jody Stiger — a veteran use-of-force trainer, who is testifying as a paid expert witness for the prosecution — said his review of video evidence in Floyd’s arrest indicated that Chauvin was also using a “pain compliance technique” on Floyd’s handcuffed left hand.

“So pain compliance is a technique that officers use to get a subject to comply with their commands. As they comply, they are awarded with the reduction of pain,” said Stiger, who took the witness stand for the second day.

The Hennepin County District Court jury was shown freeze frames taken by a body camera of one of the other officers involved in the arrest that showed Chauvin’s hand apparently pressing into and manipulating the palm of Floyd’s hand as the handcuffed man was already in a prone position on the pavement pinned under the weight of three police officers.

He also noted that the handcuffs on Floyd were not double-locked, meaning they could end up ratcheting tighter as the person being detained moves.

Stiger said he could actually hear in the police body camera video the sound of the handcuffs ratcheting tighter on Floyd’s wrists.

Prosecutor Steve Schleicher asked Stiger what would happen if the handcuffed person did not comply.

He testified that his review of body camera footage and other video showed Chauvin used the pain technique on Floyd throughout the over 9 minutes Floyd was lying on the pavement with the officer’s knee on or near his neck.

Except for initially struggling with officers trying to get him into the rear of a squad car, Floyd, who was being taken into custody for allegedly using a phony $20 bill to buy cigarettes, showed no signs of resisting and repeatedly complained of pain and that he could not breathe.

Stiger described the force used on Floyd as deadly and said it should have stopped as soon as the officers removed the combative man from the squad car and placed him in the prone position on the ground with three officers — Chauvin, Thomas Lane and J. Alexander Kueng — pressing their weight on top of him.

Stiger testified that during the episode, Chauvin conversed with Floyd about his pain and labored breathing, but at no time did Chauvin and the other officers let up or attempt to place Floyd in a seated or side position to avoid the possibility of traumatic positional asphyxiation — a sometimes fatal occurrence in people handcuffed and held on their stomachs for a prolonged period of time.

“Positional asphyxia can occur even if there is no pressure, no bodyweight on a subject,” Stiger said. “Just being in that position and especially being handcuffed creates a situation where the person has a difficult time breathing, which can cause death. When you add bodyweight to that, then it just increases the possibility of death.”

Floyd appeared to lose consciousness while being held down, and paramedics testified last week that he did not have a pulse when they arrived at the scene.

On cross-examination, Chauvin’s attorney, Eric Nelson, grilled Stiger on a series of photographs appearing to show Chavin’s knee on Floyd’s shoulder blades at the base of his neck at different times during the encounter. On Tuesday, Lt. Johnny Mercil, a use-of-force trainer for the Minneapolis police department, was shown the same series of photos and agreed it appeared to be a “prone hold” that officers are permitted to apply with the knee on people who are aggressively resisting arrest.

“And the specific technique that you’re trained is for an officer to put his knee into what would be, like, the trapezius area, in between the shoulder blades at the base of the neck, right?” Nelson asked Stiger on Wednesday.

“Yes. The base of the neck,” Stiger replied.

Nelson asked if that was “standard protocol, standard police practice, basically in every single department that you’re familiar with?”

Special Agent James Reyerson of the Minnesota Bureau of Criminal Apprehension, the lead investigator in the case, testified that he and his team began collecting evidence in what he described as a “critical incident” involving police officers within hours of Floyd’s death.

Reyerson was shown a photograph he took of Chauvin on the night of the fatal encounter. He testified that Chauvin weighed about 140 pounds and was carrying about 30 to 40 pounds of equipment, including a bulletproof vest and a utility belt containing a gun, a pepper spray canister, ammunition and a radio.

Reyerson testified that he reviewed all of the videos in the case frame-by-frame and determined that Chauvin’s knee and most of his weight was on Floyd’s neck for the majority of the time he was being held prone on the ground.

He said that 50 agents from the Bureau of Criminal Apprehension were involved in the investigation, as well as up to 26 FBI agents.

“I believe our investigation was very thorough,” Reyerson testified.

Under cross-examination from Nelson, Reyerson said some evidence, including pills found in Floyd’s Mercedes-Benz SUV, were recovered more than six months after the vehicle had been initially searched, processed and photographed.

“Did you specifically take note at that time of the presence of pills in the Mercedes-Benz?” Nelson asked Reyerson.

Reyerson said that he reviewed 750 photos taken during the initial search of the Mercedes-Benz but did not notice the pills in any of them.

“OK. And so, it’s not that you didn’t preserve the evidence, you just didn’t notice it?” asked Nelson.

Nelson has been attempting to undermine the prosecution’s allegation that Chauvin killed Floyd by putting his knee on his neck. The defense lawyer has repeatedly attempted to show the jury that the drugs fentanyl and methamphetamine, combined with undiagnosed heart disease, caused Floyd’s death.

Nelson also asked Reyerson about a nearly inaudible statement Floyd made while being held on the ground that was picked up on police body camera video. After playing a 10-second part of the video, Nelson asked Reyerson if it sounded as if Floyd was telling the officers, “I ate too many drugs.”

Reyerson, who said he hadn’t heard the statement before, answered, “Yes, it did.”

Nelson earlier asked the same question of Stiger, who said he could not decipher what Floyd said.

After Reyerson was dismissed, prosecutor Matt Frank called him back to the witness stand and asked if he was able to review the video again when he left the courtroom. He said he viewed a longer portion of the video that included a discussion by police about possible drugs Floyd had ingested prior to his arrest.

After reviewing the video, Reyerson changed his answer to what he thought Floyd said.

McKenzie Anderson and Breahna Giles, both forensic scientists for the Bureau of Criminal Apprehension, testified about evidence collected at the crime scene, in Floyd’s SUV and the squad car police were trying to put Floyd in.

Anderson testified that she first searched Floyd’s SUV and the squad car on May 27, 2020, two days after Floyd’s death. She said she was asked by Reyerson to process Floyd’s vehicle again on Dec. 9, 2020, with instructions to look for evidence of drugs.

She said that during the December search, investigators found a box of Suboxone, a prescription medication to treat opioid addiction. She also said two other pills were discovered in the center console.

Giles said she tested the pills from the console and determined they contained methamphetamine and fentanyl.

Anderson testified that she also was asked by Reyerson to do a second search on the squad card on Jan. 27, 2021. She said during that search investigators found blood drops and pieces of pills in the rear of the police vehicle.

Giles said that the tests she did on pills found in the squad car determined they contained methamphetamine.

Thu Apr 8 , 2021
People protest in support of the unionizing efforts of the Alabama Amazon workers, in Los Angeles, California, March 22, 2021. Lucy Nicholson | Reuters More than 3,200 ballots were cast in a high stakes union election at one of Amazon’s Alabama warehouses, according to the Retail, Wholesale and Department Store […]