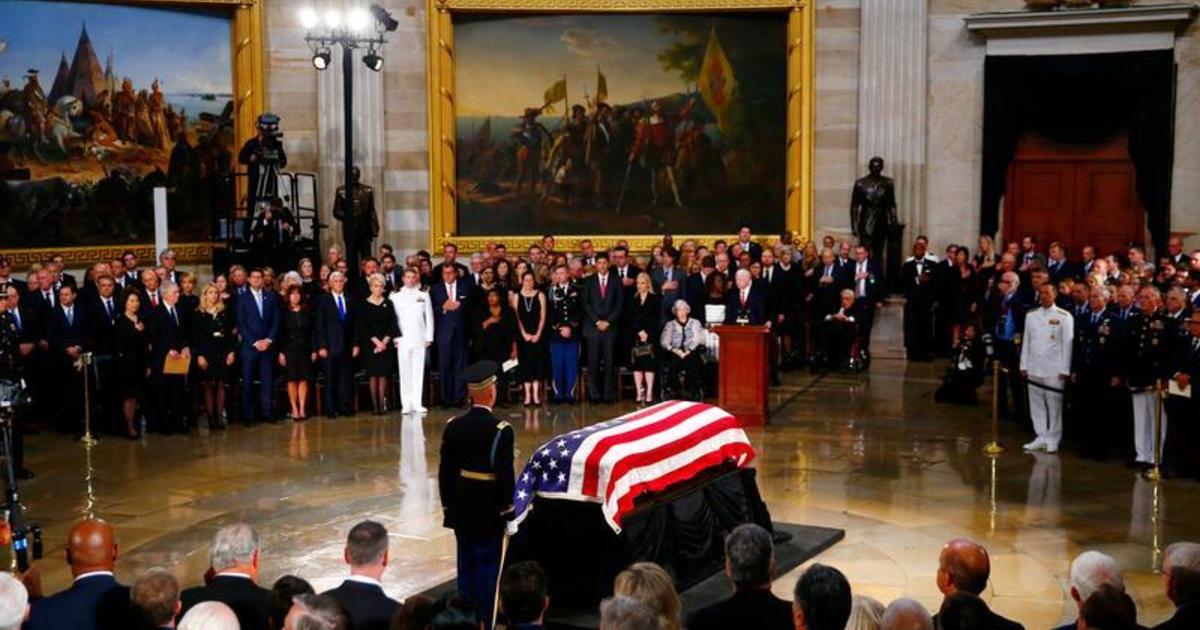 McConnell: We gather to recognize a great loss and celebrate a great life

It’s an honor to welcome you this morning.

We gather to recognize a great loss and celebrate a great life.

We celebrate six decades of devotion to the American idea and the cause of human freedom.

Generations of Americans will continue to marvel at the man who lies before us: The cocky, handsome Naval aviator who barely scraped through school, but then fought for freedom in the skies… Who witnessed to our highest values even through terrible torture… And who became a generational leader in the United States Senate, where our nation airs its great debates.

Now, “airing our great debates” is a gentle way to describe how John approached the work of a Senator.

I’ve long joked that his guards at the Hanoi Hilton probably needed group therapy after John was finished with them. Well, let’s just say: There were times when some of his Senate colleagues were tempted to form a support group of our own.

He treated every issue with the intensity the people’s business deserves. He would fight tooth and nail for his vision of the common good. Depending on the issue, you knew John would either be your staunchest ally or your most stubborn opponent.

At any moment, he might be preparing an eloquent reflection on human liberty… or a devastating joke, served up with his signature cackle and that John McCain glint in his eye.

He had America’s fighting spirit, our noble idealism, our solemn patriotism, and our slightly irreverent streak — all rolled into one.

I will miss a dear friend whose smile reminded us that service is a privilege… and whose scars reminded us of the great cost that brave souls pay for our freedom.

John felt like family. But of course, it is Cindy… and Roberta and Joe… and Doug, Andy, Sidney, Meghan, Jack, Jimmy, and Bridget who could truly call this man their own.

On behalf of the Senate and the entire nation — thank you.

Thank you for lending him to us longer than we had a right. Thank you for supporting him while he supported us.

Half a world away, wearing our nation’s uniform, John McCain stood up for every value that this Capitol Building represents.

Then, he brought that same patriotism inside its walls — to advocate for our servicemembers, our veterans, and our moral leadership in the world.

So it is only right that today, near the end of his long journey, John lies here.

In this great hall, under this mighty dome, like other American heroes before him.

Here, as a “restless wave” approaches the shores of eternity… We thank God for giving this country John McCain.