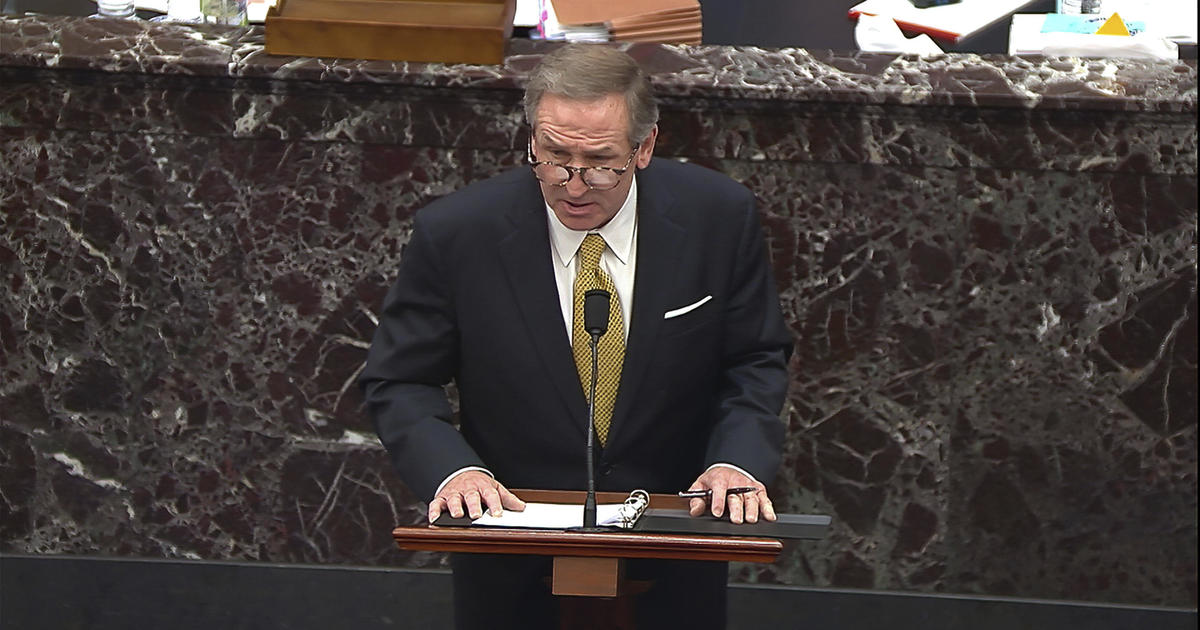 Senior aides to the Democrats’ House impeachment managers’ team still won’t say if the impeachment managers plan to call witnesses to make their case that former President Trump should be convicted for inciting an insurrection. But the senior aides say the managers are confident in the arguments they made during their two days of opening arguments.

“We are confident that our position will remain as strong as today. And at the end of this trial, the senators will have no choice but to vote to convict and disqualify,” an aide said.

With the former president’s lawyers indicating they will use just three to four hours of the 16 they are allotted to make their arguments, the House managers are prepared to move to a four hour question and answer session with senators as soon as Friday afternoon.

In a call with reporters Friday morning, the aides sought to rebut three of the arguments that the former president’s lawyers have indicated they will make to defend the former president: That the trial is unconstitutional because the former president is now a private citizen, that Mr. Trump’s speech is protected by the First Amendment, and that Democrats have used similar inflammatory political language.

The aides argued that the matter of constitutionality was settled by the vote at the start of the trial on Tuesday whether the Senate had jurisdiction to consider the impeachment. That vote was 56 to 44, with six Republicans joining Democrats to say it was within the Senate’s jurisdiction.

“By their oath that they have sworn they cannot consider jurisdiction issues,” one aide said.

“They really believe that the logical conclusion of the law is that a president who has lost an election can incite mob violence can direct his followers to ransack the Capitol, to stop the peaceful transfer of power, and that there is nothing that the United States Senate can do about it,” said another aide.

Several Republicans disagree with that point.

“If there is an opportunity or they think that there is a case, it should go to the courts, not to Congress where we don’t have a sitting president,” Republican Senator Joni Ernst of Iowa told reporters on Thursday evening.

One aide said that although there were several empty chairs from Republicans on Thursday, “I won’t paint them all with the same brush.”

“I won’t speculate as to their reasons for not being in their seats, but I would note separately it’s a testimony to the power of the overwhelming evidence that the managers have brought to bear in this case —  that  one of the only ways not to convict is to pretend you didn’t hear it,” the aide said.

The aides also argued that their case against Mr. Trump rests on much more than the speech he gave on January 6.

“President Trump was not impeached because of the words he used — viewed in isolation, without context [that] are beyond the pale,” an aide said. “Plenty of other politicians have used strong language, but Donald J. Trump was president of the United States. He sought to overturn a presidential election that has been held by every single court to consider it.”

Aides also called arguments about strong language used by other Democrats, which the former president’s lawyers are expected to show on tape during their arguments on Friday, are a “distraction campaign” that draw a “false equivalence” between the two issues.

“Like so much of what President Trump’s lawyers might say, that’s a gimmick. It’s a parlor game meant to inflame partisan hostility and play on our division,” an aide said.

Fri Feb 12 , 2021
Former President Trump’s legal team used a spliced video montage of prominent Democrats saying “fight” taken out of context as evidence in their opening arguments on Friday of Mr. Trump’s impeachment trial. The videos drew rebukes and even prompting laughter from some Senate Democrats. After accusing the House impeachment managers […]