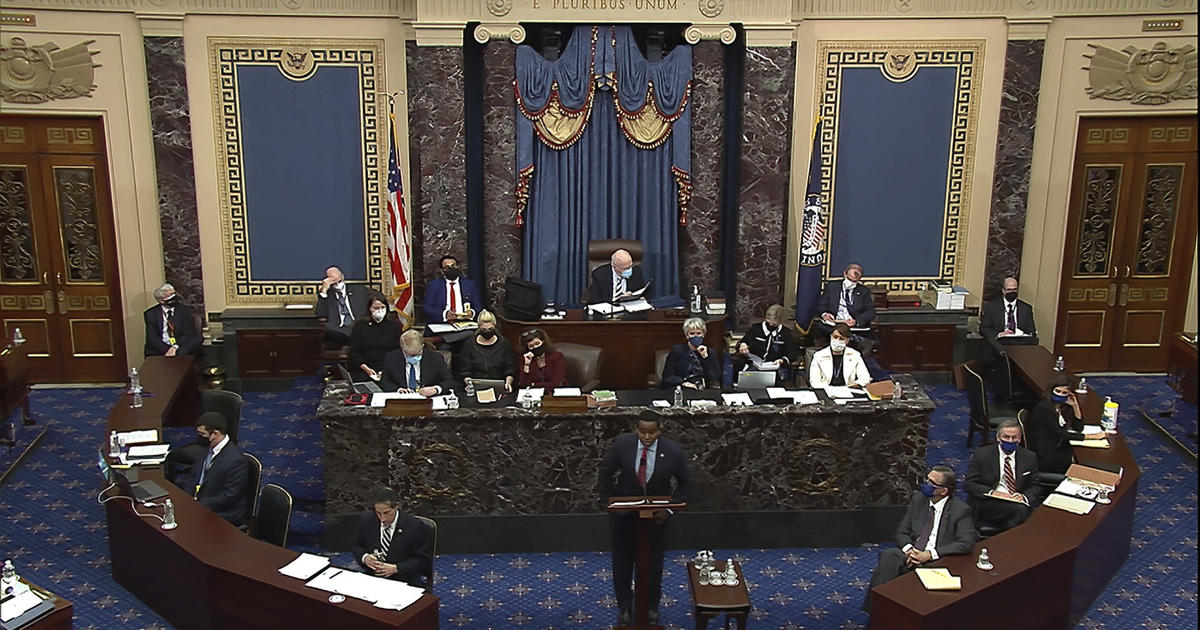 Congressman David Cicilline of Rhode Island said Mr. Trump’s conduct related to the January 6 assault harmed not only Congress, but also the democratic process and the scores of people who work inside the Capitol complex.

He began by noting the three people in the presidential line of succession — then-Vice President Mike Pence, House Speaker Nancy Pelosi and then-Senate President Pro Tempore Chuck Grassley — were all at risk, and the rioters made clear their intent to harm Pence and Pelosi.

“This mob was trying to overthrow our government, and they came perilously close to reaching the first three people in line to the presidency,” Cicilline said.

Rioters, he continued, were prepared to attack any lawmaker they came across, as demonstrated by comments made by mob members on social media posts and then cited in court filings.

Cicilline said Mr. Trump’s “true North Star isn’t America’s well-being, it’s not country first like our dear departed colleague John McCain. No, his directive is Trump first, no matter the cost, no matter the threat to our democracy.”

The Rhode Island Democrat stressed the trauma extended not only to lawmakers who were at risk, but also the bevy of staff members, custodial staff and food workers who work in the Capitol.

“There are countless people who are still living with the trauma of what happened that day,” he said.

Cicilline also highlighted the accounts of journalists who were at the Capitol to cover the tallying of electoral votes but found themselves in the middle of the assault instead, reporters who for years have been labeled the “enemy of the people” by Mr. Trump.

In addition to the emotional trauma inflicted, Cicilline noted the risk to public health, as the attack occurred in the middle of the coronavirus pandemic. He also honored the three U.S. Capitol Police officers who lost their lives in the wake of the riots: Officers Brian Sicknick, Howard Liebengood and Jeffrey Smith. Sicknick died of injuries suffered in the assault. Liebengood and Smith died by suicide in the days after the attack.

The injuries to law enforcement responding to the assault, he said, were extensive, as officers suffered concussions, irritated lungs and smashed ribs, for example. In all, 81 members of the Capitol Police and 65 officers with the Metropolitan Police were injured.

“Trump’s mob verbally denigrated their patriotism, questioned their loyalty and yelled racial slurs,” Cicilline said of the emotional pain inflicted. “They called them traitors, Nazis, un-American for protecting us.”

The congressman asked senators to consider the law enforcement officers, House and Senate staffers and Capitol employees who were screamed at by rioters hurling racist slurs and were affected by the violence when they ultimately cast their votes to convict or acquit.

“Is this America? What is your answer to that question. Is this OK?” he said. “If not, what are we going to do about it? These people matter. These people risked their lives for us, so I ask you respectfully to consider them, the police officers, the staff of this building when you cast your vote.”

Cicilline noted the unprecedented nature of the attack — for the purpose of derailing a constitutionally mandated process — and stressed an assault on the peaceful transfer of power did not even happen during the Civil War.

But “it did just happen because of the cold, calculated and conspiratorial acts of our former president, Donald J. Trump.”