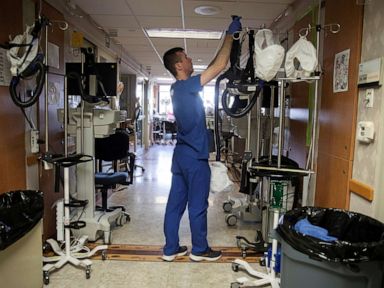 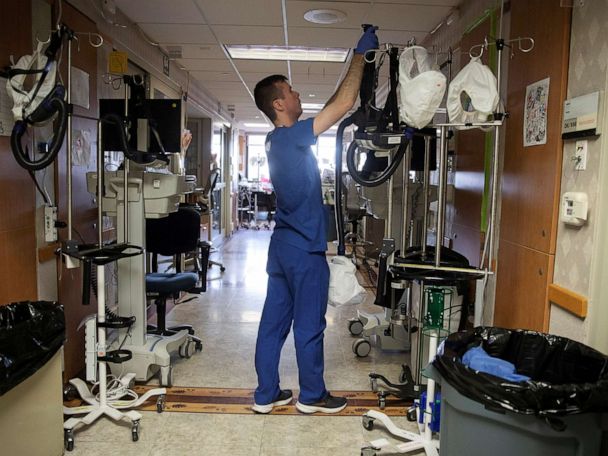 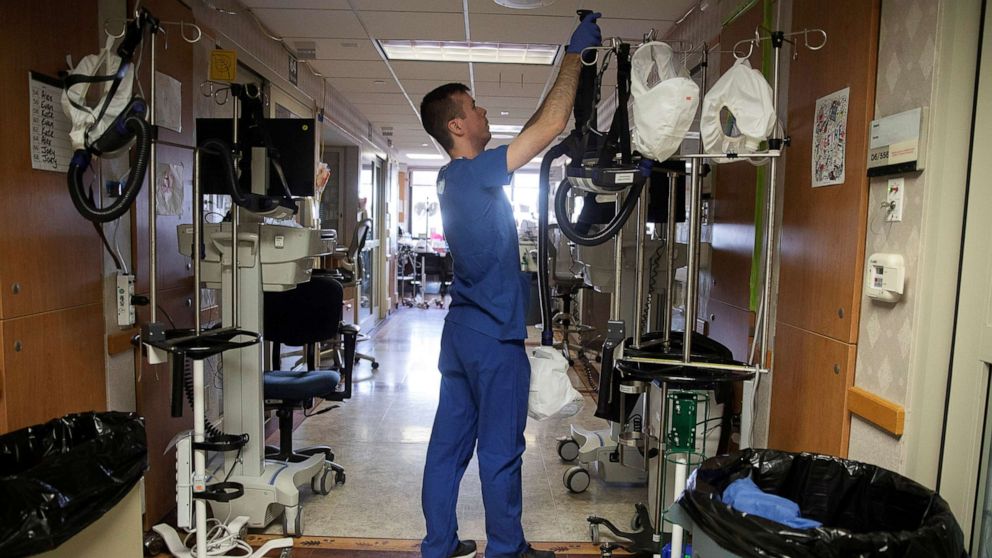 Goshen Health Hospital in Indiana has had to issue a public call for help from people with medical experience. In a Facebook post, the CEO wrote, “We invite you to consider if you are someone who could make a difference.”

The Mayo Clinic in Minnesota is bringing back retirees, redeploying employees from other parts of the country, and reassigning researchers to patient care after 905 employees contracted COVID-19 in the last two weeks.

And in North Dakota, the governor announced last week that to avoid a shortage of staff the state would implement “crisis” guidelines that allow nurses who test positive for COVID-19 to continue to work, as reported by the Grand Forks Herald.

Hospitals across the country are facing an influx of COVID-19 patients, the most Americans hospitalized for the disease at any other point in the pandemic. And after struggling with shortages of personal protective equipment, intensive care unit beds, ventilators and other equipment, hospitals are now facing a shortage of a harder to replace resource – health care workers.

“While hospitals can add beds, it is much harder to bring in additional health care workers, many of whom are justifiably experiencing a significant emotional and physical toll due to the impact of the pandemic,” Nancy Foster, vice president of quality and patient safety policy for the American Hospital Association said in a statement.

Eighteen percent of hospitals in the country said they had a critical shortage of medical staff on Nov. 18, according to data from the Department of Health and Human Services first obtained by The Atlantic. And 22% say they expect to experience a critical staffing shortage in the next week.

In some states the statistics are even worse. In five states, more than a third of hospitals report critical staffing shortages.

Six states, Arkansas, Kansas, Missouri, New Mexico, Oklahoma, and Wisconsin, report that more than 30% of hospitals had a critical shortage of staff last week and several other states are just below 30%.

In North Dakota and the U.S. Virgin Islands, at least half of hospitals don’t have enough staff, and the second hospital in the Virgin Islands is expected to become overwhelmed in the next week.

Alex Garza, chief community health officer of SSM Health told ABC News Live the hospital’s staff is two weeks away from being overwhelmed by the increasing number of COVID-19 cases in the St. Louis area.

“Our health care heroes have fought valiantly day after day but we have no reserves, we have no backup that we can suddenly muster to come in and save the day,” Alex Garza, chief community health officer of SSM Health said in a briefing last week.

Nurses at St. Mary’s Medical Center in Bucks County, Pennsylvania, made the difficult decision to strike last week. Jim Gentile, a registered nurse at St. Mary’s, said they were being put in a dangerous situation because so many nurses have left that hospital for higher-paying jobs, leaving them without enough staff to deal with the surge.

“In two weeks we’ve doubled the number of COVID patients in our hospital and we thought we have to sound the alarm now because there are not enough nurses to take care of the patients,” he told ABC’s Brad Mielke on “Start Here.”

“That’s called dangerous. It’s extremely dangerous. When a patient comes to a hospital, they deserve a registered nurse to take care of them. If you have six to one ratio and they’re all COVID patients and one starts to go bad, you spend the next two hours with that one patient. Those other five patients are totally ignored behind glass, behind isolation room. We can’t even see them. It’s dangerous.”

Vice President Mike Pence told governors Monday the federal government was “ready to roll our sleeves up and meet those capacity needs” on staffing shortages.

The North Dakota Department of Health announced that 60 Air Force medical personnel were being dispatched to the state. And White House Spokesman Michael Bars said more than 2,100 federal medical personnel are on the ground around the country.

“Currently, several thousand public health and medical personnel have been surged across all 50 states, territories, and tribal nations to support frontline responders and our hospital systems, as well as over 21,000 additional federal personnel deployed throughout the U.S. to support the whole-of-government coronavirus response,” he said in a statement.

Federal agencies have sent medical staff to more than 10 states in response to requests for help over the last two weeks, the Federal Emergency Management Administration said in a statement Friday.

Some nurses from New York City are also traveling to parts of the country where the virus is more severe to repay the favor from hospitals that send hundreds of nurses to help when New York was the epicenter of cases in the U.S. in April.

Intermountain Healthcare in Utah announced that 31 nurses from New York City were helping in intensive care, emergency, and surgical units around the state. The system is also hiring more than 200 traveling nurses, officials said in a press conference Friday.

But nurses across the country say more staff isn’t the only thing they need. They say everyone in communities around the country need to wear masks and follow guidelines like social distancing and avoiding indoor gatherings to slow the rapid spread of infections.

CDC studies have shown that parts of the country that require people to wear masks see less of the virus circulating in the community. In Kansas, COVID-19 cases decreased 6% in counties that kept a mask mandate over the summer. But in counties without a mandate COVID-19 cases increased 100%.

The CDC says wearing a face mask provides protection from exposure to the particles that carry the virus for both the person wearing it and anyone they come in contact with.

Public health experts say if 95% of Americans wore a face mask consistently it would make it much more difficult for the virus to spread, possibly preventing as many as 130,000 deaths.

“Everyone’s saying ‘it’s the year of the nurse,’ you know, health care heroes, and the thing is we can all be heroes just by doing one little thing and that’s wearing a mask and keeping our six feet,” Sarah Grabauskas, an ICU nurse in Idaho told ABC News.