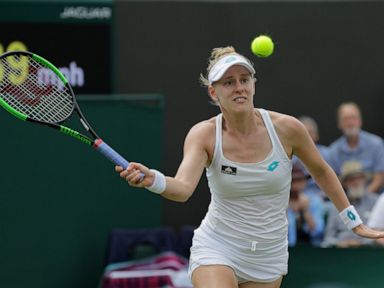 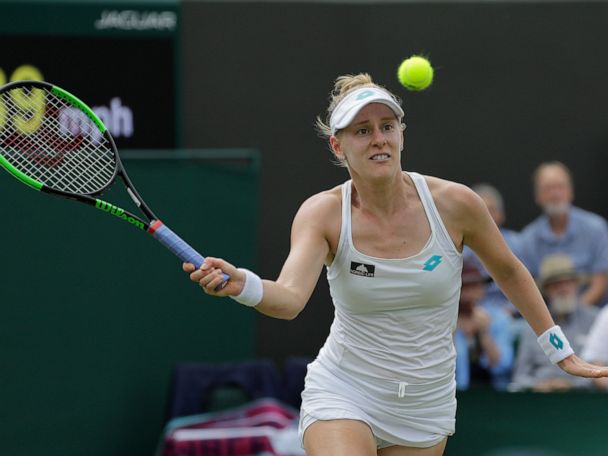 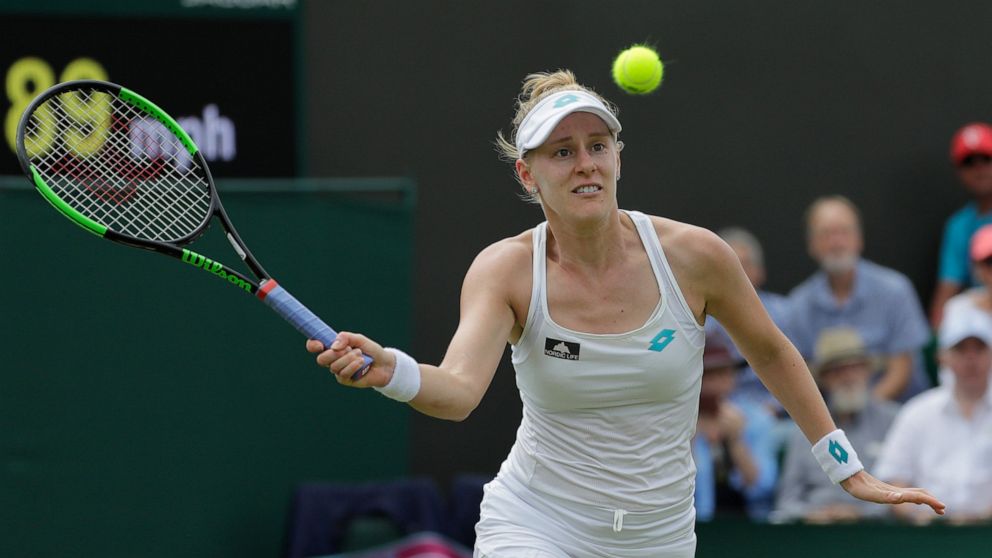 The Latest at Wimbledon (all times local):

Muchova won the last three games of the match and converted her third match point with a return that clipped the net cord.

Pliskova broke for an 11-10 lead but couldn’t serve out the match as she was broken back at love.

If the score had reached 12-12, the pair would have played the first deciding-set tiebreaker since Wimbledon introduced new rules for this year’s tournament.

In the past, there were no tiebreakers in deciding sets.

The longest match in Wimbledon history was in 2010, when John Isner beat Nicolas Mahut 70-68 in the fifth set. Last year, Kevin Anderson beat Isner 26-24 in the fifth set in the semifinals.

Coco Gauff’s Wimbledon run is over.

Halep broke Gauff five times and took advantage of 29 unforced errors. Gauff saved two match points when serving at 5-2 but Halep clinched the win when the teenager sent a forehand wide in the next game.

Gauff was playing in her first Grand Slam tournament after becoming the youngest player to qualify for Wimbledon’s main draw in the professional era and knocked out five-time champion Venus Williams in the first round.

Halep reached the Wimbledon quarterfinals for the fourth time and will next face Zhang Shuai of China.

Nadal dominated from the start, breaking Sousa in his first two service games to take a 4-0 lead in the first set. The Spaniard never faced a break point and converted six of the eight he created on Sousa’s serve.

He earned a standing ovation from parts of the crowd after setting up one of those break points, ending a 20-shot rally with a running backhand cross-court winner to make it 30-40 at 1-1 in the third set. He hit another backhand winner to secure the break and broke again for a 5-2 lead.

It was the two-time Wimbledon champion’s 52nd match win at the All England Club, surpassing Bjorn Borg for eighth place on the all-time list.

Serena Williams eased into the Wimbledon quarterfinals for the 14th time by beating Carla Suarez Navarro 6-2, 6-2 on No. 1 Court.

Williams won six straight games from 3-2 in the first set to take control of the match. She raised both arms in celebration after her fifth break of the match gave her a 5-2 lead in the second set and served out the victory when Suarez Navarro sent a backhand wide.

Williams is looking for her eighth Wimbledon title after losing last year’s final to Angelique Kerber. She has never lost a set in seven career meetings against Suarez Navarro.

Unseeded American Alison Riske came from a set down to upset top-ranked Ash Barty 3-6, 6-2, 6-3 at Wimbledon and reach her first Grand Slam quarterfinal.

Riske broke for a 5-3 lead in the deciding set and clinched the win on her first match point when Barty sent a backhand wide.

The loss ends a 15-match winning streak for Barty, who was coming off titles at the French Open and Birmingham and was playing her first tournament as No. 1.

Barty opened the match with four straight aces but landed only 40 percent of her first serves in the second set and was broken four times in total.

Riske is playing in her 30th Grand Slam tournament but her previous best result was reaching the fourth round at the 2013 U.S. Open.

She will next face either Serena Williams or Carla Suarez Navarro.

Play is under way on the busiest day in Grand Slam tennis: Wimbledon’s so-called “Manic Monday.”

No. 1 Ash Barty is in action against 55th-ranked American Alison Riske on No. 2 Court in one of four women’s singles matches currently in progress.

All 16 men’s and women’s fourth-round matches are on the program to begin Week 2. This is the only major tournament that schedules the middle Sunday off — and then the only one to play every singles match the following day.

The head of the All England Club thinks top-10 player Fabio Fognini could be given a “small fine” for saying during his third-round loss that he wished a bomb would hit Wimbledon.

Chief executive Richard Lewis called what Fognini said “a very unfortunate comment” but also “one of those heat-of-the-moment comments.”

Still, Lewis said, “it wouldn’t surprise me if in the end there’s a small fine.”

More than 1,000 bombs fell in the area during World War II, destroying thousands of nearby homes, and 16 fell on the tournament grounds. One hit Centre Court.

A star-filled cast that includes Serena Williams, 15-year-old sensation Coco Gauff and the men’s Big Three of Roger Federer, Rafael Nadal and Novak Djokovic is on the schedule as Wimbledon resumes after its traditional day off.

All 16 men’s and women’s fourth-round singles matches are planned for “Manic Monday,” as it’s known.

The All England Club is the only Grand Slam site where there is no play planned for the tournament’s middle Sunday — and the only one where everyone still around plays on the initial day of Week 2.

Gauff will try to prolong her magical Grand Slam debut when she meets former No. 1 Simona Halep. That match on Court No. 1 follows seven-time Wimbledon champion Williams against No. 30 seed Carla Suarez Navarro.

The top three seeded men — Djokovic, Federer and Nadal — all face opponents who never have been to the second week at Wimbledon.

Mon Jul 8 , 2019
Packing worker Hashmat Zubair fills a delivery box with products at the Amazon fulfillment center in Baltimore, Maryland, April 30, 2019. R Clodagh Kilcoyne | Reuters Amazon employees in Minnesota are reportedly planning a strike on Prime Day this year, as the company is promoting its faster delivery options but […]