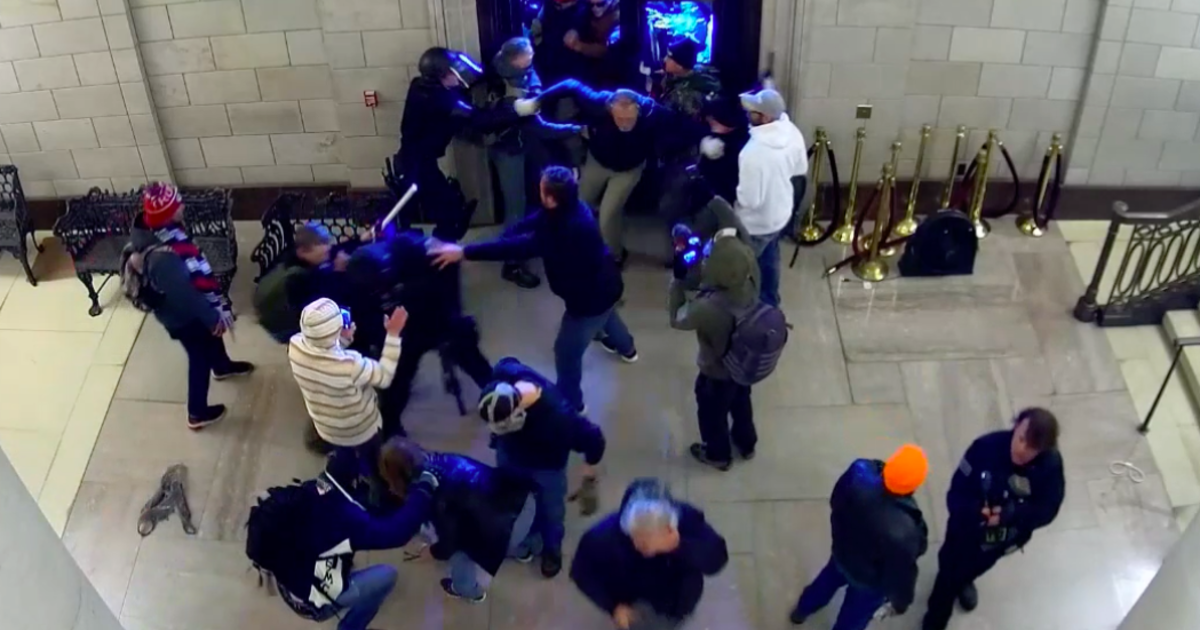 Delegate Stacey Plaskett of the U.S. Virgin Islands highlighted previous acts from Mr. Trump’s supporters who then traveled to Washington on January 6, arguing the former president was aware of the violence he was inciting with his rhetoric about the election.

“Truth and facts are overwhelming that our president, the president of the United States, incited a mob to storm the Capitol, the attempt to stop the certification of a presidential election,” Plaskett said.

Like other managers before her, Plaskett declared the violence perpetrated by Mr. Trump’s was foreseeable given the former president’s conduct in the months, weeks and days before the assault, and previous incidents of violence from groups who attended the riots.

“The violence that occured on January 6, like the attack itself, did not just appear,” she said.

Plaskett noted by the time of the assault January 6, Mr. Trump “had every reason to know that they were armed, that they were violent and that they would actually fight. He knew who he was calling and the violence they were capable of.”

She also stressed that rather than calling off his supporters, Mr. Trump “fanned the flame of violence and it worked.”

Focusing on the Proud Boys, a far-right group, Plaskett highlighted its members’ histories of violence and played footage from the September 29 presidential debate, during which Mr. Trump told the Proud Boys to “stand back and stand by” when asked to condemn them. The Proud Boys then sold merchandise bearing the phrase.

She also recalled an October incident in Texas in which a caravan of Mr. Trump’s supporters surrounded a Biden-Harris campaign bus filled with staff and volunteers in an attempt to run it off the road. Mr. Trump shared a video of the incident on Twitter, stating “I LOVE TEXAS!”

“For anyone who says Donald Trump didn’t know the violence he was inciting, I ask you to consider his supporters tried to drive a bus off the highway in the middle of the day to intimidate his opponent’s campaign workers,” Plaskett said, adding he called those supporters who participated in the caravan “patriots.”

Plaskett said the organizer of the caravan in Texas was involved in the January 6 rally near the White House and was among those who breached the Capitol, making his way to the Rotunda before urging the crowd to go inside.

“These are the people that President Trump cultivated, who were standing by,” she said.

Plaskett said those who were involved in earlier Trump campaign events were brought back to assist with planning the January 6 rally, and Mr. Trump himself played a role.

“Donald Trump, over many months, cultivated violence, praised it and then when he saw the violence his supporters were capable of, he channeled it to his big, wild, historic event,” she said. “He organized January 6 with the same people that had just organized a rally resulting in substantial violence and made absolutely sure this time these violent rally-goers wouldn’t just remain in place. He made sure that those violent people would literally march right here, to our steps, from the Ellipse to the Capitol, to stop the steal. His cavalry. This was deliberate.”

Plaskett said Mr. Trump and his team monitored public forums where posts alluded to violence at the U.S. Capitol on January 6, and she showed photos of Proud Boys members inside the building wearing ear pieces and using walkie-talkies to better coordinate with one another.

“The exact thing that happened on January 6, that was their goal. And they said it out loud on sites that the Trump administration was actively monitoring,” she said.

She also cited a Washington Post article on a FBI report warning of “war” at the Capitol, as well as a warning from D.C. Mayor Muriel Bowser for residents to stay away from the area and arrests made before the riots.

“This is all in public view. All of it,” Plaskett said. “The truth is usually seen and rarely heard. Truth is truth whether denied or not, and the truth is President Trump had spent months calling his supporters to a march on a specific day at a specific time in specific places to stop the certification. And leading up to the event, there were hundreds, hundreds of posts online showing that his supporters took this as a call to arms to attack the Capitol.”

Plaskett added that rather than seeking to quell the violence in the face of these warnings, Mr. Trump instead appeared before his supporters and urged them to “fight like hell or you’re not going to have a country anymore.”

Thu Feb 11 , 2021
U.S. drug maker Emergent BioSolutions began speeding up its acquisition of drug supplies beginning early last year, as the coronavirus outbreak was erupting in China. In addition to producing drugs like the opioid overdose-reversing Narcan nasal spray, the firm develops vaccines and antibody therapeutics and had scored lucrative contracts for […]