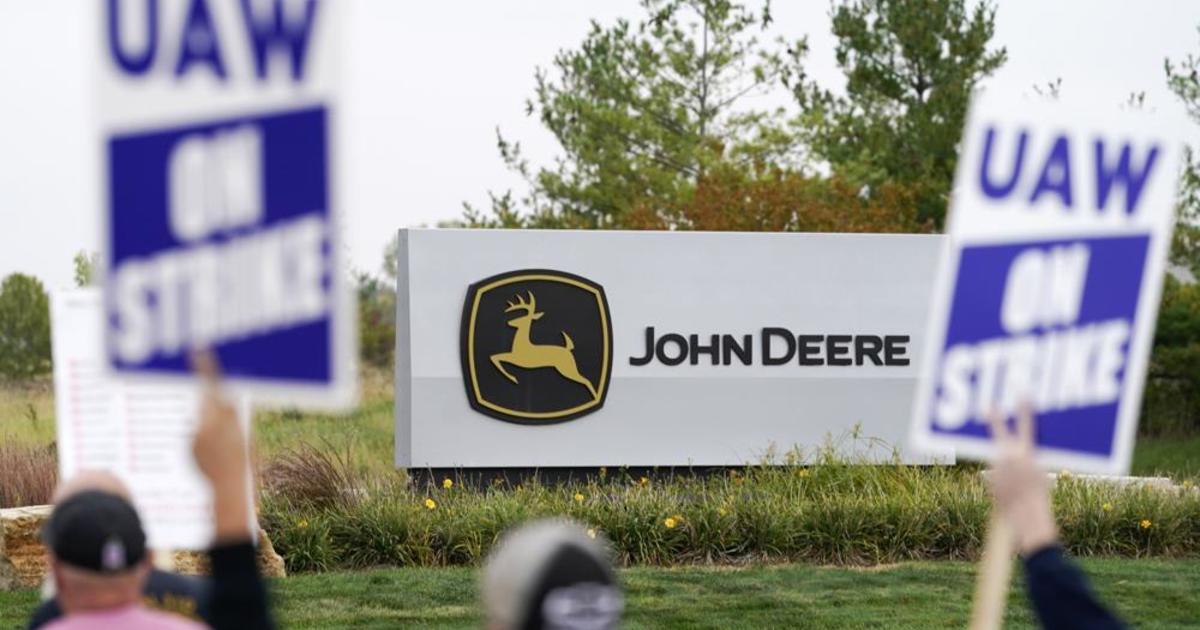 Howze declined to discuss how much the ongoing strike is costing Deere, which will release its next earnings report later this month. The disputed contract would cover more than 10,000 Deere workers at 12 facilities in Iowa, Illinois and Kansas, who make the company’s iconic John Deere green tractors and other equipment.

The company plans to reach out to employees directly now to stress the virtues of its offer while it tries to keep its plants running with salaried employees and other workers to meet customer commitments. Other Deere plants globally are also working to pick up the slack.

In addition to the initial raises, this week’s offer included 5% raises in the third and fifth years of the six-year deal, and it would have provided an $8,500 ratification bonus, preserved a pension option for new employees, made workers eligible for health insurance sooner and maintained their no-premium health insurance coverage.

UAW spokesman Brian Rothenberg said union leaders were meeting to discuss their next moves. With a majority of workers voting against the latest offer, union officials face demands to deliver more but that might be difficult given the Moline, Illinois-based company’s stance. And pressure to reach a settlement will mount the longer workers go without pay.

The vote Tuesday was much closer than when 90% of the workers rejected the company’s first offer last month, but 55% of the workers still rejected the latest offer. Workers have been encouraged to seek more now because of the current worker shortages and Deere’s strong profits.

“It seems general membership feels emboldened by this current political moment of labor power. They’re pushing things further than the union leadership apparently wants to go,” said Victor Chen, a sociologist at Virginia Commonwealth University who studies labor. “It’s a gamble, but the economic wind is against their backs, given widespread supply chain problems and the current worker shortage.”

Deere officials, who have predicted that the company will report record profits of between $5.7 billion and $5.9 billion this fiscal year, don’t want to miss out on sales to farmers who are ready to buy thanks to strong crop prices. The U.S. Department of Agriculture predicts that farmers’ net income will increase by nearly 20% this year, to $113 billion.

Observers say the rejection of the deal shows pent-up anger among Deere workers over how much of its profits the company has been willing to share with workers.

“Although the proposed contract was a significant improvement over the previous offer, the Deere workers evidently felt that the company could afford more,” Fordham University sociologist Chris Rhomberg said. “For decades, wages across the economy have lagged behind productivity growth, and workers may be tired of seeing the gains from their efforts go predominantly to corporations making record-breaking earnings.”

The strike at Deere & Co. comes amid a pandemic-era reckoning on wages and working conditions by employees across the U.S. In October, 1,400 workers walked off the job at Kellogg Co.’s U.S. cereal plants. The strike ended that same month when workers ratified a new contract.

Earlier this summer, more than 600 workers at a Frito-Lay plant in Topeka, Kansas, walked off the job to protest working conditions during the pandemic, including what they called forced overtime. That strike ended in July when workers ratified a new contract.

The challenge for the UAW and Deere will be finding a way to resolve their differences in a way that workers will accept, said Todd Vachon, a former member of a carpenter’s union who now teaches about labor relations at Rutgers University.

“There is always the risk of overplaying one’s hand — on both sides, really,” Vachon said. “It appears the final mile will likely involve some changes to work rules and working conditions in addition to just wage increases.”

The longer the strike continues, the more painful it will become for everyone, Creighton University economist Ernie Goss said.

“During the dragging on, both sides lose,” Goss said. “Workers are looking at lost income. John Deere is looking at lost sales. So they both have sort of guns pointing at each other’s heads, economically speaking.”

Virginia: What was behind the shift of White women toward the GOP?

Fri Nov 5 , 2021
In the Virginia race for governor, exit polls showed a big shift among White women voters, a group that made up more than a third of the state’s electorate.  In 2020, they roughly split their votes for president, but this year, they backed the Republican candidate for governor by 14 […]