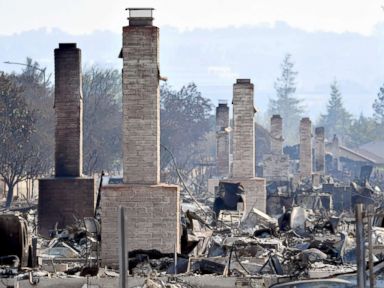 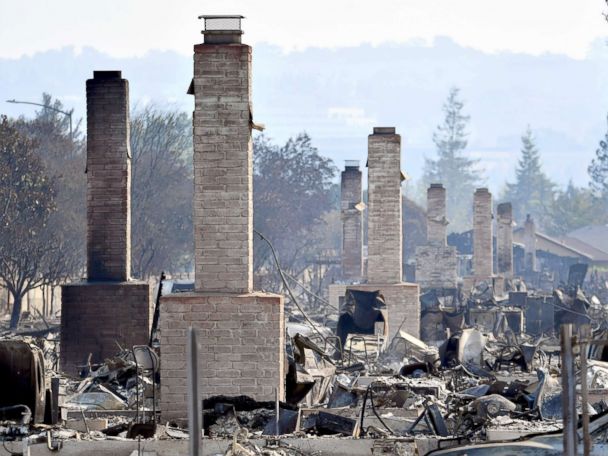 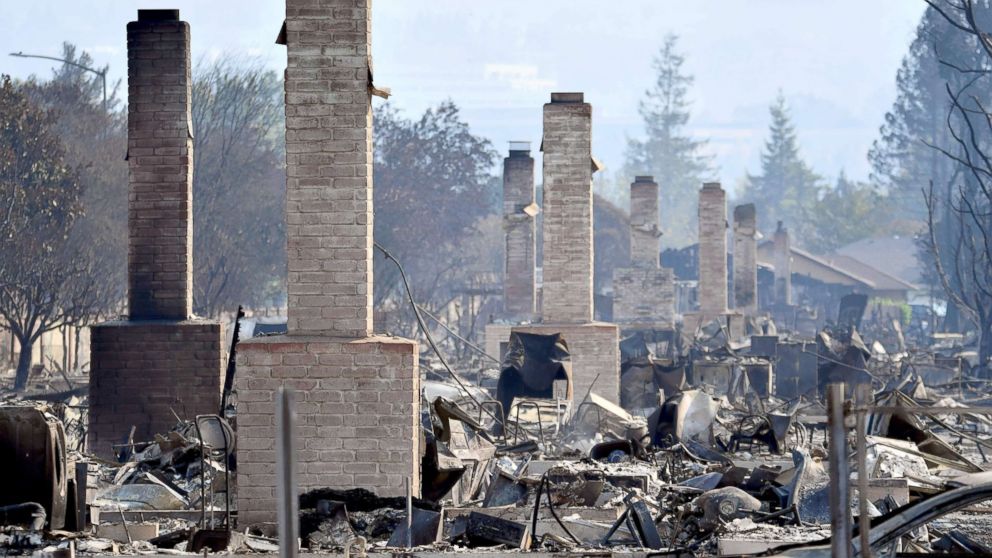 Firefighters are facing dry and windy conditions as they battle California’s deadliest wildfires that authorities say have killed at least 34 people, left hundreds missing and devastated entire neighborhoods in California.

Intensified by strong winds and low humidity, the 17 wildfires as of today have charred more than 221,754 acres of land, forced more than 20,000 residents to evacuate and damaged or destroyed at least 5,700 homes and other structures, according to the California Department of Forestry and Fire Protection.

The decreased number of blazes from 21 Thursday reflects the merging of several fires while three have been completely contained.

Santa Rosa, a city in Sonoma County known for its wineries, was among the hardest hit areas, with at least 2,834 homes destroyed. Critical infrastructure was also lost in the flames, including the city’s fire station, Santa Rosa Mayor Chris Coursey said at a news conference Thursday afternoon.

A total of 3,900 people are being housed in 43 shelters, said Mark Ghilarducci, director of California Governor’s Office of Emergency Services.

The cause of the fires is still under investigation. But, officials believe that significant progress has been made in the last 24 hours.

More than half the deaths from the fires occurred in Sonoma County alone, authorities said. Taken together, the death toll exceeds the number of fatalities in the 1933 Griffith Park Fire in Los Angeles, the deadliest wildfire in California’s history, killing 29.

“We have a subscription service where we can alert our residents, and we did that right away, trying to notify everybody where the fire was, where it was going and how fast it was going, and I think it saved a lot of lives,” Sonoma County Sheriff’s Sgt. Spencer Crum told ABC News in an interview Tuesday.

About 250 people, most of whom are elderly, were unaccounted for in Sonoma County as of Thursday night, according to the sheriff’s office. Out of 1,308 missing person reports that have been filed since the fires began, about 1,052 people have been safely located. The sheriff’s office said some of the reports may be duplicates.

With mandatory evacuation orders and road closures still underway, many residents in the affected areas have been warned not to return to their homes until further notice.

While overall containment of the flames has increased, a large weather system moving into the region today will bring another round of gusty winds and low humidity to the state over the weekend. Gusts could reach up to 60 mph in some areas late tonight into Saturday, while daytime humidity could be as low as 10 percent.

Red flag warnings for gusty winds and low humidity remain in effect across the fire areas and much of northern California and parts of Southern California due to the dry air and more than 40 mph winds. The conditions will challenge the more than 9,000 firefighters working to snuff out the flames and prevent new wildfires from igniting.

With firefighters stretched thin throughout the state, hundreds of additional fire engines and personnel have been requested from other states to help relieve crews on the front lines and be prepared for the possibility of more blazes, according to the California Department of Forestry and Fire Protection.

Most of the flames ignited on the night of Oct. 8 or during the early morning hours of Oct. 9.

Here’s a roundup of the largest fires still threatening California:

The so-called Tubbs, Pocket, Nuns/Adobe/Norbbom, Pressley fires are considered branches of one giant inferno — collectively known as the Central LNU Complex — in Napa and Sonoma counties. Nearly 34,000 structures are threatened, according to the California Department of Forestry and Fire Protection.

Altogether, the four fires have destroyed 1,063 structures and damaged 48 others.

The Atlas and Patrick fires make up another huge blaze, known as the Southern LNU Complex, in Napa and Solano counties that collectively threatens 5,000 structures, according to the California Department of Forestry and Fire Protection.

Altogether, the two fires have destroyed 181 structures and damaged 27 others.

The Redwood/Potter fires and the Sulphur fire make up a giant blaze, known as the Mendocino Lake Complex, in Lake and Mendocino counties that collectively threatens 1,000 structures, according to the California Department of Forestry and Fire Protection.

Altogether, the two fires have destroyed 369 structures and damaged another 43.

The Cascade, La Porte, Lobo and McCourtney fires make up one huge blaze in Butte, Nevada and Yuba counties, collectively known as the Wind Complex, according to the California Department of Forestry and Fire Protection.

Altogether, the four fires have destroyed 366 structures and damaged 13 others.

Euro zone bailout fund may get monitoring powers next year