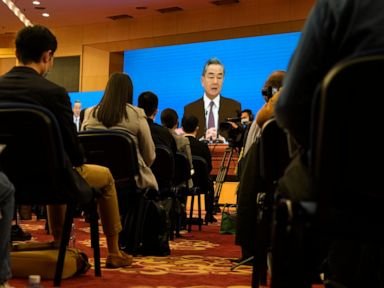 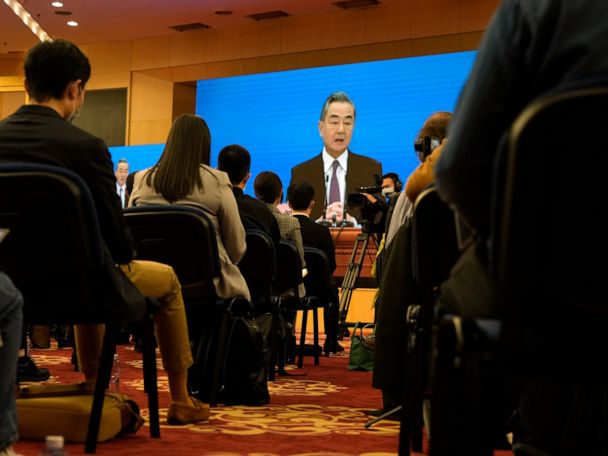 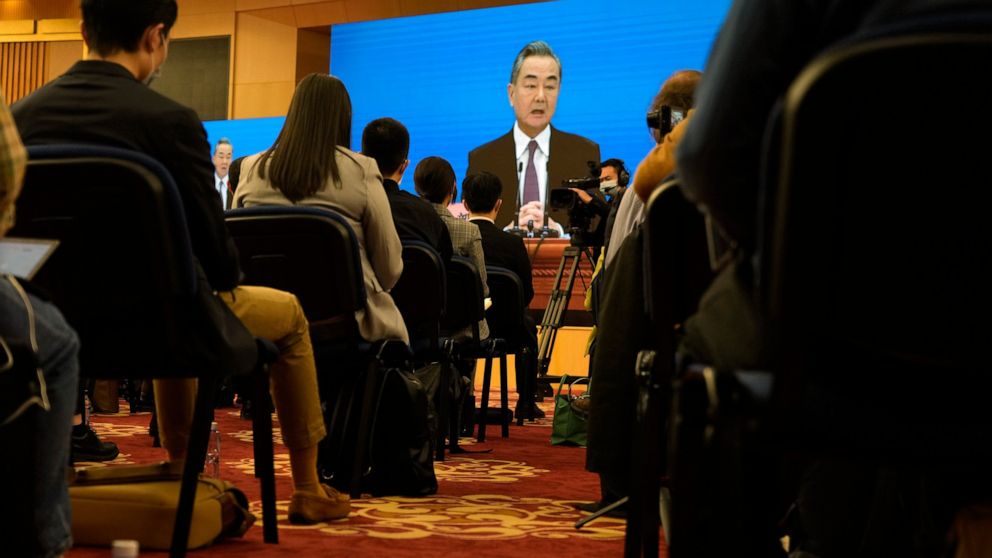 Wang Yi said ties with Moscow constituted “one of the most crucial bilateral relationships in the world.”

China has broken with the U.S., Europe and others that have imposed sanctions on Russia after its invasion of Ukraine. Beijing has said sanctions create new issues and threaten a political settlement of the conflict.

“No matter how perilous the international landscape, we will maintain our strategic focus and promote the development of a comprehensive China-Russia partnership in the new era,” Wang told reporters at a news conference on the sidelines of the annual meeting of China’s ceremonial parliament.

“The friendship between the two peoples is iron clad,” he added.

Much attention has been paid to a meeting between Chinese leader Xi Jinping and President Vladimir Putin in Beijing on Feb. 4, after which a joint statement was issued affirming “strong mutual support for the protection of their core interests.”

Russia endorsed China’s view of self-governing Taiwan as an “inalienable part of China, and opposes any forms of independence of Taiwan,” while China backed Russia in opposing the further enlargement of NATO.

Russia’s invasion of Ukraine has drawn comparisons to China’s own threat to invade Taiwan in order to bring what it considers a wayward province under its control.

However, Wang said Taiwan was a “fundamentally different” issue from Ukraine because the island is “an inalienable part of China’s territory.”

“Some people, while being vocal about the principle of sovereignty on the Ukraine issue, have kept undermining China’s sovereignty and territorial integrity on the Taiwan question. This is a blatant double standards,” Wang said in a less-than-subtle dig at Taiwan’s ally, the U.S.

China and Russia have increasingly aligned their foreign policies against the liberal Western order and their militaries have carried out exercises together and flown joint air patrols, as their relationship has taken on the trappings of an informal alliance.

Xi’s government has refused to criticize the Russian invasion but tried to distance itself from Putin’s war by calling for dialogue and the respect of national sovereignty. That prompted suggestions Putin failed to tell the Chinese leader his plans before their February statement.

Along with denouncing trade and financial sanctions on Moscow, Beijing says Washington is to blame for the conflict for failing to take Russia’s security concerns into consideration.

During an hour-long phone conversation with U.S. Secretary of State Antony Blinken on Saturday, Wang said China opposes any moves that “add fuel to the flames” in Ukraine.

Wang called for negotiations to resolve the immediate crisis, as well as talks on creating a balanced European security mechanism. He said the U.S. and Europe should pay attention to the negative impact of NATO’s eastward expansion on Russia’s security.

On a visit to the Lithuanian capital of Vilnius on Monday, Blinken said China’s actions were at odds with its avowed support for stability and “respecting sovereignty.”

Blinken was speaking at a joint news conference with his Lithuanian counterpart, whose country has come under severe economic pressure from Beijing after it agreed to allow Taiwan to open a de-facto embassy in Vilnius

“From its coercion of Vilnius to its failure thus far to condemn Moscow’s flagrant violation of the sovereignty and territorial integrity of Ukraine today and in 2014, Beijing’s actions are speaking much louder than its words,“ he said, referring to Russia’s earlier annexation of Crimea.

Chinese state-controlled media outlets have been told to post only pro-Russian content and to censor anti-Russian or pro-Western views, according to a copy of instructions that appeared on the social media account of the newspaper Beijing News. The post was later deleted.

On Friday, a translation by state TV of remarks by the head of the International Paralympic Committee during the opening ceremony of the Beijing Winter Paralympics skipped portions that expressed horror about the war in Ukraine and called for peace.

Online and in Chinese social media, expressions of sympathy for Ukraine and support for Russia appear but not criticism of Moscow.

The state-run newspaper Capital News appeared to support Putin’s demand that Ukraine become a neutral buffer between Russia and Europe and give up the possibility of NATO membership.

“Ukraine should be a bridge between East and West, rather than a frontier of confrontation between major powers,” Capital News said.

The most senior Chinese leaders have avoided mentioning the war in public.

On Saturday, Premier Li Keqiang, the No. 2 leader, indirectly acknowledged its impact, saying prices of oil, wheat and other commodities are high and “prone to fluctuation,” but gave no indication why.

Mon Mar 7 , 2022
Automatically saving a percentage of your salary can be an easy way to save for your retirement. As a rule of thumb, most financial advisors suggest you save 10% to 15% of your earnings. Here’s a case study assuming you start with no savings, plan to retire at 65 and […]