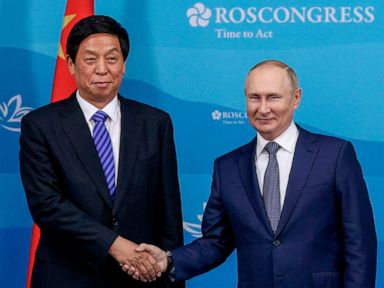 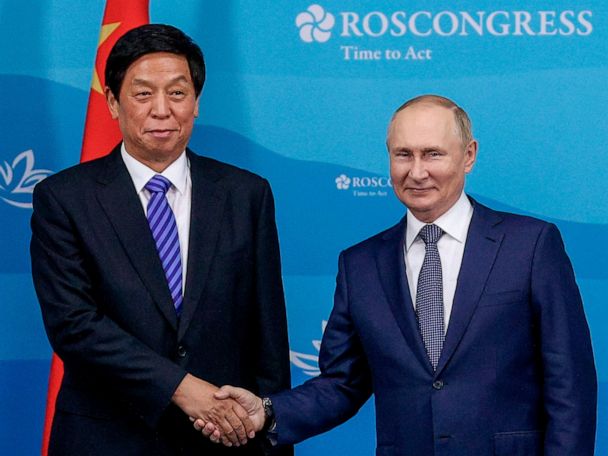 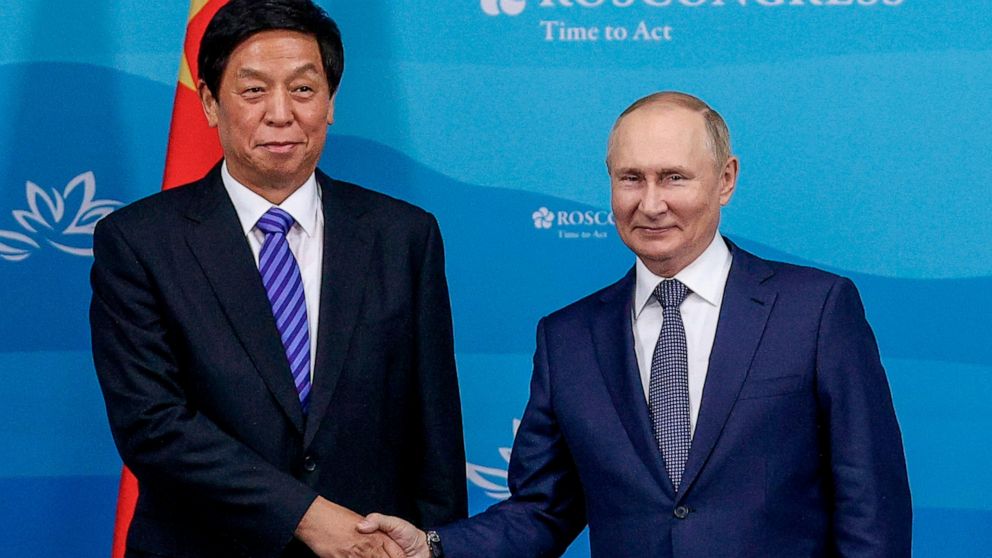 BEIJING — Chinese state media say the country’s top legislator decried sanctions against Russia during a recent visit to the country, underscoring China‘s backing of Moscow in its war on Ukraine despite claims of neutrality.

The official Xinhua News Agency said Li Zhanshu urged greater cooperation on “fighting against external interference, sanctions and long-arm jurisdiction, among others,” in a meeting with Russian lawmakers Thursday.

Li also held talks with Russian President Vladimir Putin ahead of an expected meeting this month between Putin and Chinese President Xi Jinping at a regional gathering in Uzbekistan. That would mark Xi’s first trip outside China since the pandemic began in early 2020.

Li is a member of the Communist Party’s all-powerful Politburo Standing Committee and is considered one of Xi’s closest confidants, the two having worked together for decades. Ranked third in the Communist Party hierarchy, Li is the highest-level official to travel abroad since the start of the pandemic.

The meeting at the Shanghai Cooperation Organization — a political, economic and security forum that China and Russia dominate — comes as Putin faces setbacks in his attempt to conquer Ukraine and Xi prepares for a congress of the ruling Communist Party that is expected to grant him a third five-year term as leader.

“Li thanked the Russian side for firmly supporting China on the Taiwan question,” Xinhua reported.

Russia has also backed China against international criticism, including at the United Nations, over its mass incarceration of Uyghurs and other Muslim minorities.

The world’s two leading authoritarian states, China and Russia have increasingly aligned their foreign policies against the U.S. and other liberal democracies. Weeks before Russia invaded Ukraine, Xi hosted Putin in Beijing in early February, during which the sides issued a joint statement declaring, “Friendship between the two States has no limits, there are no ‘forbidden’ areas of cooperation.”

In that statement, Russia also said it “confirms that Taiwan is an inalienable part of China, and opposes any forms of independence of Taiwan.”

China has steadfastly refused to criticize Russia’s invasion of Ukraine or even to refer to it as such, and has accused the U.S. and NATO of provoking the conflict, despite Putin’s statements that he regards Ukraine as a historical part of Russia that must be eliminated as an independent political entity.

Although condemning the punishing economic sanctions against Russia, Beijing has not provided military or financial support to Moscow that could trigger legal action from Washington against its companies.

Russia held sweeping military drills that ended last week in the country’s east, involving forces from China in another show of increasingly close ties between the two.

Xinhua said Li met with Putin in the far-eastern port city of Vladivostok, and with Russian Federation Council Speaker Valentina Matviyenko and Vyacheslav Volodin, chairman of the Russian State Duma, in Moscow on a visit that ran from Wednesday to Saturday.

Sun Sep 11 , 2022
Check out what’s clicking on FoxBusiness.com Warren Buffett’s Berkshire Hathaway continues to collect shares of Occidental Petroleum in 2022. Buffett’s conglomerate raised its stake in the company to 26.8% from 20.2%, according to Bloomberg. The latest purchase comes after US regulators gave Berkshire the go-ahead last month to buy as […]