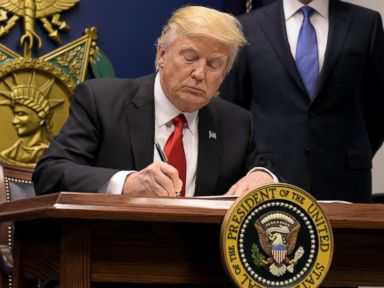 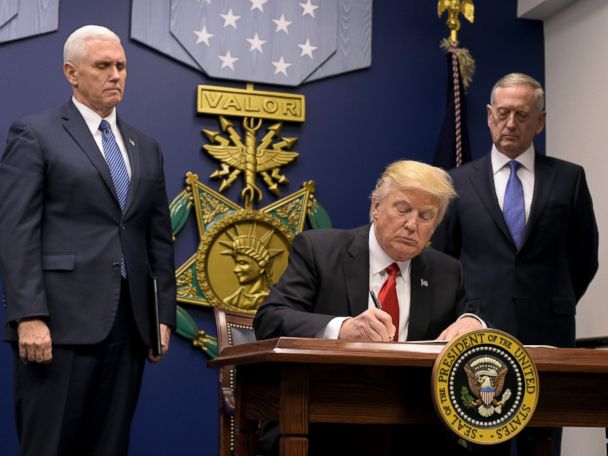 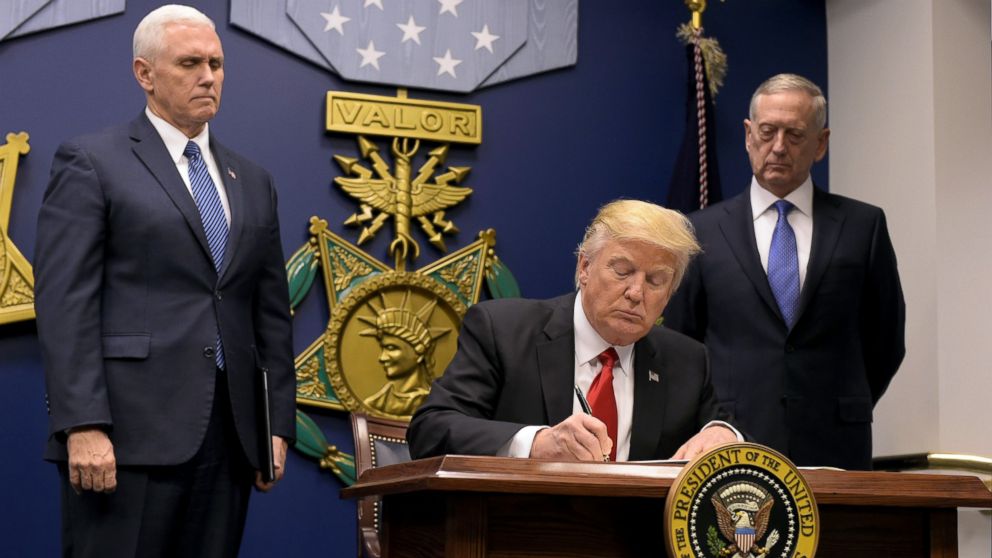 Since his first week in office, President Donald Trump has tried to put in place extensive restrictions on who can come into the country, fulfilling a campaign promise to implement “extreme vetting” or a “total and complete shutdown of Muslims entering the United States.”

“I got elected on defense of our country. I keep my campaign promises, and our citizens will be very happy when they see the result,” Trump said in February.

But through three executive orders now, that promise has been slapped down and tied up by federal courts — with the latest version put on hold by a federal judge in Hawaii Tuesday.

The Justice Department has said it will appeal the decision, but the judge who issued the temporary restraining order cited the same arguments previous courts have had with the first two bans. It’s unclear if the Trump administration has done enough legal maneuvering this time to avoid those, but it’s worth looking back on the judicial road that led here.

One week into his term, Trump visited the Pentagon and, flanked by Vice President Mike Pence and Defense Secretary James Mattis, signed an executive order titled “Protecting the Nation from Foreign Terrorist Entry into the United States.” Its implementation was effective immediately because the threat was so urgent, according to administration officials, but so few people outside the White House even knew the contents of it.

The result was chaos at airports across the country, where confused Customs and Border Protection agents were detaining folks with legal immigration papers and angry protesters chanted for their release — a tumultuous scene that delighted then-White House chief strategist Steve Bannon, according to Bloomberg.

The order itself banned all citizens from seven Muslim-majority countries — Iran, Iraq, Syria, Yemen, Libya, Somalia and Sudan — for 90 days and all refugees for 120 days, while ordering the Departments of State, Defense and Homeland Security to review the vetting procedures for all immigration and refugee admissions. When refugee admissions would resume, it called for the State Department to prioritize religious minorities like Christians in the Middle East and indefinitely ban all Syrian refugees.

As swiftly as the executive order came, there were court decisions in New York and Boston blocking all or parts of it, and shortly after that, several states sued to block the executive order as well, including Virginia, Hawaii, Washington and Minnesota.

The real halt came one week after Trump’s Pentagon signing ceremony when a district court judge in Seattle froze the ban nationwide with what’s known as a temporary restraining order. Judge James Robart was ruling on one of those lawsuits, this one by Washington and Minnesota, and Trump began lashing out at him on Twitter, writing, “If something happens blame him and court system. People pouring in. Bad!”

In addition to the president’s dire rhetoric, the ruling was appealed by his administration and sent to the next highest court, the Ninth Circuit Court of Appeals, which covers the western United States. Sixteen states joined Washington and Minnesota, filing what’s called an amicus brief in support of their suit.

In dramatic fashion, audio of the case’s oral arguments were broadcast live on cable television Feb. 7, and two days later, the Ninth Circuit ruled unanimously in favor of the plaintiffs and kept the block of Trump’s travel ban in place.

There was some back-and-forth in the courts about how the case would proceed — until the Trump administration voluntarily withdrew after signing a new travel ban.

This second ban was limited to six Muslim-majority countries, taking Iraq off the list. It also exempted legal permanent residents and anyone who already had a valid visa, which the original didn’t do initially. And it excised the permanent ban on Syrian refugees, but kept in place the 120-day suspension of all refugee admissions.

Two days after its unveiling, another state — this time, Hawaii — sued to bar its implementation, arguing that the executive order “began life as a Muslim ban,” was “infected with the same legal problems as the first order —- undermining bedrock constitutional and statutory guarantees,” and was “motivated by animus and a desire to discriminate on the basis of religion and/or national origin, nationality, or alienage.”

A district court judge agreed with that argument, granting another temporary restraining order one week later, this time before the ban could be implemented. Speaking at a rally in Nashville the same day, Trump called the ruling an “unprecedented judicial overreach,” although he referred to the second ban as “a watered-down version of the first one” — bolstering the argument of his opponents who said the ban was illegal because it was essentially the same as the first one.

Fifteen days after that, the Trump administration appealed again to the Ninth Circuit, but other federal courts across the country had also ruled against the ban. One of those other cases went up to the Court of Appeals, this time in the Fourth Circuit that covers the mid-Atlantic from South Carolina to Maryland.

The Fourth Circuit, by a vote of 10-3, blocked the travel restrictions for the six Muslim-majority countries, but left in place the 120-day refugee ban. Citing comments by candidate-Trump and his political surrogates about Muslims and Islam, the court ruled the new ban still “drips with religious intolerance, animus, and discrimination” and was an expression of “President Trump’s desire to exclude Muslims from the United States.”

In the days afterward, as his administration tried to paint the order as a limited pause for national security, Trump again undercut the message by tweeting, “People, the lawyers and the courts can call it whatever they want, but I am calling it what we need and what it is, a TRAVEL BAN!” and bashing the judiciary branch as “slow and political.”

Meanwhile, his administration asked the highest court in the U.S., the Supreme Court, to weigh.

The Supreme Court agreed to take the case up in full in October — and in the meantime, overruled lower courts by allowing a limited travel ban to go into effect. The Trump administration hailed it as a victory, but the ruling ended up causing more headaches.

Instead of full implementation, the Supreme Court ruled that the 90-day ban on citizens from Iran, Somalia, Yemen, Libya, Sudan and Syria and the 120-day ban on all refugees could begin — except for those who could prove a “bona fide” relationship to a person or entity in the U.S. The Court provided a vague description of what “bona fide” meant, setting off a new legal war.

Days later, the administration said its lawyers determined a parent (including parent-in-law), spouse, fiancé, child, adult son or daughter, son-in-law, daughter-in-law, sibling, whether whole or half, and including step relationships, qualified — and the ban went into effect on June 29. Once again, a state sued to challenge — with Hawaii claiming the categories were arbitrary and asking why grandparents or grandchildren, for example, weren’t included — and won.

On July 19, the Supreme Court ruled in Hawaii’s favor and expanded the definition to include grandparents and grandchildren, aunts and uncles, and cousins.

In September, the Ninth Circuit ruled that refugees with a formal assurance from a resettlement organization in the U.S. counted as a bona fide relationship, but on Sept. 12, the Supreme Court overruled them again and allowed the stricter ban on refugees to remain in place.

After the second ban expired on Sept. 24, the Supreme Court dismissed the case, ruling on Oct. 10 that it no longer needed to issue a decision because “the appeal no longer presents a ‘live case or controversy.'”

While the drama of the second travel ban was working its way through the court system, the Trump administration filed a little-noticed order that led to what’s been called the third travel ban.

On July 12, the State Department issued a cable to posts around the world obtained by ABC News — notifying them that the administration had set new standards on information sharing for all countries in order to obtain U.S. visas or other entry to the U.S. and asking countries to meet them, create a plan to meet them, or face travel sanctions if they don’t.

That exchange between U.S. diplomats and foreign countries played out, and the administration came up with a list of 47 countries who had insufficient systems. After informing them, that list was narrowed down to just seven, and on Sept. 24 — just as the second ban was about to expire — the administration issued a new proclamation that barred travel from them indefinitely.

Iran, Syria, Somalia, Libya — all part of the original bans — were listed, and the administration added Chad, North Korea and Venezuela.

These new conditions-based restrictions meant countries could be added or removed, depending on whether they complied with the new U.S. standards, and allowed for case-by-case waivers for individuals — steps meant to inoculate the administration from legal challenges.

A key counterterror ally who has been cooperating with the U.S. against ISIS, Boko Haram, and others, Chad’s addition was seen by many foreign policy experts as a grave error. Since then, the White House says National Security Advisor H.R. McMaster has spoken to Chadian president Idriss Deby Itno about how to work together “to address the deficiencies, toward the goal of improving vetting capabilities and lifting visa restrictions.”

So far, that hasn’t worked.

One day before new restrictions were to take effect, a district court judge in Hawaii issued a new temporary restraining order, arguing the proclamation “plainly discriminates based on nationality in the manner that the Ninth Circuit” previously found unconstitutional.

It also “suffers from precisely the same maladies as its predecessor: It lacks sufficient findings that the entry of more than 150 million nationals from six specified countries would be ‘detrimental to the interests of the United States,'” the judge wrote.

The plaintiff in this latest case, the state of Hawaii, didn’t seek to block the bans on North Korea or Venezuela, so those restrictions have gone into effect. But the State Department said Tuesday that diplomatic posts in the other five Muslim-majority nations will resume visa issuances.

On the same day, a district court in Maryland also enjoined, or blocked, the third travel ban — calling it “the latest incarnation of the ‘Muslim ban’ originally promised by Trump as a candidate for the presidency” and calling it a violation of the U.S. constitution’s guarantee of freedom of religion.

Attorney General Jeff Sessions said the White House will fight the ruling, telling Congress on Oct. 18, “We’re confident that we’ll prevail as time goes by in the Supreme Court.” The next step would be to once again file an appeal with the Ninth Circuit — where the administration has lost twice before.

Thu Oct 19 , 2017
GRAND RAPIDS, Mich. –  Helen J. DeVos, a philanthropist from western Michigan known for her support of children’s health, Christian education and the arts, has died at age 90. Continue Reading Below Her family says in a statement that she died Wednesday of complications from a stroke following a recent […]