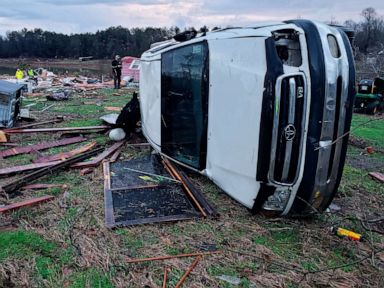 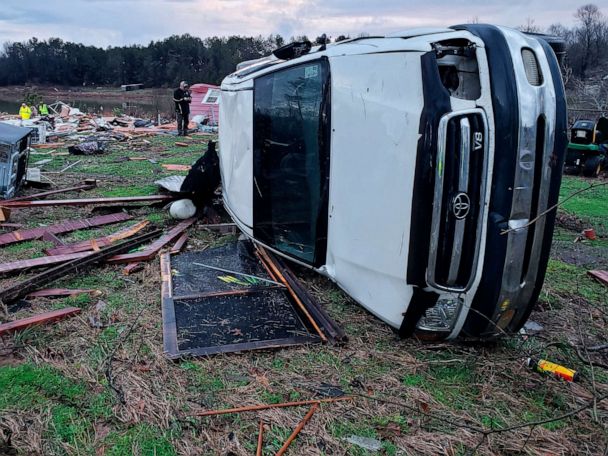 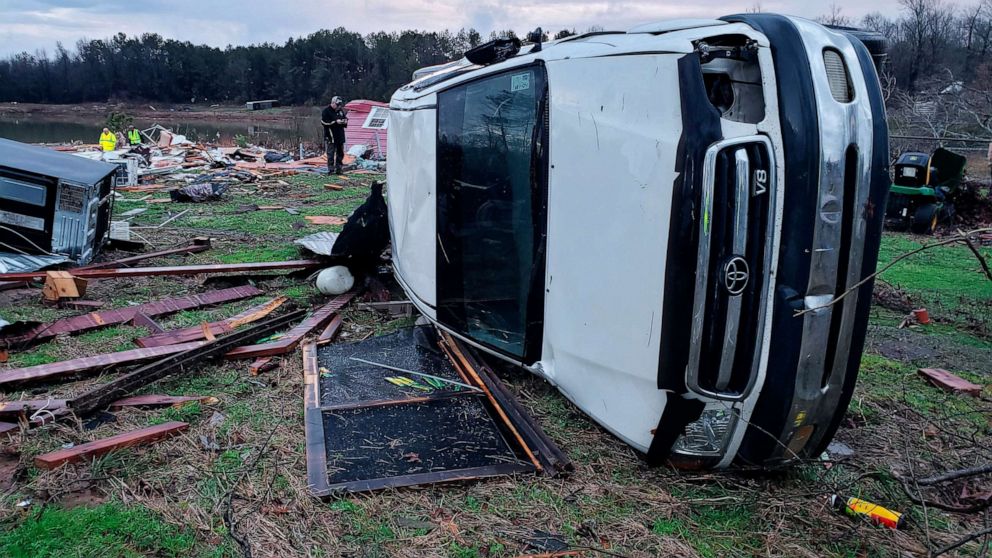 The main threats are damaging winds, large hail, flooding and a few tornadoes.

Severe weather is making its way throughout the country, leaving millions at risk and at least eight already dead, according to officials.

The main threats hitting central and southern parts of the U.S. are damaging winds, large hail, snow, flooding and a few tornadoes in Texas, Louisiana, Oklahoma, Arkansas and Missouri.

The fatalities were reported in Alabama, Louisiana, and Texas.

The National Weather Service in Birmingham, Alabama, confirmed that three deaths occurred in Pickens County, according to its Twitter page.

In Nacogdoches County, Texas, a 44-year-old man was killed after a tree fell across a home, according to authorities. The man was identified as Larry Hadnot, Jr. He was pronounced dead at the scene.

Another person died in Dallas when their car flipped into a creek west of downtown Dallas, according to police.

Strong storms and heavy rains will make their way east throughout the day, impacting states from Texas to Maine.

Ice and sleet will be a threat for some areas of the Great Lakes — namely Michigan, where a significant icing event is expected.

Up to 12 inches of snow is expected in parts of the Great Lakes region.

Yet out in the eastern part of the U.S., states are experiencing near-record temperatures in the 60s and 70s.

Temperatures in New York City and Boston will hit highs in the low 60s, while Philadelphia will see temperatures reach 67 and Washington D.C. will reach 70 on Saturday.

The storms moving across the country will push those temperatures out on Sunday night and colder air will be back starting Monday.

A storm system will impact the Pacific Northwest Saturday morning and bring high winds and rain along the coast, extremely dangerous surf and waves of up to 30 feet high as well as heavy mountain snow.

By Monday, the region will be hit with a second storm that will bring more rain, wind and snow.

Sat Jan 11 , 2020
“We cannot bear it any longer,” a journalist said on social media. January 11, 2020, 7:27 PM 6 min read Iranians are taking to social media to express their grief, shock and anger after authorities admitted that the Iranian military had “unintentionally” shot down the Ukrainian passenger plane that crashed […]