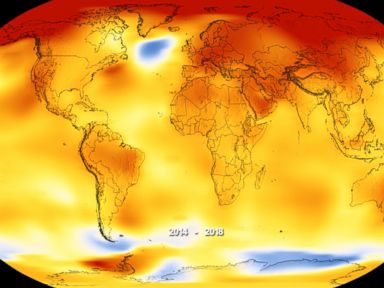 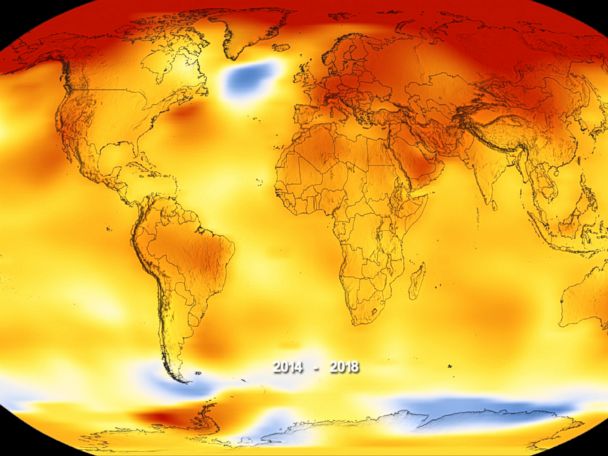 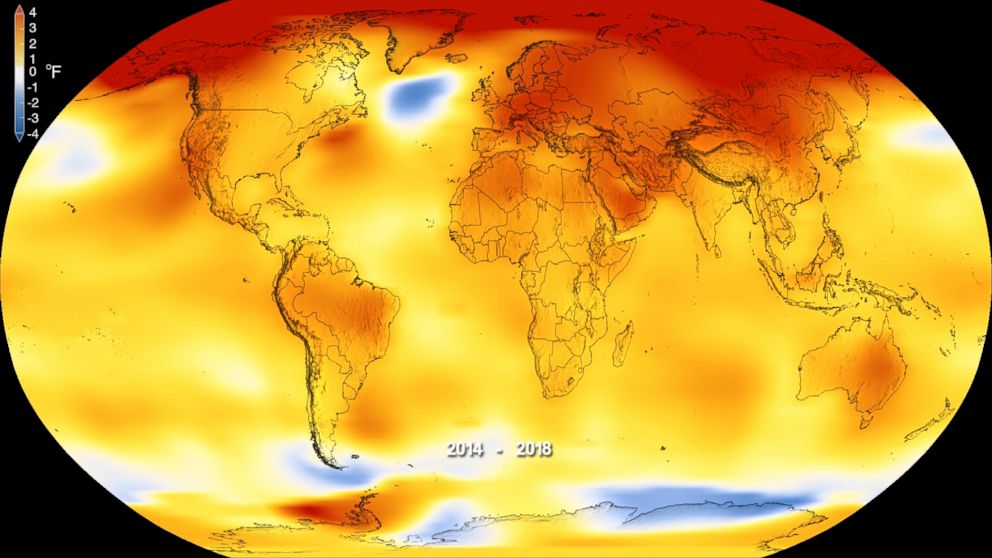 The past five years are the warmest in recorded history, scientists from NASA and NOAA announced Wednesday, part of a continued trend of higher temperatures around the world.

The 2018 data shows the last five years are now the warmest since 1880, according to government scientists.

Despite continued data showing the impacts of climate change it did not come up in President Donald Trump‘s State of the Union message Tuesday night and has not been a priority for the administration.

Overall temperatures around the world were 1.5 degrees warmer than mean temperatures from 1951 to 1980, according to scientists at NASA’s Goddard Institute for Space Studies in New York.

The average global surface temperature has risen about 2 degrees Fahrenheit since the 1880s, which is largely driven by releases of carbon dioxide and other greenhouse gases by human activities.

Climate scientists around the world have raised the alarm about the danger of climate change and a warming climate in the last year. A major climate report from a panel of the United Nations found time is running out to drastically reduce emissions and slow warming temperatures and a U.S. government report detailed risks to various parts of the U.S. from extreme weather events and threats to the economy.

The Trump administration has downplayed threats from climate change and point out that the U.S. has reduced its carbon dioxide emissions in recent years. But scientists say that won’t directly impact global temperatures because emissions all mix in the atmosphere and worldwide emissions are still going up.

“We still collectively have our foot on that accelerator and while there are some indications in some parts of the world that people are working quite hard to reduce those emissions, collectively we are not doing so, so when you’re trying to predict what happened to the climate its always a global issue,” Schmidt said on a call with reporters.

The night after President Trump delivered his State of the Union speech, which did not include any mentions of climate change, Democrats held two hearings to highlight their focus on putting the issue back on the agenda. Two House committees held concurrent hearings on climate change Wednesday, the first time in years each committee has taken on the topic.

“Today we turn the page on this Committee from climate denial to climate action. The Democratic majority is here to listen to the people. To work for the people. To hear from Americans across the country, from all walks of life, whose experiences emphasize the need to address this crisis,” House Natural Resources Committee Chairman Raul Grijalva, D-New Mexico, said in his opening statement.

“The rest of the world understands the urgent need to take action on climate change. The Trump administration chooses to mock science and mislead the public about what our country will look like if we do nothing.”

Ranking Member Rob Bishop, R-Utah, raised concerns the hearing was too broad and not focused enough on the committee’s jurisdiction, which is federal conservation programs. Bishop said he wants to the committee to spend more time talking about how forests can be managed to promote clean air and protect states from smoke pollution as a result of wildfires in states like California.

The federal government’s approach to managing forests to prevent wildfires has been a topic of discussion from Republicans and the administration, and Bishop said he would prefer to talk about that because it’s actually within the committee’s jurisdiction.

“I have to mention I’m kind of a loss, I don’t know where this hearing is going or the other six you have planned because you haven’t told us what the goal is. At some point we may be asking, where are we going? What is the real legislation to help people that is supposed to come out of these hearings? To understand whether these hearings are for those of us around the horseshoe that are going to make legislation or this group that’s sitting at a table in the corner so they can write cute stories,” Bishop said, point toward reporters in the hearing room.

Grijalva said the committee will be able to address a variety of issues as it holds hearings on climate change this year.

Freshman lawmaker Rep. Deb Haaland, D- New Mexico, gave an emotional thanks to one of the witnesses 16-year-old Nadia Nazar, a co-founder of the youth-led Zero Hour Movement.

“I, first of all, would like to thank Ms.Nazar for your commitment and your sacrifice to the things you believe in. I almost want to apologize to you and the youth of this world who go to bed every night worrying about what will happen to our communities because of climate change and I just want to recognize your presence her,” Haaland said.

But Massachusetts Gov. Charlie Baker, in response to comments that the administration should encourage technological advances to limit emissions instead of new policies, said past policy efforts have worked and show policies can make a difference when it comes to climate change.

“The northeast United States, when I was a much younger person, had a huge issue with acid rain which was mostly coming from the midwest. And that was a big problem as an environmental issue there was a lot of debate and discussion about it but a combination of state and federal policies over time basically solved it,” Baker said, adding a similar combination of state and federal policies have helped contribute to the recovery of the ozone layer.

“Pretty clear indications that you can make a difference on big issues with policy.”